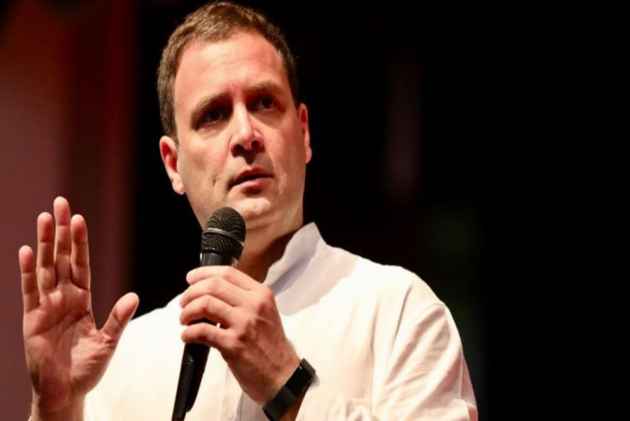 The Congress today termed BJP leader B S Yeddyurappa's oath as chief minister of Karnataka "farcical" and said the party's "irrational insistence" on forming a government in the southern state when it does not have the numbers made a mockery of the Constitution.

While Congress president Rahul Gandhi said India mourns the defeat of democracy, the party's communications in-charge Randeep Surjewala described the events in Karnataka as a "black spot" on the country's democracy that will be erased

The comments came after BJP legislature party leader B S Yeddyurappa was sworn in as the chief minister of Karnataka for a second time today, after an overnight high-voltage legal battle in the Supreme Court which refused to stay his swearing-in.

"The BJP's irrational insistence that it will form a Govt. In Karnataka, even though it clearly doesn't have the numbers, is to make a mockery of our Constitution.

"This morning, while the BJP celebrates its hollow victory, India will mourn the defeat of democracy," he said on Twitter.

He echoed the theme later in the day while addressing a gathering at the 'Jan Swaraj Sammelan' on the occasion of the silver jubilee of 73rd and 74th amendment in the Constitution in Raipur.

He accused the BJP and the RSS of capturing every democratic institution in country.

Referring the press conference called earlier by Supreme Court judges on various issues relating to the apex court judiciary, Gandhi said, "The judiciary is under fear, the press is under fear and even the BJP's Members of Parliament are under the same fear as they cannot speak a single word before the prime minister (Narendra Modi)."

According to Gandhi, the Constitution is under severe attack in the country with MLAs are on one side and the governor on the other.

His colleague Surjewala said the Raj Bhawan has been converted into the BJP office.

"A farcical Oath of CM's post, A fraud being played on majority,

"A treachery with Constitution, A deception with democracy,

"That is Governor Karnataka illegally swearing in #BSYeddyurappa-turning the Raj Bhavan into BJP Office.

"This Black Spot on India's democracy will be erased," he said on Twitter.

The apex court, which commenced the unusual hearing at 2.11 am and ended at 5.28 am, has made it clear that the swearing-in and the government formation in the state would be subject to the final outcome of the case before it.

Yeddyurappa has 15 days to prove his majority in the Assembly.

The BJP has 104 MLAs in the House, eight short of the magic figure of 112. The Congress and the JD(S), which have announced a post-poll tie-up, have won 78 and 37 seats respectively.