The motorcycle that is your best bet to become a better rider around the racetrack is back in a better avatar. Meet the new Yamaha R15 Version 3.0

Yamaha has finally launched the new R15 Version 3.0 in India to the delight of two-wheeler enthusiasts. The 2018 Yamaha R15 Version 3.0 has been priced at Rs 1.25 lakh, which makes it about Rs 8,000 more expensive than its predecessor. Yamaha has been testing the new R15 in India for the past few months and there have been many spy shots of the motorcycle on the internet too.

There is one big difference between the India-spec R15 Version 3.0 and the international model and that is the missing USD forks, done to keep costs under check. How much have the telescopic forks altered the handling dynamics of the new motorcycle is something that we can only tell once we get our hands on the bike for a road test. It will compete against the Bajaj Pulsar RS 200 and the KTM RC 200 in our two-wheeler market.

When it comes to styling, the Yamaha R15 has always been a handsome-looking motorcycle and the new R15 continues this tradition. One is welcomed by a nicely sculpted, chiselled face with sharp twin-LED headlamps. Yamaha designers have continued the sharp lines on the fairing and the tail section, which makes the new R15 look appealing. Our only grouse will be the large exhaust muffler that feels a bit out of place on the bike. Also, for the first time, the Yamaha R15 has been equipped with a fully digital instrument console. 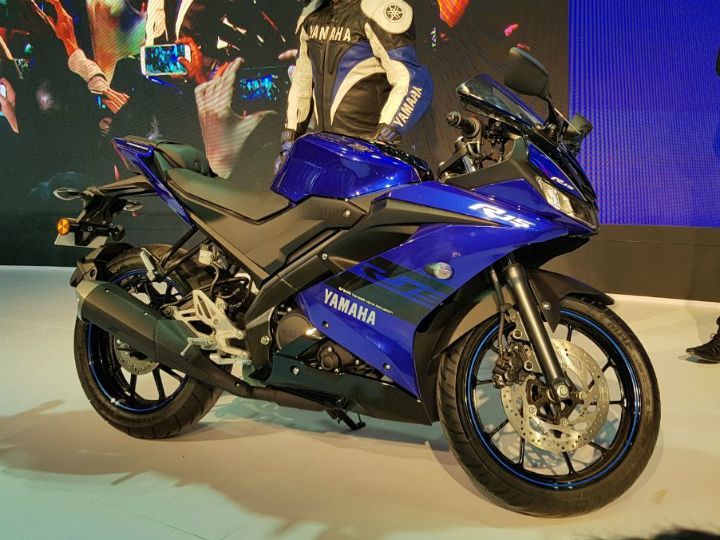 Powering the R15 Version 3.0 is a 155cc displacement motor which is the bored out version of the older mill, now with 58mm bore and 58.7mm stroke and variable valve actuation (VVA). The single cylinder engine delivers 19.3PS at 10,000rpm, which is 2.3PS more than its predecessor. The torque figure remains unchanged at  14.7Nm at 8,500rpm. Power is transmitted via a 6-speed gearbox and it gets a slipper clutch too. Yamaha also claims a 4.7 per cent increase in mileage, though it has not specified what that amounts to.

The legendary Deltabox frame has been carried forward on the new motorcycle, while braking is done via disc brakes at both ends. It is only 3kg heavier than its predecessor while seat the height stands at 815mm, an increment of 15mm over the older bike.