Watch: Video Of Body Dangling From Chopper In Afghanistan Surfaces Hours After US Exit

Soon after the US' exit, disturbing videos showing a purported US chopper with a body dangling from it went viral on social media. 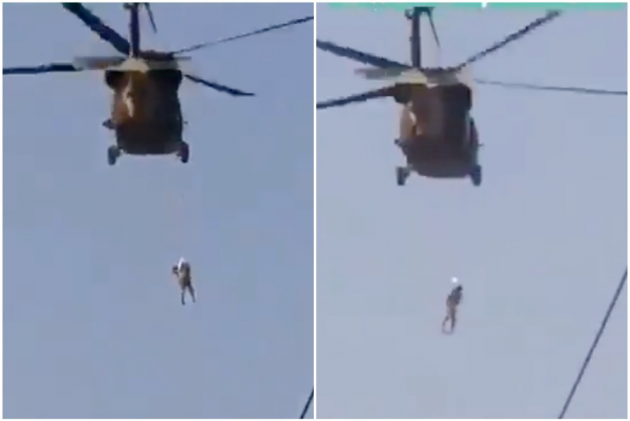 Even as the United States exited from the war-ravaged Afghanistan on the designated deadline of August 31, concerns over the Taliban's next course of action and the future of the nation have left the world waiting in ominous anticipation.

Soon after the US' exit, disturbing videos showing a purported US chopper with a body dangling from it went viral on social media. The video reportedly showed the chopper 'patrolling' over Kandahar with a Twitter account named 'Talib Times' sharing it as a video of 'Islamic Emirates Airforce Helicopter.  The Twitter account's bio describes it as the "the English language official account of Islamic Emirate Afghanistan.

The video left many horrified on social media.

Our Air Force!
At this time, the Islamic Emirate's air force helicopters are flying over Kandahar city and patrolling the city. pic.twitter.com/rlE6nUldZf

Glimpses Through The History Of 20-Years American War

The video appeared on social media aven as American President Joe Biden announced that the US has ended its longest war in Afghanistan, hours after the final US evacuation plane flew out of Kabul airport amidst celebratory gunfire from the Taliban.

Celebratory gunfire and fireworks erupted across Kabul as Taliban fighters took control of the airport following the withdrawal, proclaiming “full independence” for Afghanistan.

Critics claim that the US exit may have left the war-ravaged country in disarray and its future uncertain under the rule of hardline Islamist militants.

The C17 aircraft's departure from Kabul's international airport was the final chapter in a contentious military effort, which eventually saw the US handing Afghanistan back to the very Islamist militants it sought to root out when American troops entered the country in 2001.

“Now, our 20-year military presence in Afghanistan has ended,” Biden said on Monday, thanking the armed forces for their execution of the dangerous retrograde from Afghanistan with no further loss of American lives.

“For now, I will report that it was the unanimous recommendation of the Joint Chiefs and of all of our commanders on the ground to end our airlift mission as planned.

“Their view was that ending our military mission was the best way to protect the lives of our troops, and secure the prospects of civilian departures for those who want to leave Afghanistan in the weeks and months ahead,” Biden said, defending his decision to stick with the August 31 deadline despite mounting criticism from political opponents, and even from some allies.