World leaders have condemned a series of blasts in Sri Lanka that killed more than 207 people on Sunday, including dozens of foreigners 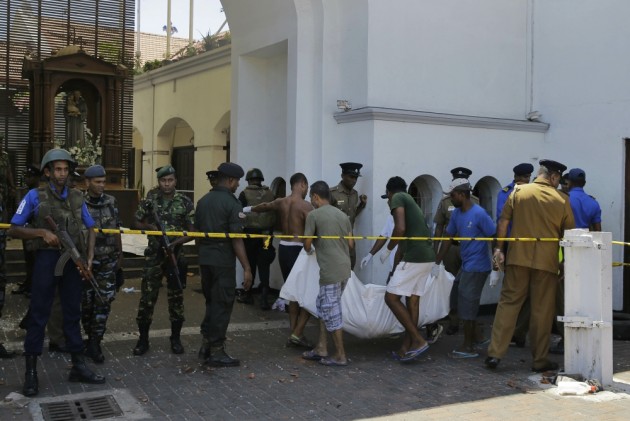 More than 207 people have been killed in eight coordinated explosions that rocked churches and luxury hotels frequented by tourists in Sri Lanka on Easter Sunday, in one of the deadliest blasts in the country's history, officials said.

The Sri Lankan government ordered a night-time curfew which will begin on Sunday night at 6:00 pm (local time) and run until 6:00 am (local time), the defence ministry said. Meanwhile, security has been intensified around the religious places across the capital.

The government has decided to block all social media platforms in order to prevent incorrect and wrong information being spread. This is only a temporary measure", a release from Udaya R Seneviratne, Secretary to the President said.

Here are the LIVE updates:

Briefing reporters, Gunasekera said the police was not able to confirm at the moment if they were all suicide attacks. He, however, said that one of the blasts at the Katuwapitiya (Negombo) church has signs of being what looked like a suicide attack.

4:20 pm: Prime Minister Narendra Modi called up the president and the premier of Sri Lanka and conveyed heartfelt condolences over the loss of lives in terrorist attacks in the island nation on Sunday.

During his conversations with Sri Lankan President Maithripala Sirisena and prime minister Ranil Wickremesinghe, Modi condemned the serial terrorist attacks in the strongest terms, perpetrated at sites including religious places and during a religious festival, according to a statement from the Prime Minister's Office.

4:10 pm: Russian President Vladimir Putin has denounced a series of attacks on churches and hotels in Sri Lanka as "cruel and cynical."

In a telegram of condolences sent to his Sri Lankan counterpart, the Russian leader said Moscow remains a "reliable partner of Sri Lanka in the fight against international terrorism."

4:05 pm: British Prime Minister Teresa May has condemned what she called the "truly appalling" attacks in Sri Lanka.

May said on Twitter that "The acts of violence against churches and hotels in Sri Lanka are truly appalling, and my deepest sympathies go out to all of those affected at this tragic time."

4:00 pm: Pope Francis on condemned the "cruel violence" of the Easter Sunday attacks in Sri Lanka and is praying for all those who are suffering from the bloodshed.

Speaking from the loggia of St. Peter's Basilica, Francis said: "I want to express my loving closeness to the Christian community, targeted while they were gathered in prayer, and all the victims of such cruel violence."

He added: "I entrust to the Lord all those who were tragically killed and pray for the injured and all those who are suffering as a result of this dramatic event."

3:30 pm: Sri Lankan government declares curfew across the country from 6 pm Sunday to 6 am Monday

3:15 pm: Eighth explosion reported from a housing complex in Colombo.

3:00 pm: Sri Lankan police say 2 people have been killed at a hotel in Colombo in the seventh blast has that hit the island country on Sunday

2:55 pm: In a statement, condemning the blasts in Sri Lanka, the Ministry of External Affairs said India was standing together with the people and the government of Sri Lanka in this hour of grief.

"We strongly condemn the serial blasts on multiple locations in Sri Lanka today morning in which many people have been killed and injured. We extend our deepest condolences to the families of the victims and to the people and Government of Sri Lanka. We wish speedy recovery to those injured in the attacks," the statement said.

2: 55 pm: Prime Minister Narendra Modi condemned the blasts in Sri Lanka and said there is "no place for such barbarism in our region. India stands in solidarity with the people of Sri Lanka"

Strongly condemn the horrific blasts in Sri Lanka. There is no place for such barbarism in our region. India stands in solidarity with the people of Sri Lanka. My thoughts are with the bereaved families and prayers with the injured.

At least 207 people were killed and around 500 others injured in a string of eight powerful blasts, including suicide attacks, that struck three churches and luxury hotels frequented by foreigners in Sri Lanka on Easter Sunday, shattering a decade of peace in the island nation after the end of the brutal civil war with the LTTE.

The blasts - one of the deadliest in the island nation's history - targeted St Anthony's Church in Colombo, St Sebastian's Church in the western coastal town of Negombo and a church in the eastern town of Batticaloa around 8.45 a.m. (local time) as the Easter Sunday mass were in progress, police spokesman Ruwan Gunasekera said. Three explosions were reported from the five-star hotels - the Shangri-La, the Cinnamon Grand and the Kingsbury in Colombo.

Soon after the eighth blast, the government imposed curfew with immediate effect.

No group has claimed responsibility for Sunday's attacks.