The 47-year-old Australian national has been holed up in a back room of the Ecuador embassy in central London for nearly seven years for fear of being extradited to the US. 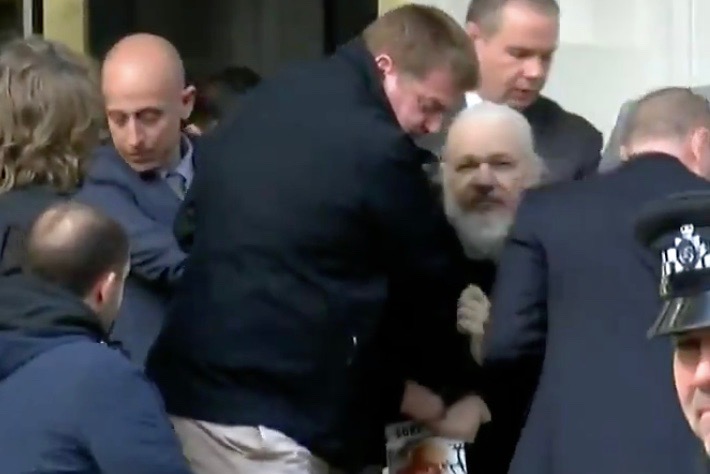 Julian Assange, the founder of WikiLeaks, was arrested at the Ecuadorian Embassy in London on Thursday after he was refused asylum granted to him for seven years.

He had taken refuge there to avoid extradition to Sweden in a sexual assault case that has since been dropped.

The 47-year-old Australian national has been holed up in a back room of the Ecuador embassy in central London for nearly seven years now, for fear of being extradited to the US, where he faces a possible death sentence or torture for WikiLeaks' alleged leak of secrets.

Julian Assange was arrested inside the Ecuadorian Embassy in London, where he had holed himself up for seven years. pic.twitter.com/oWBupXyCm8

The U.S. Attorney's Office announced Assange was arrested pursuant to the U.S./U.K. extradition treaty "in connection with a federal charge of conspiracy to commit computer intrusion for agreeing to break a password to a classified U.S. government computer."

Unsealed court documents reveal the charge relates to Assange's alleged "conspiracy" with former U.S. Army intelligence analyst turned whistleblower Chelsea Manning to hack into U.S. Department of Defense computers in March 2010, in "one of the largest compromises of classified information in the history of the United States," ABC news reported.

Carlos Poveda, Assange's lawyer in Ecuador, confirmed to ABC News that Assange had also been arrested on a U.S. extradition request. He also claimed the arrest contravened international conventions on human rights.

WikiLeaks rose to fame in 2010, when it published a collection of classified US documents leaked by Chelsea Manning, the former Army intelligence analyst, who shared military and diplomatic secrets.

Scotland Yard confirmed the arrest and said its officers had executed a warrant against Assange, dating back to June 2012, for breach of bail conditions.

WikiLeaks in its response to the arrest, accused Ecuador of “illegally” terminating Assange’s “political asylum in violation of international law," as per the report by CNBC.

URGENT: Ecuador has illigally terminated Assange political asylum in violation of international law. He was arrested by the British police inside the Ecuadorian embassy minutes ago.https://t.co/6Ukjh2rMKD

“Julian Assange did not ‘walk out of the embassy’. The Ecuadorian ambassador invited British police into the embassy and he was immediately arrested,” WikiLeaks said in another tweet.

In 2012, Assange claimed that if he was extradited to Sweden, he might be arrested by the US and face charges relating to WikiLeaks's publication of hundreds of thousands of US diplomatic cables.

Scotland Yard said in a statement that it was invited into the embassy by the Ambassador, following the Ecuadorian government's withdrawal of asylum.

"The MPS had a duty to execute the warrant, on behalf of Westminster magistrates court, and was invited into the Embassy by the Ambassador, following the Ecuadorian government's withdrawal of asylum," a Met Police statement said.

UK Home Secretary Sajid Javid tweeted, "Nearly seven years after entering the Ecuadorian Embassy, I can confirm Julian Assange is now in police custody and rightly facing justice in the UK. I would like to thank Ecuador for its cooperation & metpoliceuk for its professionalism. No one is above the law."

Nearly 7yrs after entering the Ecuadorean Embassy, I can confirm Julian Assange is now in police custody and rightly facing justice in the UK. I would like to thank Ecuador for its cooperation & @metpoliceuk for its professionalism. No one is above the law

Edward Joseph Snowden, the former NSA contractor who leaked classified documents on US  surveillance program around the world in 2013, tweeted in response to Assange's arrest.

Images of Ecuador's ambassador inviting the UK's secret police into the embassy to drag a publisher of--like it or not--award-winning journalism out of the building are going to end up in the history books. Assange's critics may cheer, but this is a dark moment for press freedom. https://t.co/ys1AIdh2FP

Important background for journalists covering the arrest of Julian #Assange by Ecuador: the United Nations formally ruled his detention to be arbitrary, a violation of human rights. They have repeatedly issued statements calling for him to walk free--including very recently. pic.twitter.com/fr12rYdWUF

US authorities never officially confirmed that they charged Assange, but in November 2018, a mistake in a document filed in an unrelated case hinted that criminal charges might have been prepared in secret.

The court filing, submitted apparently in error by US prosecutors, mentioned criminal charges against someone named "Assange", even though that was not the name of the defendant.

Legal analysts said the error was likely to have been caused by prosecutors copying and pasting from sealed documents.

The Swedish woman, who alleged that she was raped by Julian Assange during a visit to Stockholm in 2010 welcomed his arrest.
Elisabeth Massi Fritz, who represents the unnamed woman, said news of Assange's arrest was "a shock to my client" and something "we have been waiting and hoping for since 2012".
Ms Massi Fritz said in a text message sent to the Associated Press, that "we are going to do everything" to have the Swedish case reopened "so Assange can be extradited to Sweden and prosecuted for rape".
Prime Minister Theresa May also welcomed the arrest of Julian Assange for breach of bail with open arms.
"I'm sure the whole House will welcome the news this morning that the Metropolitan Police have arrested Julian Assange, arrested for breach of bail after nearly seven years in the Ecuadorian embassy," she told the Commons.
"This is now a legal matter before the courts... This goes to show that in the UK nobody is above the law," she added.
(With inputs from agencies)
For in-depth, objective and more importantly balanced journalism, Click here to subscribe to Outlook Magazine