To stop the spread of the coronavirus, millions of federal employees must provide confirmation of receiving a coronavirus vaccine or adhere to regular testing, social distance, masking, and travel restrictions. 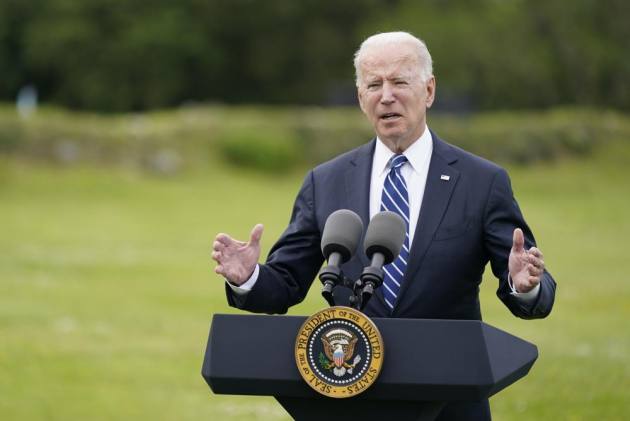 President Joe Biden's requirement for federal workers to reveal their COVID-19 vaccination status is likely to force uncomfortable questions not only at government agencies but at private companies as well.

Getting the policy right will take time, and vary across government agencies. The same holds for private companies, for which the White House is trying to provide a guide. It's not like there's a cheat sheet. Nothing on this scale has been attempted before in the face of a virus morphing in real-time to become a bigger threat.

“We developed a miracle vaccine in a very short period of time, and there has been a lot of hesitancy from the government and from businesses to run with a top-down approach," said Andrew Challenger, senior vice president at the workforce consulting firm Challenger, Gray & Christmas.

"Now we've reached a point where it's become very clear the individual incentive people have to protect themselves has not been strong enough to protect the country, and we're seeing the government take this first step.”

Biden's plan for the federal workforce, announced Thursday, stopped short of a direct order for feds to roll up their sleeves.

Instead, workers will have to attest to whether they're vaccinated. Although employees will not be required to produce a vaccination card, “attest” is a loaded word in the federal workplace, minutely governed by rules and regulations. It implies consequences for providing false or misleading information. How that will be enforced remains unclear, but employees who voluntarily provide valid proof of vaccination will likely settle potential questions upfront.

The unvaccinated will have to put up with regular testing, required masking and social distancing, and they will be barred from official travel. Similar rules will be applied to federal contractors.

Continual testing raises other issues. For most people, health insurance has been paying. But will that continue if someone refuses to be vaccinated and is not eligible for medical or religious exemptions?

Masking has been a perennially touchy subject. But how will agencies enforce a masking policy if not everyone is required to be vaccinated? Will supervisors patrol the cubicles with lists of the unvaccinated?

There are many reasons why translating Biden's order to the workplace may not go smoothly. Government agencies tend to have their own unique cultures, and their missions run the gamut. Doctors at the National Institutes of Health are probably already vaccinated, but some law enforcement agents may be wary of getting a shot not yet fully approved by the Food and Drug Administration.

The largest union representing federal workers, the American Federation of Government Employees, already served to notice it expects any changes to working conditions will be “properly negotiated with our bargaining units prior to implementation.”

As for the Pentagon, it's been ordered to study how and when COVID-19 vaccines will become mandatory for military personnel. Service members are already required to get as many as 17 vaccines, depending on where they are based around the world.

Even as Biden laid out his federal plan, some companies like Google were already ahead, saying they will simply require vaccination. But the U.S. Chamber of Commerce, the country's largest business organization, seconded Biden's actions as “prudent steps to protect public health and our economic recovery.”

For public or private employees, the first and most important questions revolve around proving their vaccination status and qualifying for exceptions, said Jeff Hyman, a business author, and recruitment expert.

“Are they going to take it on faith?” asked Hyman. There is no central database that records vaccinations.

“What is the exceptions policy?" he continued. "There have got to be exceptions for religious and medical reasons, and that asterisk is going to be really important.”

But if workers seek a religious exemption, will they have to submit a note from a clergyperson?

The federal Equal Employment Opportunity Commission says an employer must provide “reasonable accommodation" for medical or religious reasons "that does not pose an undue hardship on the operation of the employer's business.”

But companies can legally require vaccination as a “condition of employment,” the Justice Department said in a recent opinion.

Biden is taking a risk here, said Hyman, but doing nothing in the face of rising cases driven by the aggressive delta variant was not an option.

“This is super-easy to second-guess because you only find out in hindsight if you were right,” Hyman said. “We're not going to know for a while whether this was the optimal decision, but at least he is doing something.”

News that the economy has surpassed its pre-pandemic size only underscores the significance of Biden's move. More outbreaks and shutdowns could dampen hiring and production, creating a new political narrative for Republicans trying to regain control of Congress next year.

Then there's the often delicate issue of workplace etiquette. How will unvaccinated employees interact with their peers who have gotten their shots? Will work units have to be split apart?

Challenger, the workforce consultant, said his company has developed a system for everyone to discreetly signal their comfort level with the interaction during workplace re-entry. It involves wrist bands colored green, yellow, and red.

Green means a person is comfortable with things going back to the way they were before. Red signals others to stay 6 feet away. Yellow is an in-between zone, implying some hesitancy about chumminess.

“This is such a novel situation, there are not a lot of best practices for us to follow,” he said.