The two girls, Raveena (13) and Reena (15), and their spouses petitioned the Islamabad High Court on March 25 against alleged harassment by police after their father and brother alleged that the girls were forced into changing their religion, and then married to Muslim men. 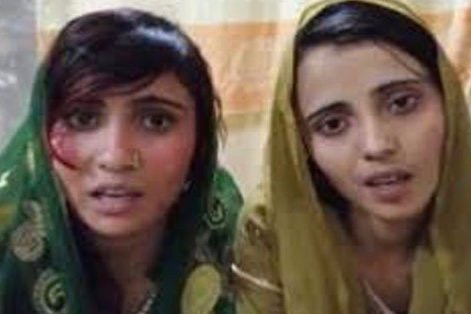 Days after Indian External Affairs Minister Sushma Swaraj engaged in a Twitter spat with a Pakistan Minister over the abduction and forced conversion of two Hindu girls in Sindh province, a Pakistan high court on Thursday declared that the two Hindu teenage sisters were not forcibly converted and permitted them to live with their spouses.

The two girls, Raveena (13) and Reena (15), and their spouses petitioned the Islamabad High Court on March 25 against alleged harassment by police after their father and brother alleged that the girls were underage, abducted, forced into changing their religion, and then married off to Muslim men.

In their plea, the girls claimed that they belong to a Hindu family of Ghotki, Sindh but converted wilfully as they were impressed by Islamic teaching, Dawn reported.

The counsel for the girls' parents, however, asserted that the case pertained to forced conversion.

On March 25, Swaraj had got into a Twitter spat with Pakistan Information minister Chaudhury Fawad Hussain over reports of the kidnapping of the two Hindu girls a day before the Holi festival.

Sushma Swaraj asked the Indian High Commissioner in Islamabad, Ajay Bisaria, for a report on the abduction.

Bisaria said that he would share the details shortly.

However, the Indian minister’s tweet left Pakistan Information minister Chaudhury Fawad Hussain, a key aide of Pakistan Prime Minister Imran Khan, irked. “Mam its Pakistan’s internal issue and rest assure it’s not Modi’s India where minorities are subjugated. Its Imran Khan’s Naya Pak where white color of our flag is equally dearer to us. I hope you’ll act with same diligence when it comes to rights of Indian Minorities (sic),” he responded.

Swaraj hit back at Hussain stating that his comment only exposed Pakistan’s guilty conscience.

Islamabad High Court Chief Justice Athar Minallah had constituted a five-member commission to probe whether the conversion of the Hindu sisters to Islam was forced or otherwise.

The secretary interior, Azam Suleman, apprised the high court about the findings of the commission, and told the court that as per the commission's opinion, it was a facilitated conversion, the report said.

Rehman pointed out in court that "there is no law in Pakistan against forced conversions" and sought a court decree in this regard.

Minallah remarked that the case of the Ghotki sisters was a simple one and would have been decided in a day or so, but a commission comprising eminent professionals and scholars was constituted keeping in view the sensitivity of the case since "the court wanted to ensure this was not a forced conversion".

Regarding the issue of forced conversions, the court sought the commission's recommendations within four weeks and adjourned the case until May 14.

The teenage sisters were allegedly kidnapped by a group of "influential" men from their home in Ghotki district in Sindh on the eve of Holi. Soon after the kidnapping, a video went viral in which a cleric was purportedly shown soleminising the Nikah (marriage) of the two girls, triggering a nationwide outrage.

Prime Minister Imran Khan also ordered probe to ascertain if the two girls were abducted and forcibly converted and married.