Why We Love To Hate Ms Roy

Deconstructing the complex Indian responses to Arundhati Roy reveals layers of prejudice. Apart from the macho male response, more intriguing is the Indian response to her at a personal level... 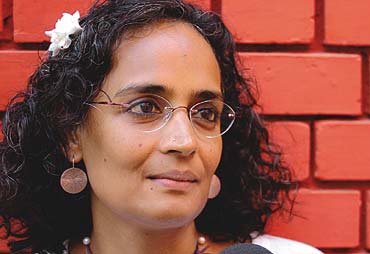 Arundhati Roy certainly has a stomach for controversy. By writing several articles and providing an introduction to a book defending Mohammad Afzal Guru (13 Dec, A Reader: The Strange Case of the Attack on the Indian Parliament), the main accused in the December 13, 2001, attack on the Indian Parliament, she has stuck her neck out again. Ever since the lady made her views on the matter public, many furious friends have called. "Who does that woman think she is?" they have thundered, accusing her of "passing off conspiracy theories as investigations". As far as they are concerned, Roy should be the first citizen in their rogue’s gallery of ‘anti-national’ elements. No other writer inspires as much anger and mountains of hate mail to publications where she writes as this ‘petite woman’.

So when a foreign journalist recently asked me how Roy is perceived by Indians, the best reply I could come up with is that we have a love-hate relationship with her. I then checked the Net and found an old essay in the Observer, London. "Is India just jealous of Arundhati Roy," asked the paper which profiled her under the headline ‘The Dam Buster’. The same day the Sunday Times carried a full-page article that somewhat absurdly equated Roy with Victoria Beckham, both described as "role models for young British women". Ridiculous as the comparison between a sexy footballer-wife-pop-star and a serious novelist-essayist may be, it does reveal that Roy has been an icon in the West for some years now.

But what of her status back home in India? She’s certainly not the sort of role model that utters platitudes and makes us feel good about ourselves. On the contrary, she manages to ruffle many Indian feathers. Deconstructing the complex Indian responses to Roy reveals layers of prejudice.

First, there is the macho male response to a woman who is not just brilliant and beautiful, but is also blessed with a talent for turning out powerful prose. Roy would be adored by the Indian male if she had been content to sit prettily on a pedestal. Instead, she has repeatedly asked for trouble challenging the big boys when they are playing with their favourite toys: the Big Bomb, the Big Dam, the Big War and now the Big Terrorist.

Even more intriguing is the Indian response to Roy at a personal level. Despite her waif-like appearance, she does not fit the stereotypical Indian woman. If Indian men feel threatened by her, the average woman would probably be deeply confused by her personal carriage. Roy’s sartorial tastes are like a bucket of cold water to a cash-rich middle-class pursuing polyester dreams. Ethnic chic, new-age hippie, Western vogue, all rolled into one. Her mix of colourful peasant style skirts with the casual Western T-shirt is devastatingly trendy, but also very individualistic. 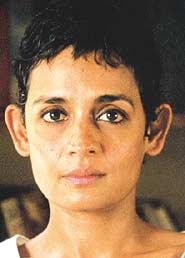 Her haircut, too, is a case in point. Some years ago she changed to a close-cropped style to expose her slightly protruding ears. In one stroke, she challenged the conventional stereotype of beauty. The hair has now grown, but so has Roy’s appetite for courting controversy.

The trendy style, impeccable articulation and high profile causes have certainly made Roy a romantic heroine in the West. In an article titled ‘Grassroots gamine’ the Guardian’s Madeline Bunting wrote: "The next time someone asks you what happened to feminism, you know the answer. It moved south in search of the sun."

But an Indian summer is not a sun-bathing vacation. It is a long, hot, miserable ordeal. Roy’s causes have all landed her in conflict with the Hindu Right that freely bandies the phrase ‘anti-national’. It also portrays her as a lost soul in search of a cause; an individual who is raising issues that an emerging superpower cannot afford to engage with. To some extent, they have succeeded in projecting this image.

Self-absorbed as we are, most Indians are oblivious that Roy’s forceful post-September 11 essay made her an icon not just in the West but also in West Asia. Yet, most of us still think of Roy as a Booker Prize-winning author of a novel we have never read, who inexplicably seems to enjoy slumming it with anti-dam activists and now ‘Muslim terrorists’.

Indians would probably like Roy better if like VS Naipaul and Salman Rushdie, those other great writers they claim as their own (despite both of them living in the West), Roy made grand statements about Islam or Indian civilisation in rarefied writers’ fora and then swiftly retreated from the public stage. Besides, shouldn’t she learn some lessons from Naipaul and Rushdie, both of whom are now on the right side of the great ‘clash of civilisations’ debate?

Yet, Roy seems to prefer clashing with those who believe they know better. But Indians are a forgiving people and her critics would absolutely adore Roy if she moved to the West, where they believe people like her actually belong. Then every Indian heart would swell with pride whenever they recall their great galaxy of English language writers.

But if Roy insists on staying on in India, there are a few things she could do to soften the hatred she often inspires in some Indians. Wear saris, shut up, stay at home, have babies, grow her hair long and start plaiting it.