Home  »  Website  »  Business  » News Analysis  »  Why Is Petrol Price So High In India When That Of Imported Crude Oil Is Low?
News Analysis 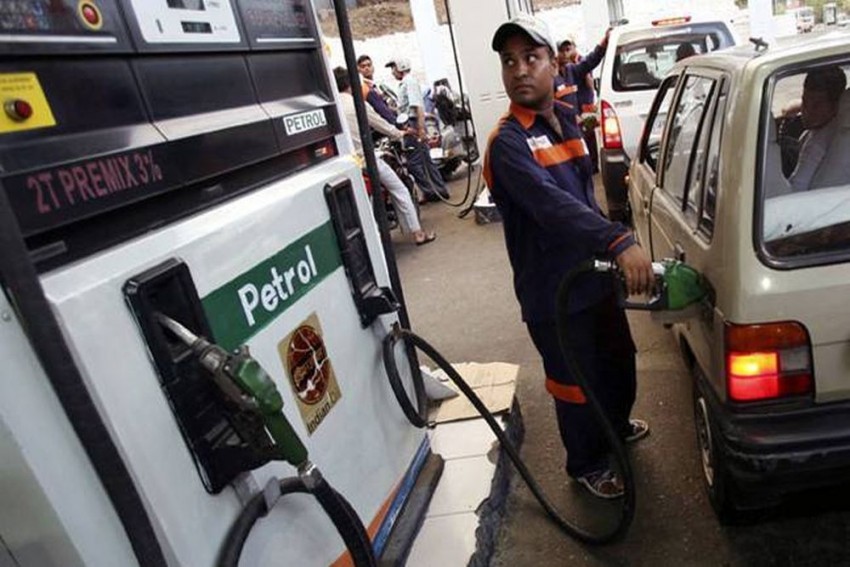 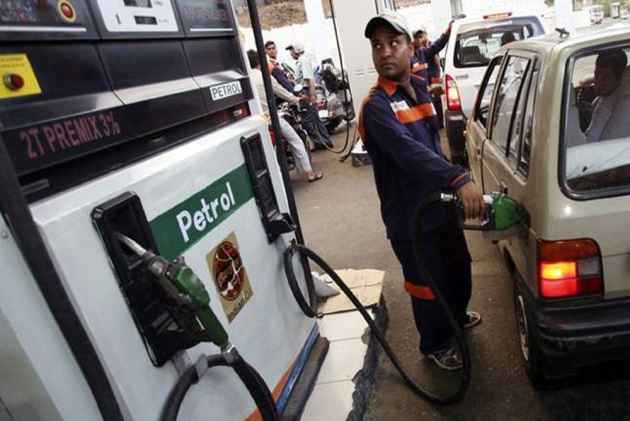 Historically, the Indian Government has controlled the prices of a number of petroleum products. The most important of these products being diesel, petrol, liquefied petroleum gas (LPG) and kerosene. Consumers are charged a low price and the difference in the sales realization of the Oil Marketing Companies (OMCs) and their cost of supply, called under recoveries, were financed by contributions from the Government, upstream oil companies and OMCs. The under recoveries were large as the Government fixed sale prices quite low compared to cost of supply.

Following the Report of the Expert Group on Viable and Sustainable System of Pricing of Petroleum Products (Parikh et al, 2010), petrol price was freed and linked to import price of crude oil and market determined. Diesel price was however not liberalized due to a concern for inflation caused by the increase in its price.

Following this, IRADe did a study (Parikh et al, 2012) supported by Shakti Sustainable Energy Foundation and Ministry of Finance, which established that while an increase in diesel prices to eliminate the diesel subsidy would lead to a slight uptick in inflation in the short run, over the medium term the rate of inflation would be much lower and the GDP much higher than what will prevail if the diesel price was not liberalized. Also, the impact on consumers of higher diesel price due to removal of the subsidy would be less than half a percent of their level of consumption. Subsequently, the diesel subsidy was eliminated with the price being gradually increased by INR 0.5/litre every month from 2013.

The price of Indian basket of crude oil has ranged from US$ 112 per barrel in 2011-12 to a low of US$ 46 per barrel in 2015-16. The price in April 2018 is US$ 77.90 per barrel. The sale price of petrol and diesel in Delhi 8th April 2018 were Rs 74.03 and Rs 64.96 per litre. The prices at which a dealer gets petrol and diesel are much lower and the difference is largely due to the excise tax imposed by the central government and the value added tax (VAT) imposed by the state governments. 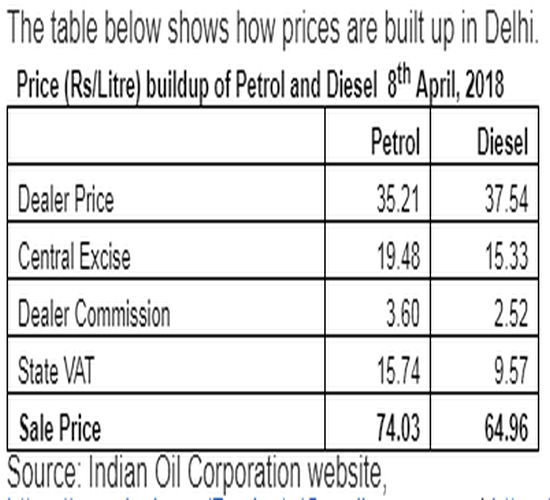 The taxes increase the sale price of petrol by more than 90 % over the dealer price including commission and that of diesel by more than 60 %. While the central excise tax is specific the state VAT is ad valorem.

What is the prospect of international crude price? Would it be even higher than now?

I would be surprised if the price of crude exceeds US$ 80 per barrel. This is because the USA now produces much more oil and gas than before and has a potential to produce even more. Also, the Organisation of the Petroleum Exporting Countries (OPEC) should be wary of the long term impact of higher oil price as it would accelerate the development of electric mobility, public transport, more fuel efficient vehicles and smaller vehicles. OPEC’s short term gain from raising crude price may be more than offset by their long term losses.

There is still a significant difference between price of diesel and that of petrol, due to differential rates of excise tax imposed by Central Government, which is further accentuated by differences in the VAT rates imposed on diesel and petrol by states. This price differential distorts consumer allocation and is not desirable.

The grades of diesel now available in India produce have much higher particulate matter and other pollutants than petrol and that are known to cause high carcinogenic emissions, compared to petrol leading to health and environment issues environmental issues. As diesel vehicles have proliferated, the incidence of asthma and other lung diseases directly linked to air pollution has shot up.  Rational diesel and petrol prices will reduce use of diesel. Lower use of diesel will also reduce cost of refining. Diesel constitutes such a large fraction of India’s consumption of petroleum products that refineries have to use hydrocracking to increase production of needed amount of diesel. This increases the cost of refining. There is then both economic and environmental reasons to rationalize tax rates so that this distortion is reduced.

Why are taxes so high? To understand that we need to look at the revenue that Centre and States obtain from taxes on diesel and petrol.

Petro-products are one of the key source of revenue for Governments at both Central and State levels.  One of the key question for price rationalization of diesel and petrol will be its budgetary implications. The excise revenue was 23 % of the total tax revenue (inclusive of States’ share) of the Central government in 2016-17 revised budget. The excise revenue from diesel and petrol constituted 85 % of the total excise revenue and 19 % of Centre’s total tax revenue. The government is naturally, wary of tinkering with this excise revenue from petrol and diesel. It could however, rationalize the differential excise rates on petrol and diesel in a revenue neutral way. Since diesel consumption is 3.5 times as large as petrol consumption, a one rupee increase in diesel tax rate can lead to a 3.5 rupee reduction in the excise rate on petrol.

Any change in excise duty rates will have a consequent impact on VAT collections (as VAT is calculated as a percentage of the price including excise duty). The importance for States’ budgets of revenue from VAT on petrol and diesel is also significant. VAT rates vary from state to state. The figure below shows VAT rates on Petrol and diesel. 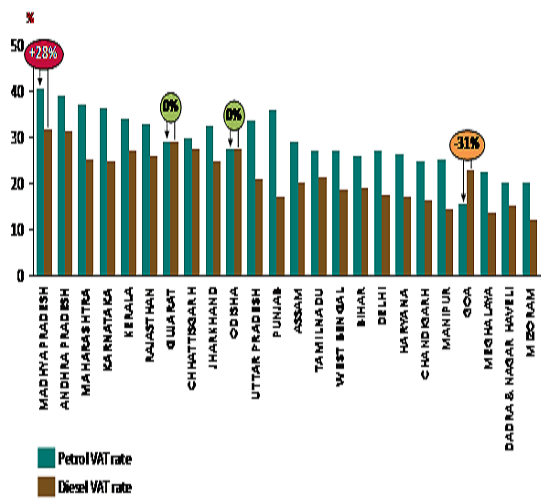 Madhya Pradesh levies the highest VAT rate on petrol of nearly 40 %. The VAT rate on Petrol exceeds 20 % for all but two states of the 24 states shown in the figure. Most states impose a lower VAT on diesel excepting Gujarat and Odisha where the rates are equal and Goa where the rate on diesel is higher. The revenue from VAT on petrol and diesel constitutes around 10 % of states’ budgets.

Therein lies the states’ reluctance to bring petroleum products under goods and services tax (GST) regime. Even the maximum GST rate of 28 %, of which the states’ share will be 14 %, will lead to a drastic reduction in their revenue from VAT on diesel and petrol at present. 14 % share on a price of around Rs 40 / litre (cost to dealer plus dealer commission) means states will collect around Rs 6 /litre. Whereas today, the states collect around Rs 10 / litre of diesel and Rs 15 / litre of petrol. This makes it difficult to arrive at an acceptable GST rate that protects states revenues. This is why diesel and petrol are kept out of GST. Hopefully, once confidence in the GST regime is built up, mechanisms can be found to get an agreement from states about bringing them gradually under GST. Over the transition period states may have to be compensated for their loss in revenue. This will become possible if GST leads to substantial increase in tax collection.

(The author is the chairman of Integrated Research and Action for Development, IRADe. kparikh@irade.org)