'Who Is Better, Rahul Gandhi Or Priya Varrier?': How Twitterati Reacted To Congress Chief's Wink 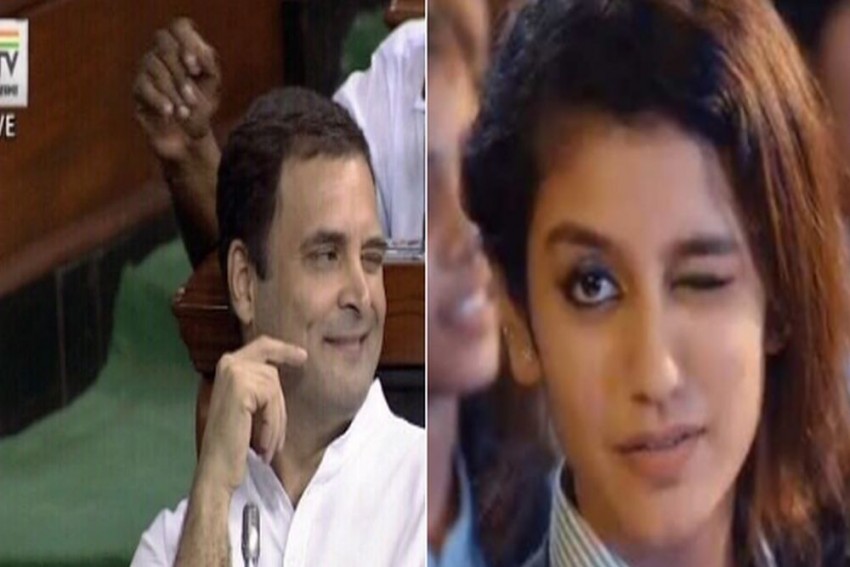 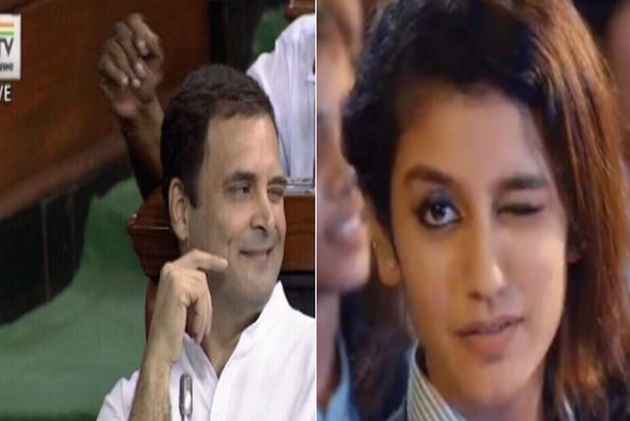 He is known for his hugs, but this was one hug Prime Minister Narendra Modi was not expecting.

After a no-holds barred and scathing criticism of Modi on several issues including Rafale jet deal on Friday, Congress president Rahul Gandhi walked across the green-carpeted well of Lok Sabha to Modi and hugged him, a gesture which took the Treasury Bench members by surprise.

Gandhi's unexpected gesture, which quickly became a favoured video clip for television channels, came during a debate on no-confidence motion moved by the TDP against the Modi government. Gandhi's speech was frequently disrupted and prompting Speaker Sumitra Mahajan to adjourn the House for 15 minutes. When he resumed his speech, Gandhi continued his attack. Just before wrapping up, he strode over to Modi for the now-famous hug.

There was another moment of Gandhi that is going viral online: his wink to his partymen after hugging the PM.  Soon, netizens started making  memes and GIFs, and comparing the Congress president's wink to actress Priya Varrier's viral wink.

Here are they reacted:

Pappu got the new award

#NaMoTrustVote @RahulGandhi enacts Sanjay Dutt and Priya warrior. Not sure whether he stands any chance as PM, but he definitely is a threat to Bollywood :D Already @AmitShah and @narendramodi are irked with "Sampark Se samarthan" & today's RaGa's perf. clean bowled them. pic.twitter.com/Mflffgzuq4

Speaking during the No-Confidence Motion, Gandhi charged the government of causing hardships to the common man through its policies. "Youth in India trusted Prime Minister Narendra Modi. In his every speech, he (PM) said he will give jobs to two crore youth but only four lakh people have got jobs, rest are still unemployed," Gandhi said. He compared the status of employment with China which gives jobs to 50,000 people in 24 hours.

Criticising the government for demonetisation and Goods and Services Tax (GST), Gandhi said that the government policies have impacted several businesses. "The government seems to have forgotten that most of Micro, Small and Medium Enterprises (SME) operate in cash. I went to Surat where traders told me that they have been the worst affected. They did not stop with demonetisation, they came up with GST. We wanted a single rate of GST. But you came up with multiple rates, you raided small traders and made life hell for them," Gandhi said.

Criticising Prime Minister Modi over his foreign policy, Gandhi mentioned the visit of Chinese President Xi Jinping to India. While President Jinping was here, Chinese soldiers entered India and a few days later they were in Doklam. He added that while Indian soldiers held the fort against the Chinese soldiers PM Modi let them down by not raising the issue with the Chinese side.

"PM Modi and Chinese President Xi Jinping were swinging in Gujarat after which Jinping put his soldiers in Doklam. Our soldiers defended the country. Then Prime Minister Modi went to China without any agenda and said Doklam will not be discussed. What our soldiers did by facing the Chinese, the PM could not do it... He (PM Modi) cheated our soldiers," Gandhi asserted.

Continuing his attack on Prime Minister Modi government, Gandhi said: "One of those people was given the Rafale contract where the gentleman benefited to the tune of Rs. 45,000 crores. The businessman had a debt of Rs 35,000 crores and had never built an aircraft in his life. PM Modi has not been truthful and that is a fact," Gandhi said.

"I looked at Prime Minister Narendra Modi in the eye, and he could not even face me. He is not a chowkidaar (a guard), he is bhaagidaar (indicating that he is involved in the Rafale 'scam')", Gandhi accused.

This Is Not Munna Bhai's 'Pappi Jhappi' Area: Harsimrat Badal On Rahul Gandhi's Hug To Modi In Lok Sabha