The Trump administration's decision came after a judge ordered that Acosta could continue reporting at the White House. 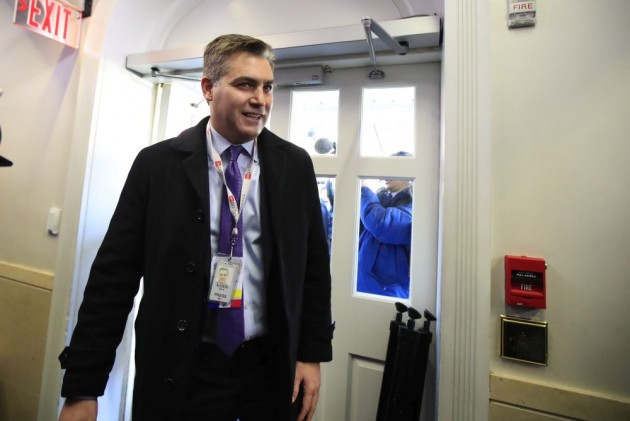 The White House has restored the full press credentials of CNN reporter Jim Acosta, less than two weeks after it temporarily suspended them following the journalist's altercation with President Donald Trump during a news conference.

The Trump administration's decision came after a judge ordered that Acosta could continue reporting at the White House.

Following the decision, CNN announced to withdraw its lawsuit against the White House.

Announcing its decision on Monday, the White House also issued "rules governing future press conferences". The new rules are for reporters covering the news conferences of either President Trump or senior administration officials.

"This afternoon we have notified Jim Acosta and CNN that his hard pass has been restored. We have also notified him of certain rules that will govern White House press conferences going forward," White House Press Secretary Sarah Sanders said.

Reacting to the decision restoring his pass, Acosta said he was looking forward to returning to the White House.

"Thanks to everybody for their support. As I said last Friday... let's get back to work," tweeted the Chief White House Correspondent of CNN.

Reporters from many news organisations had expressed support to the senior CNN correspondent because of the journalist's combative exchange with President Donald Trump at his post-midterms press conference.

Acosta's hard pass was temporarily suspended after his argument with Trump during a news conference on November 7.

CNN challenged the decision in the court. After a federal district court overruled the White House's order, Acosta's hard pass was temporarily restored on Friday.

As per the new White House guidelines, a reporter can ask a single question and permission for a follow up will be subject to the discretion of the individual holding the news conference.

Any violation of the rule might result in revocation of the press credentials, Sanders said, as she announced restoration of full access to Acosta.

Listing out the three new rules, Sanders said a journalist will ask a single question and then yield the floor to other journalists.

Secondly, at the discretion of the President or other White House official taking questions, a follow-up question or questions may be permitted.

Finally, "yielding the floor" includes, when applicable, physically surrendering the microphone to White House staff for use by the next questioner, Sanders said.

"Failure to abide by any of rules may result in suspension or revocation of the journalist's hard pass," she warned.

Shortly after the White House's decision, CNN announced to withdraw its lawsuit against the Trump administration.

"Today the White House fully restored Acosta's press pass. As a result, our lawsuit is no longer necessary. We look forward to continuing to cover the White House," CNN said.

The White House Correspondents Association (WHCA) welcomed the decision of the Trump administration and asserted that a free and independent news media played a vital role in the health of a republic.

"The White House Correspondents' Association had no role in crafting any procedures for future press conferences," he said.

"For as long as there have been White House press conferences, White House reporters have asked follow-up questions. We fully expect this tradition will continue. We will continue to make the case that a free and independent news media plays a vital role in the health of our republic," Knox said.

However, in her lengthy statement, Sanders noted that White House created the new rules with a degree of regret.

For years, members of the White House press corps have attended countless press events with the President and other officials without engaging in the behaviour Acosta displayed at the November 7 press conference, she said.

"We would have greatly preferred to continue hosting White House press conferences in reliance on a set of understood professional norms, and we believe the overwhelming majority of journalists covering the White House share that preference. But, given the position taken by CNN, we now feel obligated to replace previously shared practices with explicit rules," she said.

During the news conference, a White House intern tried to take the microphone from Acosta as he attempted to ask the president a follow-up question.

Trump called Acosta "a rude, terrible person" and the reporter was barred from entering the White House a day later.

Sanders said the White House was mindful that a more elaborate and comprehensive set of rules might need to be devised, including, for example, for a journalist conduct in the open (non-press room) areas inside and outside the White House and for Air Force One.

"At this time, however, we have decided not to frame such rules in the hope that professional journalistic norms will suffice to regulate conduct in those places. If unprofessional behaviour occurs in those settings, or if a court should decide that explicit rules are required to regulate conduct there, we will be forced to reconsider this decision," she said.

"The White House's interaction with the press is, and generally should be, subject to a natural give-and-take," Sanders said.

"President Trump believes strongly in the First Amendment, and a free press and is the most accessible President in modern history. It would be a great loss for all if, instead of relying on the professionalism of White House journalists, we were compelled to devise a lengthy and detailed code of conduct for White House events," she said.