The Air Force has hit an all-time low of 31 fighter squadrons vis-a-vis government authorized 42 squadrons even as India is at one of the worst geo-political hotspots of the world with two nuclear neighbors.

A critical issue requiring national attention is the depleting combat squadrons of the Indian Air Force (IAF). Unfortunately the subject has got hijacked by pre-election slugfest between the two major parties on the Rafale deal to the operational detriment of the IAF. At a recent seminar organized by the Center for Air Power Studies (CAPS), IAF Chief, Air Chief Marshal BS Dhanoa was very visibly concerned that IAF had hit an all time low of 31 fighter squadrons vis-a-vis government authorized 42 squadrons. He mentioned that India was at one of the worst geo-political hotspots of the world with two nuclear neighbors with both of whom we have serious boundary issues and have had wars. Both have formidable air assets and they could force India into a two-front war. It was imperative that IAF quickly rebuilt the squadron strength. The IAF also spelt out the road map ahead.

IAF had anticipated the unfolding scenario as early as 2001 and sought purchase of 126 Medium Multi-Role Combat Aircraft (MMRCA). Due to bureaucratic delays and political indecision, the process finally got started only in 2007. Meanwhile older MiG-21 squadrons which formed bulk of the IAF had to be retired gradually because of ageing and shortage of spares. Rafale was finally shortlist for purchase in 2012, but contract negotiations did not succeed both during UPA and NDA regimes, and as a dire measure it was decided to purchase only 36 aircraft off-the-shelf. Effectively 17 years went by without adequate results. Meanwhile MiG-23/27 squadrons also started phasing out. IAF is now down to 31 squadrons. Immediate fighter inductions are the Rafale and indigenous Defence Research and Development Organization (DRDO) designed and Hindustan Aeronautics Ltd (HAL) built Light Combat aircraft (LCA) 'Tejas'. IAF which had already committed for nearly 270 Sukhoi SU-30 MKI will now have to acquire a few more. Also IAF had no choice but to upgrade existing fleets of Jaguar, Mirage-2000 and MiG-29 aircraft and extend their life. 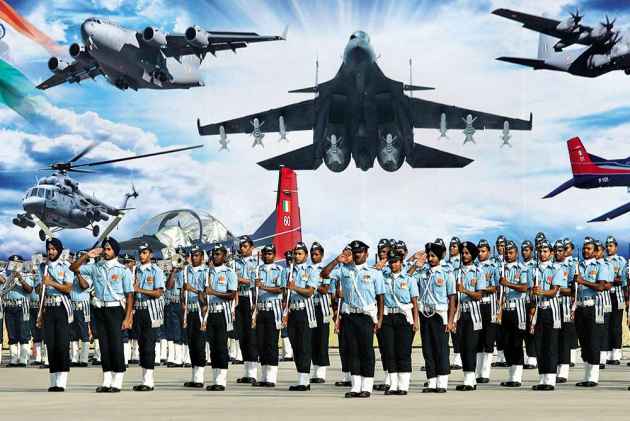 The regional air combat balance has now tilted considerably towards the adversaries. IAF today has around 625 fighter aircraft, Chinese Air Force has 1700 aircraft, of which around 800 are of 4th Generation plus. In the long term, China will have 80 combat squadrons of modern aircraft. Pakistan Air Force (PAF) has around 400 aircraft. IAF once enjoyed 3:1 advantage over PAF which has now come down to below 1.5:1. Pakistan is also keeping India engaged in low intensity warfare diverting manpower and scarce defence funds. Chinese are developing their own fifth-generation stealth fighters. Cash surplus China's defence budget is nearly four times India's and their defence R&D budget at US $ 28 billion is more than half of India's total defence budget. As China pulls ahead, India must quickly reassess and act.

IAF formed its first Tejas squadron on July 1, 2016 with just two squadrons to give a shot in the arm to the indigenous effort. As on date, only nine aircraft have been delivered. IAF has already ordered 40 LCA Mk1. It has further committed for 83 upgraded models called the LCA Mk 1A. The Air Chief has announced that IAF would induct 12 squadrons of LCA Mk II which will be ready to fly by 2025. One day nearly one-fourth of IAF will comprise of this locally built modern fighter aircraft. Since LCA will be a major mainstay of the service, there is an urgent need to complete the pending development milestones and to beef up production. Presently, the single aircraft assembly line at Bengaluru complex of HAL has a max production capacity of 8 aircraft. A second assembly line has to be commissioned urgently to increase annual production to 16.  Indian Ministry of defence (MoD) is also mooting the idea of supporting setting up one additional assembly line run by private sector with HAL support. Only a production rate of around 24 aircraft a year can arrest the declining numbers for IAF.

LCA is not even a fourth generation aircraft in capability and class. Their inductions will certainly help the depleting numbers, but IAF needs to acquire more 4th generation plus aircraft to be able to counter especially the northern adversary which is in the process of inducting home-grown fifth generation aircraft. IAF has therefore initiated the process for acquiring 114 modern fighters which will be of the operational class as required. Meanwhile DRDO has already begun developing the Advanced Medium Combat aircraft (AMCA) which will be fifth generation stealth aircraft. This aircraft will make its first flight around 2030 and may induct into IAF by 2035.

The immediate way forward is to boost LCA production and hasten the selection and procurement process for the 114 fighter aircraft. The 2018-19 defence budget is Rs 2,79,305 crore (US$ 39 billion) which is 1.57 percent of the GDP, and with rising dollar will get us less for the buck. Bulk of the Capital budget for new acquisitions at Rs 93,982 crore has to be earmarked for committed liabilities i.e. pending payments for already ordered defence equipment. The modernization gap would require additional funds. Analysts have suggested that the defence budget be raised to around 2.5 percent of GDP. India's burgeoning social sector requirements may not allow such an increase. The choices are tough but they have to be made. US Secretary of State Mike Pompeo recently said "We must protect the very things that make America so special - most certainly including civil liberties. But we cannot do so without strong national security and a thoughtful informed discourse".

(The writer is a test pilot and retired Air Marshal)