Advertisement
Home Society
WHAT IF...

What If There Were No Trucks At All? 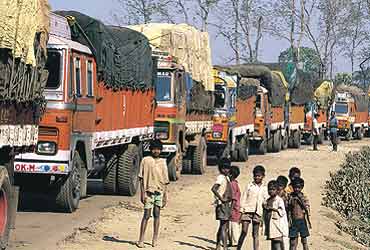 For the vast majority, the British seem to have withheld the benefits of the internal combustion engine. An inferior by-product of refined petroleum - kerosene -- fuelled the poor peasant’s dhebri-lamp or the more substantial lalten; petrol-driven trucks were far from ubiquitous on Nehru-era highways, buses for transporting ‘English medium’ kids in towns, and some rustic passengers were more common. The bulk of the vulcanized tyres plying the countryside, however, were attached to bullock carts: the modified garis dutifully carrying the appellation ‘Dunlop’ after that famous rubber MNC.

The railways were limited to transporting bulky and non-perishable commodities. Long cart hours were lost bringing in rural goods to the numerous small stations and taking delivery of the ‘billeted’ items (bilti chhurana in indigenous parlance) from railway godowns. Raw cotton and textiles, wheat, rice and dals, gur and refined sugar, cured hides and leather goods, salt and other condiments rode the trains and the carts. But only ‘dried’ nuts and resins among the fruits, and long-lasting tubers and roots (potato, carrots, ginger, onion and garlic) from the vegetable kingdom reached unspoilt by rail. Lipton tea, Binaca, Colgate and Bandar-chhaap dant-manjan for teeth and gums, 501 soap bars and Lux, Rexona and Tata shampoo in glass bottles for toiletries, and of course lattha, markin and the newly fabricated sweaty terylene -- all these could be loaded on to rail for the first generation Independent Indians. For the non-metropolitans, you ate and drank what could be literally carted from the surrounding countryside.

And then the trucks - first the OK TATA variety, subsequently the diesel Benz - hit the teenage nation in the 1960s, and we haven’t looked back even to bid goodbye to the old-style, cart-dependent consumers that most Indians were till then. The railways may at times seem like an imported idea, witness the exclusive railway colonies and the posh bathroom fittings in some of the fancier stations, but the trucks, the way they are loaded and hog the road and honk, appear quintessentially Bharatiya, almost natural: life without them, to paraphrase the English comedian R. Atkinson, would be like a broken pencil: pointless.

Truck transport brought the juicier, perishable and mouthwatering pleasures of life; they also introduced us pushpanjali-offering Indians to the culture of cut-flowers. The drawing room rather than the puja-corner became the resting place for exotic, ungarlanded flowers; the haar (usually of marigold) for netas was replaced by the now standard gladioli-rajnigandha bouquet which could be brought home, and had a longer vase-life; short strings of the heady champa-chameli continue to be bought by South Kolkata ladies (I suspect) at Gariahat. For the rest, it is the trucking of cut flowers, untouched by the hands of the traditional malis that determines what we decorate our homes with, or pick up in a hurry from the kerb-side florist as a gesture -- for what is impermanent can’t be a gift. No trucks, no horticultural farms, no mushrooming of small-time ‘florists’, even in my native east UP nimbly wielding their scissors, foils, tapes and ribbons to create ‘boo-kets’ for the mufassil cosmopolitans.

No trucks would have meant no expansion in the range of our cuisine, both satvik and tamsik: mushrooms, the star attraction of vegetarian weddings would have remained inedible as poisonous and impure (kukur-mutta being its expressive name over much of North India), the pizza-walas would have had to launch a major drive to get over popular prejudice, and its cultivation would have been confined, as it was till the late ‘sixties, to Maharaja Patiala and partners’ mushroom farms in Chail opposite the Shimla hills. The shuddh Vaishnav bhojnalayas of Prayag and Kashi would have been stuck in the pre-truck alu-parwal food-warp.

Chicken and egg would have remained local products, available from domestic darbas in the lower middle class Muslim quarters of towns and cities: capitalist-run hatcheries would have found it impossible to pack their battery-chickens into the rail-goods wagons, and butter chicken, would have remained confined to Ludhiana, to the relief of the partisans of Awadhi, Mughlai and Hyderabadi cuisine. The National Egg Council might have had to diversify into raising ganth-gobhi or perhaps turnips, both low on the scale of proteins and taste. The Farm- to-Wholesaler trucks which now carry millions of eggs, even to rural tea-stalls, would not have muscled past others loaded with LPG cylinders, and omelettes and boiled eggs would not have been hawked by the roadside on fruit-and peanut-selling push carts, providing easy nourishment to those barred from breaking eggs in domestic kitchens.

The bigger cities would have been deprived of both milk and water which, nicely separated in respective tankers, provide the life-line to the cooped up urbanites of HIG, MIG and LIG flats, and to the shanty colonies of migrants, without whom present-day middle-class domesticity appears unimaginable. We may smirk at the horn-blaring trucker who habitually violates our roads, but he is doing all this in a good cause-consumer satisfaction.