Home  »  Website  »  Features  »  What Gives You The Opportunity To Start Over, To Begin Afresh? A Good Haircut
Blog

What Gives You The Opportunity To Start Over, To Begin Afresh? A Good Haircut

For me, a haircut has always been one of life's opportunities to start over, to begin afresh, to out with the old and in the new and all that. 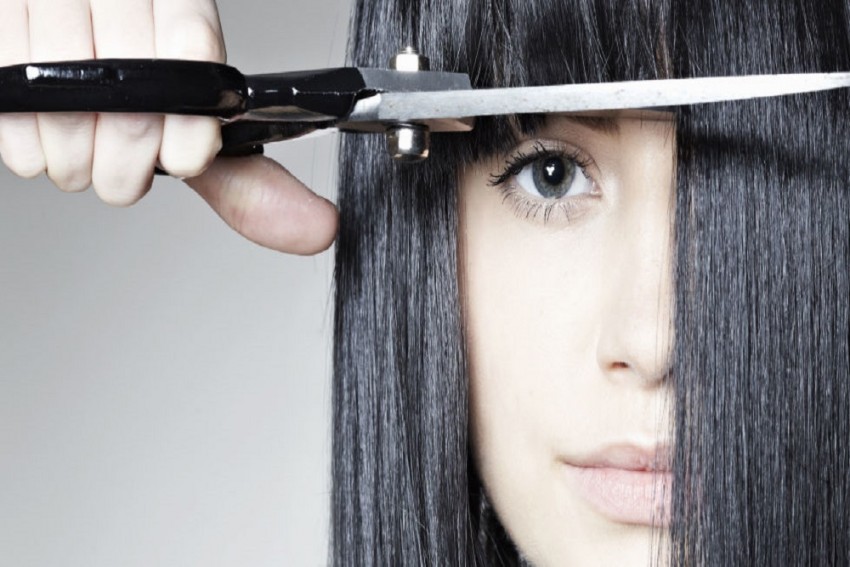 Representative image
Vatsala Mamgain February 24, 2017 00:00 IST What Gives You The Opportunity To Start Over, To Begin Afresh? A Good Haircut 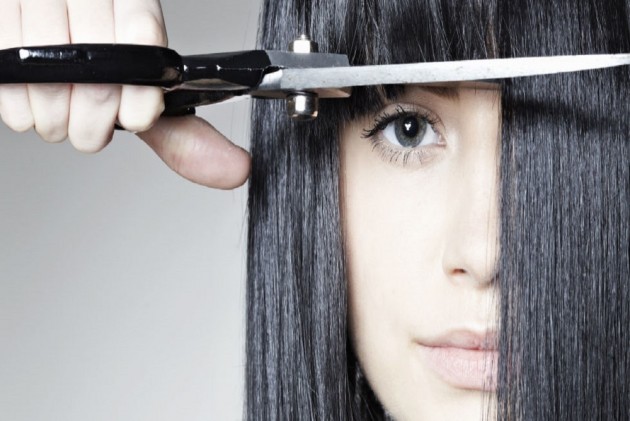 I've had more haircuts than most women I know. I have hair which is normal hair till it reaches an inch below my ears whereupon it becomes another animal. A flat, dull mane that parts itself from the dead centre of my head, and hangs in twin lank curtains around my face, giving me a startling resemblance to a tabalchi from UP. So my racing to get my hair cut after every three weeks has been the only way in which I can walk down the street and not have people press velvet waistcoats and topis and paans upon me to complete the look.

I've never ever had long hair. My mother spent so much time when my sisters were little, curling their hair in elaborate little cherub curls that she used up all her lifetime stores of hair related patience. So by the time I came along, short hair cropped as close to the skull as possible without exposing actual brain tissue was the law she laid down. Wherever my father was posted in his peripatetic Army life, my sisters and I would be shovelled off to a hairdresser chosen by my mother.

In a few places there was AN John - who was clearly the Jacques Dessange of the mofussil town parlour set; swisher and posher than the Chinese parlours that Mummy favoured and we generally frequented. Parlours that whether they were in Kota or Shillong, Lucknow or Devlali, had as their unifying characteristics the fact that at they boasted at least one pretty Chinese girl called Jenny, had sweet squishy Chinese children emerging from every crevice in the place including the hairdryer drawers and some extremely pungent yet appetising smells always arose, miasma like, from right behind the shop.

I loved getting my hair cut. I loved the chatty informality of whichever Jenny happened to be cutting my hair, and how she kept up a rapid fire exchange with the other girls in Chinese while smacking a few of the hairdryer drawer children efficiently from time to time. The only time she would really look at me was when the haircut was over and she showed me the back of my hair in a second mirror and said "You like?"

I may not always have liked the particular haircut, but over the years I realised I loved the concept of getting a haircut. Surrendering my self into the comforting embrace of the hairdressing cape, escaping into the amniotic comfort of a magazine and then, looking up in time to see a new edited me emerge was an invariably comforting ritual. For me, a haircut has always been one of life's opportunities to start over, to begin afresh, to out with the old and in the new and all that. I know there are those who do that with diets and new noses and push up bras, but me - I've always done it with haircuts. It's cheaper than surgery and easier than a diet and you get to read trashy magazines you would never buy for yourself, so it's a no brainer any which way.

At some stage my sisters started growing their hair. But while I always begged them to change their hair styles drastically because they could do so many more things with their long hair than I could with my short tresses, they were strangely reluctant to. Once they found a look they felt suited them, they tended to stick to it for long periods. Part of this was apparently the whole fear of the hairdresser cutting off way more than they wanted, which seems to be a fairly widespread and well grounded fear. But me, I tried everything - variations on all the short styles known to hairdresserkind. So my "boy cut" graduated to a bob, was mixed up with a short pixie, a stacked bob with layers, a blunt, an asymmetrical, a buzz cut, a katora cut from the unit barber, several sad perms that made me look like a demented poodle, and once, memorably a shag - a haircut which was cropped on top and had straggly wisps at the back - a popular boy band look in the 80s and 90s, a haircut that made me look exactly like a bonsai Sanjay Dutt.

But by and large, I have had decent haircut karma - I always managed to find wonderful hairdressers to whom I could entrust my appearance and who mostly got it right. One time, I decided to try this salon right next to my place ("how bad can it be?") and did my usual let me disappear into the amniotic sac while you cut my hair routine with the hairdresser. He was a sweet and nervous Gujarati boy, and I gathered that he was reluctant to cut my hair because in his experience women always came in asking for haircuts but got mad and began yelling when more than a micron of hair was chopped off. Since mine was already short to begin with, he was less than keen to get started. I assured him he would hear no yelling from me and asked him to cut away. "Bindaas kaatna" may have been my technical advice to him before I drifted away to lala Land.

When I emerged from my reverie, I found to my horror that there was a gaunt hairless concentration camp survivor staring back at me from the mirror. I don't know exactly what the nervous boy had done and the technical skills required to achieve this feat, but he had managed to make my hair look like the skin on a mangy dog. But given that he had followed my technical instructions of "Bindass kaatna" to a T, I could hardly fault him. Eventually I asked him to shave my hair off with a number 1 blade.

Walking back from the salon to my home next door was unnerving- people rolled down their car windows to stare and stare and stare. (This was in the days when Indians hadn't yet achieved the world sophistication and exquisite manners for which we are now famous). One guy at a red light actually poked his head out of his car and began to yell something at me as I walked past. To say I was infuriated would be fair, I had gone into a salon to have a haircut and had emerged totally shaven and his gratuitous and ghoulish interest in my appearance left me enraged. So I whirled around and began to yell right back at him. I suggested his own looks left a great deal to be desired and that even I, with an unfortunate haircut, looked wonderful compared to him. When the light changed, he drove off looking dazed, with me still yelling and shaking a fist at him.

A few minutes later, my phone began to ring madly. It was my friend calling to ask if I had shaved my head. Her brother had seen me walking home looking shaken and shorn and had rolled down his window to ask if all were well. He reported I had refused to recognise him and hurled so much abuse at him that he was left with no option to believe I had joined a cult and lost my mind. Or lost my mind and joined a cult. Either which way I was wandering the streets of Bombay in possession neither of my mind nor my hair and he wondered if she would like to shed some light on the subject.

That was of course quite the hairiest haircut I ever had. I've had many many haircuts since. none with aesthetic or psychological results quite as dire. I've also tracked my children's haircuts, my friends haircuts, the prices of haircuts, how no one seems to go to Chinese hairdressers anymore for haircuts and how salons have replaced parlours as the place one goes to for haircuts. I am full of wit and wisdom about haircuts, no matter how they turn out, who they are given by and who gets them. So. Since you're dying to know here are the lessons I have learnt along the way - the entire unabridged Tao of haircuts - yours for free.


1. A good haircut may be expensive but a good hairdresser is priceless.


2. Life is too short to have boring hair, so be fearless. Experiment, be irreverent, try everything once - you own your hair, your hair doesn't own you. But never ever ever ask your hairdresser for a shag, unless you actually want to shag your hairdresser.


3. "It will settle down after a few washes" is hairdresser speak for "Holy shit, I had no idea hair could do that..."

4. Those of you with long hair, "Something totally different but the exact same length" is not a haircut - it's a miracle.

5. Having said that - hairdressers went to the molecular opposite of the measurement school that fishermen did. So a trim means half your hair will be off in a nano second. In that context, "bindaas kaatna" is the nuclear code of haircuts, give it to your hairdresser knowing there are likely to be some fairly radioactive consequences.


4. Bad haircuts have good crush karma. Getting a bad haircut is practically a guarantee from the universe that all the people you have ever had a crush on in your life, or people you have dumped cruelly or who have dumped you cruelly will travel miles and miles sometimes from other continents just to bump into you unexpectedly.

6. When hairdressers do their thing, please let them do their thing. Forget the haircut, it is never a wise policy to mess with anyone with access to sharp instruments and your neck at the same time.

6. Do not spend all your money on cheap rum and then ask your roommate to cut your hair ("whatever you do will look better than this.") Especially if said roommate has also imbibed similar quantities of cheap rum. Because it's not true, whatever they do will most definitely not look better than this, no matter how dire the "this" in question is .

7. Only Parisian models look like Parisian models with shaved hair. The rest of us look like Azerbaijani peasants on starvation rations. Just saying. (As an aside - Do not wear shorts and a grungy Tshirt and answer the door with a shaved head. "Saab ko bulao" is likely to be the no 1 greeting anyone at the other side of the door is likely to extend to you.)


This is it - all my haircut wisdom distilled into one pithy post. But if this treasure trove of wisdom is too much to wrap your brain around, all you need to do is just remember my No 1 insight.

That real beauty comes from the inside.

And if you choose right, sometimes that inside is the inside of the hair salon.

Jahangirpuri: Where Waste And A Dumpyard Nurture 'Little Dreams'