Their turnaround in one-day form has been stunning and credit must go where it is due. It would appear that under the new team management and fresh young talent, a cohesive, powerful unit is in the making. 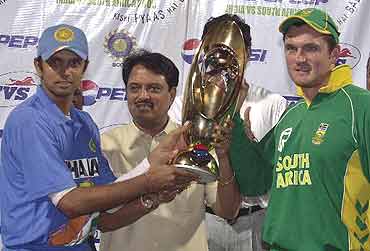 In the end it was a fair, even result. South Africa went away feeling good that they adjusted quickly to the conditions and came within a whisker of winning the first-ever series in India.

The hosts, on their part, showed resilience in keeping up with the punishing schedule of recent weeks and recovering the lost ground. Both have made progress and are formidable one-day units. They are the teams in form.

The fifth one-dayer was not an easy game. Indian batsmen might have been denied the dew factor as it did not hamper the rival bowlers but there is little denying the wicket upfront in the afternoon suited their slow bowlers to the hilt.

Once South Africa lost two early wickets to Irfan Pathan and the visitors went into a rebuilding mode, a big score was always out of question. It could be argued that South Africa shifted gears too late as Jacques Kallis played according to his norm. But the Indian spinners deserve wholesome praise for the manner in which they bowled. The wicket too was their ally.

As an aside, I must mention I have been surprised that no 300-plus scores were witnessed in the series. That has not been my experience of Indian wickets in the past. One reason of course was that the wickets were going around a bit in this series and two, the bowling of both sides was excellent.

When the Indians chased, I had the feeling that Sachin Tendulkar would close the game on his own. But then he was out to a catch which is the one of the best I have ever seen on a cricket field.

But Tendulkar's dismissal did not matter to them as Rahul Dravid batted as is his wont. There was no mistaking his demeanour -- he was hungry and determined and not unlike him as I know him.

The South African seamers bowled excellently but the Indians kept coming up with better answers. I just wish the South Africans had held on to their slips a little longer.

It would be unfair not to mention Yuvraj Singh for he has been very impressive. He has got great pair of hands and I really liked the way he played under pressure in the series.

In the past he might have taken on too much but the new Yuvraj seems nicely tempered between aggression and caution. His footwork and shot selection has improved enormously. He has a star presence in one-day cricket where he makes critical contribution in the field and with bat, not to forget his spin bowling which could be extremely handy for the Indians in the 2007 World Cup.

Both sides now have Test issues to attend to next month. South Africa head for Australia where the Tests would bring a different flavour. India too shift to the longer format after making impressive strides in one-day cricket.

The turnaround in their one-day form has been stunning and credit must go where it is due. It would appear that under the new team management and fresh young talent, a cohesive, powerful unit is in the making.

South Africa, too, are under a hungry, young leader and has players who can perform multi-functions. It's fielding is probably the best in the world and if they could perk up their batting a notch or two higher, it would only help them grow further. As it is, they are making the world take notice of their progress.

There is no reason for the Indians to feel despondent on Tendulkar for the little great man seems only an innings away from good form. Virender Sehwag too would soon chalk up a big score given the way he has been middling the ball and hitting the pickets. If you count the rest of the batters, the Gambhirs and Dravids, Yuvrajs and Kaifs, it has a meaty look to it. And we have not still come to discussing the Dhonis and Pathans!

Well done India, keep it up.