Whether or not the BJP has outgrown the pejorative epithet of 'party of petty shopkeepers and traders', it is interesting to take a look at their online bookshop. 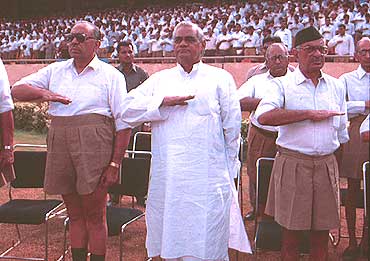 outlookindia.com
-0001-11-30T00:00:00+05:53
The BJP's once proud boast to be a political party with a difference has gradually collapsed under the weight of scandals like the Tehelka expose, but the party does have one, albeit small, claim to uniqueness.

Unlike other political parties, the BJP runs an online book shop, which offers a variety of books espousing its viewpoint at attractive discount prices.  As far as I have been able to determine, this is a first in India.  There is the caveat that the Irish political party Sinn Fein has an online bookshop, and the Croydon branch of the British Labour Party has signed up to be a member of the Amazon Affiliate Programme, allowing it to collect 15% of the cut on books sold through its site).

Perhaps, if its enemies and former friends are to be believed, mercantilism is in the BJP's blood.  Kalyan Singh, the former BJP chief minister of Uttar Pradesh, and 'hero' of the Babri demolition, has taken to repeating the taunt that the BJP is "basically a party of Brahmins and Banias".

The party seems to know how to offer an attractive bargain.  The most expensive item in the store, a three volume work by Shri Atal Behari Vajpayee is on offer at a huge 25% discount (Rs 1500/- marked down from Rs 2000/-).  But this storehouse of knowledge tells more about the BJP than just its business sense.

That Bible of the RSS, the "Bunch of Thoughts" by "Guruji" M.S. Golwalkar, the second Sar Sanghachalak (supreme leader) of the RSS, is on sale (though not at a discount).  Funnily enough, though, Golwalkar's 1939 work, "We, or Our Nationhood Defined", is missing.

Both "Bunch of Thoughts" and "We" are infamous for their racist views. In "Bunch of Thoughts", the Sar Sanghachalak expounds on his opinion that Muslims and Christians are unpatriotic and lack "love and devotion for the nation".  His hatred ranges farther afield.  He describes the Chinese people in these terms: "They eat rats, pigs, dogs, serpents, cockroaches, and everything.  Such men cannot be expected to have human qualities."

The missing "We" is particularly juicy: in it the author lavishes praise on the atrocious Nazi campaign that had gone on in Germany, for most of the 1930s, against Jews and Gypsies.  "There are only two courses open to these foreign elements," Golwalkar explained, "either to merge themselves in the national race and adopt its culture or to live at its mercy so long as the national race may allow them to do so and quit the country at the sweet will of the national race".  He added that this was "a good lesson for us in Hindusthan to learn and profit by".

The absence of "We" calls to mind a Rajya Sabha debate of last year, at the time of the Gujarat government's decision to allow government servants to be members of the RSS.  Kapil Sibal tried to read out a study quoting from "We", and was repeatedly heckled and shouted down by BJP members.  These worthies decided that since Sibal was not reading directly from "We", but rather from a book which quoted "We", he was not quoting authentic RSS sources.  "He is misleading the nation!" shouted the fervid BJP member T.N. Chaturvedi.

Perhaps "We" is missing to prevent anyone reading directly from it in Parliament, and thereby doing away with that silly objection...

There are several books on the BJP bookshop catalogue that deal, curiously enough, not with modern Indian politics, but rather with ancient Indian history. They treat the period of Indian history roughly between 3000 and 1000 B.C., i.e. between 5000 and 3000 years old.  These books are:

These books are about whether the Indo-Aryan languages (spoken today by almost two-thirds of all Indians) were brought to India some time probably during the second millennium B.C., as scholars of ancient India believe, or developed indigenously, as authors like Sethna, Talageri, Rajaram and other Hindu nationalists believe.

The BJP has adopted the "Aryan" question as its own, and the appearance of this list in their book shop is one of the many actions the party has taken to place its stamp of approval on the particular (and generally rejected by scholars) interpretation of history contained therein.

Shrikant Talageri, as near as I have been able to find out, is or was a bank clerk.  N.S. Rajaram is a vitriolic Hindu nationalist who claims to have worked for Lockheed in the United States before returning to India, apparently to devote himself full-time to writing Hindu nationalist works.

(Rajaram was recently the subject of embarassing revelations in the magazines Frontline and Outlook -- A Bushy Tail: The Piltdown Horse -- when Michael Witzel, a Harvard professor, and Steve Farmer, a comparative historian, demonstrated that a recent book of Rajaram's had deliberately falsified evidence to bolster his arguments.)

What Rajaram, Talageri, Sethna (and friends and co-authors of theirs -- people like David Frawley, a New Age herbal healer; Subhash Kak, an electrical engineer; and Georg Feuerstein, author of "Yoga for Dummies" -- share in common, is a vitriolic hatred of majority opinions about ancient Indian history in the scholarly community, and a desire to replace it with a completely different view.

The motivation is transparent.  They wish to erase the scholarly opinion that the north Indian languages (of which the oldest is the language of the Vedas) came to India as a transplant from the north-west.  By doing so, they can then denounce Muslims and Christians as followers of a foreign religion, without having the same charge justifiably levelled back at them.

This is all politically understandable, but none the less reprehensible.  For a political party to support one side of an academic controversy -- and that the one without academic support -- recalls again the bizarre times of the Nazi or Soviet regimes, when the Theory of Relativity was dismissed as an excess of "Jewish science", and a generation of Russian geneticists were destroyed by the bizarre ascendancy of the neo-Lamarckian T.D. Lysenko.

Imagine for one moment that the Republican Party were distributing pamphlets attacking the theory that the ancestors of native Americans first crossed the land bridge over what are now the Bering Straits during the Pleistocene era.  Or that the Labour Party in the UK were selling books vilifying historians for suggesting that the Beaker folk did not build the Long Barrows back in 2500 B.C.

This is just as strange.  It points to a lack of maturity in the way Indian society views academia.  A useful mirror to understand this is, I suggest, the evolution-creation debate which had its last great flare-up in United States in the Scopes Trial of 1925.

Since well before the Wilberforce-Huxley debates of 1860, opinion in the West had been swinging away from the Biblical literalist view that the world was created on October 23, 4004 B.C., at nine o'clock in the morning.  While scientists accepted the theory of evolution relatively quickly -- because they understood it -- society as a whole took much longer to do so because they had yet to transfer their trust from religion, as the arbiter of their philosophy and cosmology, to science.

Nowadays, for the most part completely, the tribal totem poles have been taken away from the West's priests and mystics, and handed to the scientists and other academic professionals.  This may not be ideal from the complex perspectives of social organisation, but it does recognise the principle that for any sufficiently complex subject, professionals who have spent their careers understanding the subject's minutiae and complexities are, as a group, more to be trusted to understand it than any other group who have not done that.

In India, perhaps because academia has never really had the funding (we are after all a poor country) that could enable it to develop the level of professionalism and public respect academia has in the West, the idea that all academic scholars of ancient India -- both Indians and Westerners -- are either deluded or deliberately falsifying history -- and that this can be set right by the government applying funding and pressure judiciously in the right areas, appears credible.

This is crazy, lunatic, and wonky, but that's the way things are.  The remedy may not be purely within an Indian context.  Fortunately for the study of Indian history, the BJP government's campaign to team up with amateur cranks and vilify academic historians only really works inside India, where the government has vast powers to manipulate funding, appointments and publications.

But outside India, in the universities of the West, where scholars prove their academic credentials in the court of peer review are relatively free of such intereference, the banias lack such powers.

While the vilification campaign that operates at full throttle in India against historians like Romila Thapar has also gone into operation against Michael Witzel of Harvard after he exposed Rajaram's chicanery, it has no effect against a scholar whose publications over the years in various aspects of Sanskrit and the study of ancient India are well read and respected among his peers.  The same can be said (to take only a few examples) of other scholars like Deshpande at Michigan, Hock at Chicago, Insler at Yale, and Rocher and Cardona at the University of Pennsylvania.

Long after the politicians have stopped shouting about ancient history and found something else to get exercised about, it will be these scholars, and people like them, who will contribute and shape the world's understanding of ancient Indian history.  Not Murli Manohar Joshi, not Sushma Swaraj, not Navaratna Rajaram, and not any other puffed-up self-important pygmy that thinks their ethno-nationalist and political views can trump the sober process of scholarship within the tradition of the academy.