'We Love This Country'

Full and translated text of JNUSU president Kanahiya Kumar's 'seditious' speech for which he was arrested. 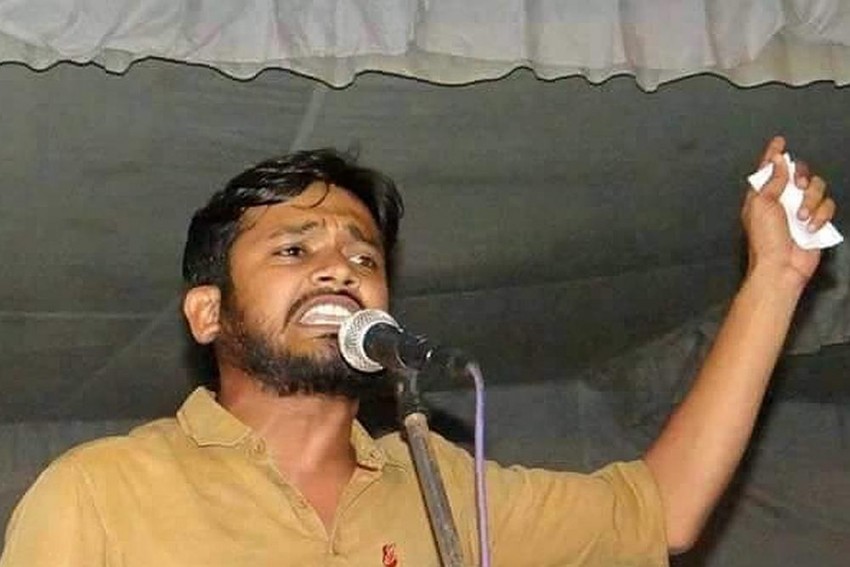 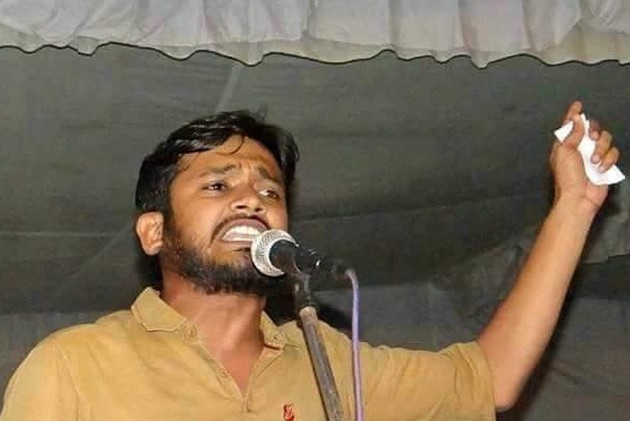 But it's shameful and sad that the ABVP, in association with their media friends, is running an orchestrated campaign.

Our hostel has not been built for the past four years, there is no Wi-fi. BHEL gave us one bus but the administration has no money for oil. And ABVP people stand like Dev Anand claiming that they will get hostels built, they will get Wi-fi and they will get fellowships.

They say that five fingers are not equal. They advocate that women should emulate Sita and give agnipariksha. There is democracy in this country, and democracy gives equal rights to all - be it a student, a worker, the poor or the rich, Ambani or Adani. And when we talk about equal rights of women, they accuse us of destroying Indian culture.

We want to destroy the culture of exploitation, the culture of caste, the culture of Manuwad and Brahminism. Till now, the definition of culture has not been resolved. They have a problem when people of this country talk about democracy, when they give blue salute along with red salute, when people talk about Ambedkar along with Marx, when people talk about Asfaqulla Khan (the freedom fighter). They can't tolerate. It is their conspiracy. They were British stooges. I dare them to file a defamation case against me. I say that the RSS's history is of siding with the British. These traitors today are distributing certificates of nationalism.

Check my mobile phone, friends. Dirty abuses are being hurled at my mother and sister. Which Mother India are you talking about? If my mother is not part of your Mother India, your concept of Mother India is not acceptable to me.

They are enacting the drama of celebrating Ambedkar's 125th birth anniversary. If they have courage, they should raise the issues Ambedkar raised. Caste system is one of the biggest problems in this country. Talk about caste system, bring reservation in every sector, bring reservation in the private sector. Raise these questions, then I will believe that you have faith in this country.

This nation had never been yours and will never be yours. A nation is made by its people and if there is no place for hungry and poor people in your idea of the nation, then it is no nation.

Some media friends told me that JNU runs on taxpayers' money, on subsidy. Yes, it is right that JNU runs on subsidy. But I want to raise the question: what are universities for? Universities are there for critical analysis of the society's collective conscience. Critical analysis should be promoted. If universities fail in their duty, there would be no nation. If people are not part of a nation, it will turn into a grazing ground for the rich, for exploitation and looting.

But we want to tell these Sanghis - "shame on your government". We challenge the central government - we will not allow in JNU whatever it did in the case of Rohith. Rohith will not lose his life here. We will not forget Rohith's sacrifice. We will stand for freedom of expression.

We have identified those who are against humanity. This is the biggest issue before us today. We have identified that face of casteism, the face of Manuwad, the face of the nexus between Brahminism and capitalism. And we have to expose these faces. We have to usher in real freedom, and that freedom will come through the Constitution, through Parliament. And we will achieve it.

One last question before I end my speech. Who is Kasab? Who is Afzal Guru? Who are these people, who are in a state to wrap bombs around their body and kill? If these questions are not raised in universities, the existence of universities becomes pointless. If we don't define justice, if we don't define violence and how we see violence? Violence is not only about killing somebody with a gun. There is violence when the JNU administration denies the constitutional rights guaranteed to Dalits. This is institutional violence.

They talk about justice. Who will decide what justice is? Brahminism did not allow Dalits to enter temples. The British did not allow dogs and Indians to enter restaurants. That was justice then. We challenged that justice and today we challenge the justice of the ABVP and the RSS because their justice does not accommodate justice for us. If their justice doesn't accommodate justice for us, we will not accept their justice and this freedom. We will accept this freedom when every person gets his constitutional right. We will accept justice when there is equal rights for all.

Friends, the situation is very serious. Under no circumstances does the JNUSU (the JNU students' union) support any violence, any terrorist, any terror incident and any anti-India activity. I want to reiterate that the JNUSU strongly condemns slogans of "Pakistan zindabad" raised by some unidentified people.

We want to ask the JNU administration for whom, with whom and on what basis it works. It is now clear that the JNU administration first gives permission and then withdraws it on receiving a call from Nagpur. This thing of first giving permission and then withdrawing, it has intensified. First, they will announce fellowship and then tell that it has been withdrawn. This is the RSS and ABVP pattern with which they want to run this country.

At the same time, understand the truth of these (ABVP) people. Don't hate them. I feel sad for them. They are jumping today because they feel that the way they got Gajendra Chauhan (in the FTII), they would get people like him in every institution. They feel that with people like Chauhan everywhere, they would get jobs. Once they get jobs, they will forget nation worship and Bharat Mata. What to tell of the Tricolour, which they have never respected? They will also forget the saffron flag.

The day the person selling bananas turns and tells them that you are the real looters, they will term the poor fellow anti-national. Nation worship begins and ends with wealth and facilities. I know a number of ABVP people and I ask them whether the fervour of nationalism moves them? They tell me: "What to do, brother, this government is for five years and two years are already over. Three years' talktime is left and whatever has to be done, should be done in this period."

But I ask them what will happen if, tomorrow, one of their own members, who is going around in trains checking for beef, holds them by the collar and accuses them of being anti-national since they are from JNU? They could be lynched. I ask them whether they realise this danger?

They tell me that they realise this danger and so are opposing #JNUShutdown (a Twitter hashtag). First, they build an atmosphere against JNU and, then, oppose it when they realise that ultimately they have to live in JNU only.

This is why I want to tell all JNU-ites that elections are coming in March. The ABVP people will seek your votes with the "Om" flag. Ask them: "We are jihadis, we are terrorists, we are anti-nationals and by taking our votes, will they also become anti-national?" Do ask them these questions. I know when you ask them these questions, they will tell you, "not you but a few people are anti-nationals". Then ask them, "why did they not tell this in the media then"? Ask them why their vice-chancellor and registrar too did not tell then?

They will never understand this. But the people, who have gathered here on short notice, understand the issue. They will go around the campus and tell the students that the ABVP is not only breaking this country but also JNU and we will not allow this to happen.

Long live JNU. JNU will continue to actively participate in all democratic struggles taking place across the country, continue to strengthen the voice of democracy, the voice of freedom and freedom of expression. We will struggle and win and defeat the traitors of this country. With these words, I thank you all and appeal for unity.

The original speech was in Hindustani and has been translated into English by J.P. Yadav. This translation was first published in the Telegraph, Calcutta.

'When I Covered My Genitals, They Said Don't Be Shy'