While trying to shield the ball from fellow Argentine Franco Vazquez in the 16th minute, Messi hit the turf with his arm outstretched. 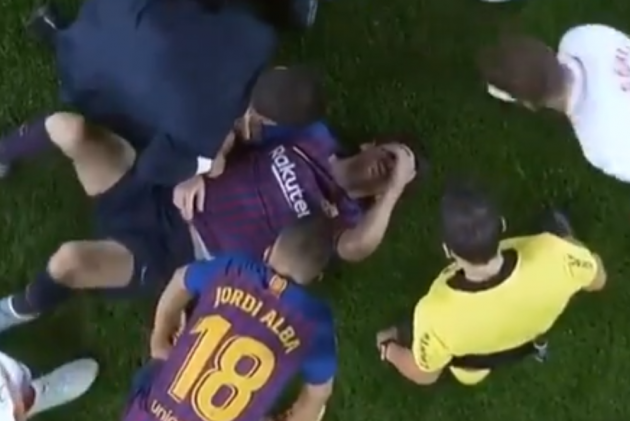 Barcelona superstar Lionel Messi was forced off the field with an arm injury minutes after scoring Catalans' second goal against Sevilla in a La Liga match at Camp Nou early Sunday morning.

While trying to shield the ball from fellow Argentine Franco Vazquez in the 16th minute, Messi hit the turf with his arm outstretched.

In the fall, his right elbow looked to bend.

#Messi replaced after a nasty fall...ðÂÂÂÂÂÂ±

Sevilla are Messi's favourite punching bags. He had scored 25 goals, same as Cristiano Ronaldo – a record for the most goals by a player against an opponent in La Liga.

He is likely to miss Barca's Champions League match against Inter Milan on Wednesday and also next weekend's El Clasico with Real Madrid.

After a brief medical attention in the centre, the 31-year-old was helped off the pitch by two Barca physios in the 17th minute. His place was taken by Ousmane Dembele.

In the 12th minute, he doubled Barca's lead with a magnificent finish from the edge of the box. Philippe Coutinho scored the first goal in the second minute from a Messi set-up.

Watch both the goals here:

No prizes for guessing who grabbed it. His 25th against Sevilla. Barca heading top.
@FCBarcelona 2-0 @SevillaFC_ENG pic.twitter.com/ze0CfoFIHs

Barcelona need a win to reclaim the top spot in the league.