The grotesque incongruity of Mamata Banerjee's recent political twists and turns apart, it's proving difficult for her to keep her dwindling flock together. 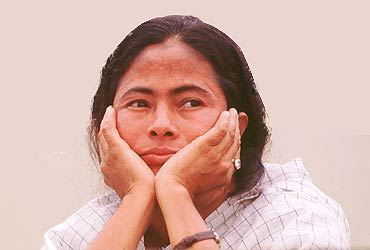 Trinamul Congress (TC) leader, Mamata Banerjee, the only Opposition leader in Bengal, is learning the hard way that staging a political comeback may be more difficult than she had bargained for.

Even after the January 10 bandh that her party supported and the jail bharo programmes she carried out later, there is no indication that her present support base is anywhere near what it was in 1998 or 1999.

In sharp contrast, her new bete noire, Chief Minister Buddhadeb Bhattacharya has consolidated his position, with new investments coming in and a gradual improvement in the work culture.

It appears that Ms Banerjee and her party have lost their credibility after the 2001 Assembly elections.

It is common knowledge that among major leaders, Ms Banerjee is prone to run her affairs with help and information provided by a few trusted journalist 'advisers'. Their 'advice' in the ticket distribution process prior to the 2001 elections resulted in an unmitigated disaster for Ms Banerjee.

For a while the TC remained dormant after the Sixth Left Front came to power. Ms Banerjee even offered to resign, which was turned down as expected, by her followers. After some inner party talks and regrouping (read the sidelining of Ajit Panja and the mending of fences with the BJP at the Centre), the party decided again to hit the action mode.

There was no new message or slogan -- it was old wine in new bottle. The loss of credibility continued. The TC now clutched at straws to regain lost ground, with a cynical disregard for public opinion. It opposed the removal of squatters from Tolly's nullah (canal) which was delaying the extension of the underground Metro network, to which Ms Banerjee was committed as Minister for Railways.

Her party again began taking out processions through busy streets, disrupting traffic, a practice she had denounced as Minister. The TC even supported insignificant parties like the SUCI and some Naxal groups for the January 10 bandh call, although she had denounced bandhs earlier.

For the record, the SUCI professes like the Naxalites, to be a radical Left party, which made them strange bedfellows for the TC, which is in the BJP-led NDA at the Centre. Observers marvel at the grotesque incongruity of the TC's recent political twists and turns in recent months.

Remember also that the TC had ditched the BJP over the Tehelka tape revelations prior to 2001 Assembly polls, and made up with the Congress(I), the party Ms Banerjee was expelled from. 'It would need a computer to keep track of Ms Banerjee's frequently changing alliances. The TC is the only party in India that has allied itself with the BJP and the Naxalites/SUCI,' is a common joke among Bengal journalists.

It was no surprise that on January 10, Ms Banerjee could not gather enough supporters to fill all the official buses brought by the police to carry away people wishing to court arrest. Most buses remained unfilled and the total strength of the TC supporters was only around 7,000, even fewer according to police estimates. This, after Ms Banerjee threatened to get together 'lakhs and lakhs of people who are fed up with the Left Front and that so many will come, the government will not know what to do'.

Observers link the TC's new-found activism to the crucial , if unannounced, agenda of its leader: to rejoin the NDA Ministry at any cost. With this in view Ms Banerjee has extended support to Defence Minister George Fernandes over the coffin scam, (although she had asked for his head after Tehelka), stopped sniping at the state BJP leaders, parted company with the Congress and expressed total support for the Union Government's response on Afghanistan and related developments.

The only question is, how long it will take Ms Banerjee -- she is the only TC leader with a following of her own -- to regain the kind of support she enjoyed only a couple of years ago? Only the TC hardcore has remained with her and unless she is a Union Minister again, it may be very difficult for her to keep even her dwindling flock together.