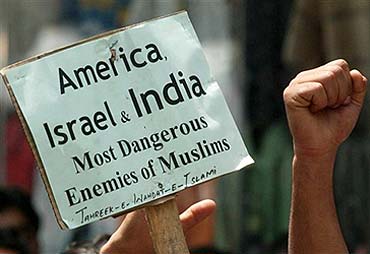 The recently-witnessed military conflict in the Lebanon underlined the difficulties faced by a state in dealing with cross-border terrorism sponsored by another state for achieving a strategic objective.

The main reason why India has not yet been able to effectively put an end to jihadi terrorism against it and its civilian population sponsored by the Pakistani Inter-Services Intelligence (ISI) is because India's counter-terrorism operations are directed only against the terrorists operating in its territory. They are not yet directed against the state sponsoring them despite a persistent demand from growing sections of the Indian population for targeting the state of Pakistan too.

The main reason why Israel has not yet been able to effectively crush the jihadi terrorism directed against its civilian population is because its counter-terrorism operations are directed only against the terrorists and not against the states sponsoring them--namely, Iran and Syria.

A study of the history of state-sponsored terrorism in any part of the globe would show that action directed against the terrorists alone, without targeting the states sponsoring them, does not help in ending the terrorism. Whenever a state sponsoring terrorism against another state is taught a lesson or collapses due to the contradictions in its own society, the terrorism sponsored by it collapses or withers away.

Terrorism sponsored by Libya against the US and other Western countries withered away only after the US taught the state of Libya a lesson that state-sponsored terrorism would not pay. This lesson went home to the Libyan leadership as a result of the various political, military, para-military and economic measures taken by the US against Libya since 1986.

The lesson from both these examples is that counter-terrorism operations directed only against the terrorists and not simultaneously against the states sponsoring them would not result in peace.

An outcome of the 9/11 terrorist strikes and the emergence of jihadi terrorism as the most serious threat facing the world is the passage of two resolutions against terrorism by the UN. These resolutions described terrorism as a threat to international peace and security and called for united action by the member-countries against all kinds of terrorism. The post-9/11 trauma made the world realise that terrorism is an absolute evil, whatever be the projected cause of it.

Unfortunately, this realisation has not led to appropriate follow-up actions in the form of firm action against terrorists, whatever be their roots and objective, and the states sponsoring them. Rationalisation and relativism have again become the order of the day. No one in his senses can say that Al Qaeda is an absolute evil, but not the Hezbollah operating against Israel under Iranian and Syrian sponsorship and the Lashkar-e-Toiba (LET) and other Pakistani jihadi terrorist organisations operating against India under Pakistani sponsorship.

The hypocrisy of the states, which condemned the recent operations in self-defence of the Israeli security forces against the Hezbollah while playing down the implications of the support extended to the Hezbollah by Iran, whose present leadership has openly called for an end to the state of Israel, and Syria, shows that the painful lessons of the catastrophes, which have repeatedly struck the world on 9/11 and thereafter, have been forgotten.

Instead of acting firmly against Pakistan, Iran and Syria, which remain the world's three main sponsors of jihadi terrorism, the international community has repeatedly chosen to exercise pressure on the victim-states not to defend themselves and not on the state-sponsors to stop their actions.

To restore peace in the Lebanon and the legitimate authority of its state over its entire territory, three simultaneous actions were required--a cease-fire arrangement, which would address the concerns of the people of Israel, who have been the victims of the depredations of the Hezbollah, the disarming and the demobilisation of the Hezbollah and an end to its role as a state within a state and firm action to put an end to the sponsorship of jihadi terrorism by Iran and Syria against Israel.

Only the need for a cease-fire has been addressed by the UN and that too in a manner, which would not address the concerns of the people of Israel. The other two issues, which are of even greater importance, have not been addressed. Unless these issues are also addressed effectively, blood will continue to flow due to the depredations of the terrorists who use the civilian population as a shield from behind which to operate.

The investigations into the Mumbai explosions of July 11,2006, have brought out how small numbers of jihadi terrorists recruited from India, with which Iran has been professing historic friendship, have been taken to Pakistan via Iran for training in committing acts of terrorism. One finds it difficult to accept that Iran would not have been aware of it.

These examples show the capability of the Iranian military-intelligence establishment to indulge in clandestine activities to promote its national objectives without being detected by the agencies of the rest of the world. The rest of the world would have every reason to worry that its military-intelligence establishment, which controls its nuclear programme, could one day take the world by surprise and confront it with a military nuclear fait accompli just as it confronted Israel with a vastly re-organised and re-armed Hezbollah.

These are matters, which need the serious attention of the international community.