Villagers Locked Up Inside Houses For Crowd Control During Yogi's Visit To Taj Mahal, Says Report

Yesterday, Adityanath swept the road outside the Taj Mahal, went inside the Mughal-era monument and described it as a gem and an integral part of Indian culture. 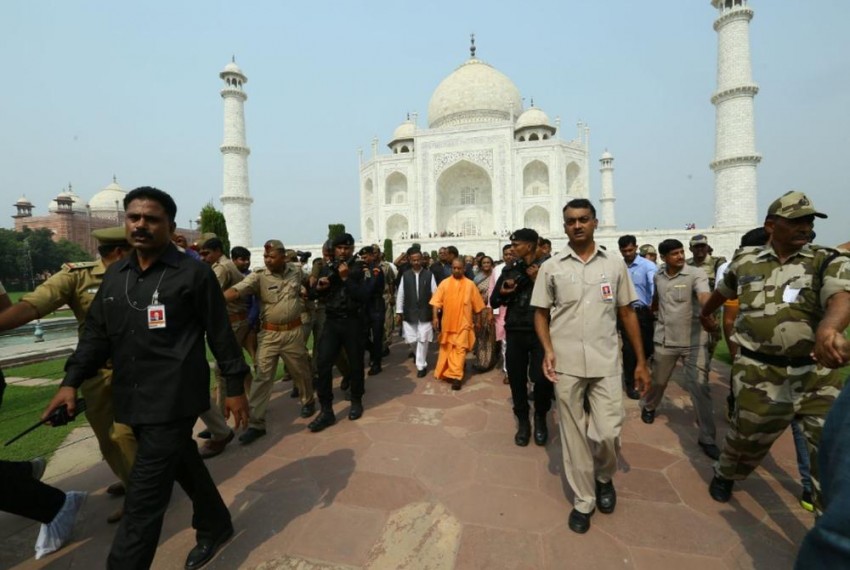 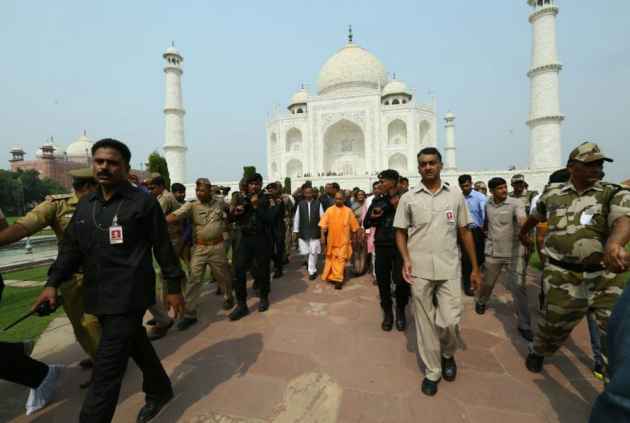 Residents of a village in Agra have alleged the Uttar Pradesh administration had locked them in their houses during Chief Minister Yogi Adityanath’s visit to Taj Mahal.

A News 18 report says that residents of Kachhpura village, near the Taj Mahal, alleged that they had been locked in their homes during Adityanath’s visit on Thursday morning.

Adityanath was reportedly supposed go through the 100-metre stretch of the village, which forms a part of the Mughal heritage walk, on foot.

The report says that doors to the villagers’ homes were bolted from the outside and that they were allowed to watch the ongoing commotion outside through their windows.

“We wanted to see CM Yogi Adityanath, but in the morning, police came and locked us all inside. This is strange. This diktat has spoiled our excitement. The entire village is locked inside their houses. What kind of security measure is this? Everyone is angry over this action by the administration,” a villager was quoted saying.

District Magistrate Gaurav Dayal told the news channel that security measures had been undertaken in the area due to the CM’s visit but that no one had been locked inside their homes. He reportedly said that the administration had allowed two members from a family each and that the rest were asked to stay indoors due to a ‘space crunch’ in the narrow lanes. Dayal added that the villagers were later asked to come out after Adityanath called for them.

The state BJP has also reportedly denied the incident, saying that no one had been locked up and that barricading had been done as a precautionary measure.

Yesterday, Adityanath swept the road outside the Taj Mahal, went inside the Mughal-era monument and described it as a gem and an integral part of Indian culture.

The much publicised visit, the first by a BJP chief minister of the state, comes days after the party's leaders and ministers made provocative statements against the famed symbol of love.

In what is being seen as a damage control exercise following the controversy over its place in Indian heritage, Adityanath also said the government was committed to the conservation of the 17th century monument, built by Mughal emperor Shahjahan in memory of his wife Mumtaz.

He also posed for photographs with foreign tourists and interacted with them.

Chants of "Bharat Mata Ki Jai" and slogans in Adityanath's praise could be heard as he walked the path leading to the Taj Mahal, along with state Tourism Minister Rita Bahuguna Joshi.

His decision to visit the Taj Mahal was announced after a series of controversies, beginning with a UP tourism department booklet not mentioning the white marble monument in its list of development projects in the state.

Subsequently, BJP MLA Sangeet Som said history would be rewritten to erase the Taj Mahal from it and BJP MP Vinay Katiyar said it was originally a Shiva temple.

But Adityanath sought to quell the controversy during a rally in Gorakhpur and again yesterday.

"We should not delve deeper into the details of why, when and how the Taj Mahal was built. What is important is that it was built by the wealth and hard work of India's farmers and labourers. It was built by the sweat and blood of the labourers," he said at a rally.

"The Taj Mahal is India's gem and a gift to the world. It attracts lakhs of tourists. It gives Agra a recognition and creates employment opportunities," he added..

This was a significant departure from his remarks at a rally in Bihar last year, when he had said it does not represent Indian culture and that foreign dignitaries should be presented with the Gita rather than Taj Mahal replicas.

Interestingly, while the chief minister was inside the Taj, his party's MLA from North Agra was telling reporters that the Mughals demolished a temple before building it.

"Mughals first demolished the Shiva temple and then built the Taj Mahal. It is a fact," Jagan Prasad Garg told reporters at the complex.

While interacting with reporters, Yogi dodged questions over Garg's remarks that there was a Shiv temple at the Taj Mahal, saying you should not pay heed to what others are saying.