It was the early '90s. New channels were popping up by the minute. They offered quick money, fast and loose lifestyles. Attractive girls were picked up as trainee correspondents... 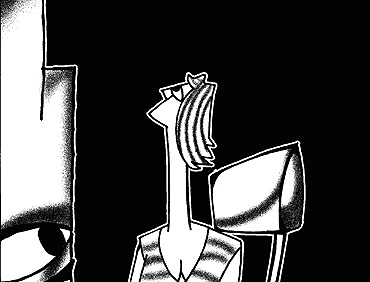 outlookindia.com
-0001-11-30T00:00:00+05:53
Deceptively close to the most important business district of the capital, hidden at the end of a forgotten street shaded by ancient trees with municipal rings, on the third floor of a newly constructed building with a semi-Jodhpur-pseudo-Flemish façade, is the Godavari Audio Visual Services. It was set up by one Vishnu Prakash Jain, who made his riches importing betel leaves to Lahore in the 40s and is currently run by his two sons, Gopal and Govind.

It was the early ‘90s. The television bubble had grown to cancerous proportions. New channels were popping up by the minute. This had given rise to a large number of private producers, regular businessmen who had abandoned their mainstay trades for a touch of glamour. The ones that come to mind are former garment exporters Shagufta and Yousef Alam, Delhi’s largest supplier of surgical gloves Atul Sood, and the dry-fruit Mogul Atmaram Badola who was the main supplier of pistachios to the Oberoi hotels.

Scores of young people straight out of university gravitated towards the bubble. The channels offered quick money, fast and loose lifestyles. Attractive girls were picked up as trainee correspondents. The rest were brought in as production assistants. They made tea and photocopies, sent faxes, labelled tapes and controlled traffic during shoots. Lucky few could become assistant cameraman, carry tripods and occasionally switch on the camera.

Govind the younger brother was more entrepreneurial of the two. He had great ideas of mixing business with pleasure. Well after office hours Godavari turned into a modelling agency, well-dressed young ladies would come to get their portfolios made. In his tastefully decorated office Govind held court with the girls. This was a good time to ask him to open his cabinet that housed expensive scotch. In these moments he revealed extreme charm and displayed uncharacteristic generosity of spirit.
The reception was manned by Pammi--my only true love. There was optimism in her low cut dress and hope in her cleavage. Because of her, the studio had a perpetual air of suppressed sexual tension. I felt deep sorrow when Govind, in absence of any other woman, took her to the high-band editing suite. I wanted to shield her from him, but couldn’t until I’d cracked the EC-780, the state-of-the-art editing controller that had just arrived. Neil Armstrong went to moon with less science than that required operating this monster.

Some afternoons when Gopal and Govind were away and Rectal disappeared into the lowband suite to watch porn, Pammi used to show me the u-matic tapes the brothers recorded during those evening sessions. Much of my sense of aesthetics was developed watching these video portfolios. On the background one could hear Govind’s instructions, his love for bare armpits. Over the years I assimilated the Jain notion of sensuality. The brothers feared no one except their father VP who would occasionally visit the studio and keep a check on his sons. I remember the macho bothers scurrying around to rid the place of any incriminating evidences before one such visit.

Godavari served as Shaolin Temple for me, the skills I learnt there made me the man I am, something that my dull years in Europe could never aspire to.