'Union And The States Must Complement Each Other' 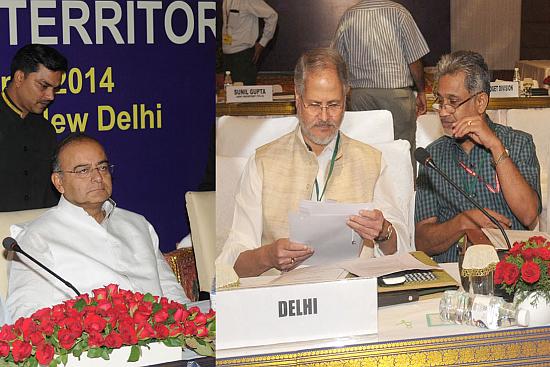 It is a matter of great pleasure that today we have got this opportunity to get together and hold extensive consultations regarding the Main Budget 2014-15. It is the policy of this government that “Team India” shall not be limited to the government sitting in Delhi but will also include states as equal partners in the growth of this great Nation. Discussions held today will be of immense help to the government in giving contours to the Budget proposals to be presented before the Parliament.

1.Union and the states must complement each other in managing the economy and the fiscal policy. This is the essence of cooperative federalism. It has been noted that while the growth of the country has crawled at sub 5% in the recent years there have been States registering much robust growth. This is clearly a case of sum being less than its parts and needs to be addressed through our concerted efforts. Mandate of 2014, clearly spells out that economic growth cannot be compromised at any cost and is sine quo non to reap the benefits of the demographic dividend. We owe it to our youth and underprivileged that we partner in this process of growth and its equitable redistribution.

2. Recently released data by Central Statistical Organization shows that Mining and quarrying sectors have gained a negative growth trend. The manufacturing sector has had an abysmal performance last year. The investment cycle has been disturbed. The negative sentiment has affected trade, hotels and transportation sectors which are posed for a slower growth compared to last year. Inflation continues to be rising with April figure at 8.9%.

3. The slow-down in economic growth coupled with high inflationary pressure poses a challenge to the macroeconomic environment. Tax collections are only at 10.0% of the GDP compared to the initial budget estimates of 10.9%. India can ill afford this trend and I believe that deliberation held today will be the first of the series of such deliberations and we will together steer the economy in the mutually agreed direction.

4. My government is committed to evolving a model of National Development which is driven by the States and we intend to extend necessary flexibility to States in achieving this. I urge the States to be fiscally responsible with this greater devolution of power. Intergenerational equity must be kept in view while deciding today’s spending. I appreciate the fact that most of States have been conforming to the FRBM targets. We must carry this forward.

5. As part of this economic integration, Goods and Services Taxes (GST) is one pending issue, on which now consensus needs to be built and implementation done at an early date. Implementation of GST has the potential to significantly improve the growth story. Many of you would recall that a decision to implement GST was taken in 2007-08 and an empowered committee was formed for building consensus on this issue. I have been informed that on many issues convergence of views has happened and there are some vexatious issues which only need resolution. I wish and hope that these will be sorted out sooner than later.

6. With a view to grant greater autonomy to states in scheme implementation it was decided that funds for Centrally Sponsored Schemes will be routed through the state governments. “Flexifunds” as part of this decision also exist to tailor the scheme implementation to meet the local requirements. I urge all of you to use this forum for making suggestions for improving implementation of various welfare programmes of the government.

7. Long inflationary trends have adversely impacted the food and nutritional security of the common man. We are committed to breaking this vicious cycle of high inflation and high interest rates. While, we look forward to your support in tackling temporary fluctuation in prices, we also would like to evolve a mechanism which addresses the structural issues that create supply bottlenecks. We need to look at the Essential Commodities act and put in place strict measures and special courts to stop hoarding and black marketing. The need for a Single Agriculture Market and real time information dissemination on prices to farmers and consumers are areas which need to be addressed. You will appreciate that these goals cannot be achieved without active cooperation of States. I urge you to address the areas of agriculture extension, public investment in agriculture including irrigation and agriculture marketing which fall under your purview. We will be there to support you.

8.While there is a National Food Security Act, the need of the hour is to implement the law in a cost effective and efficient manner for ensuring real “Food Security”. PDS as a vehicle to shield the poor from price rise has to be significantly improved. Some of the States have done extremely well in improving the delivery under PDS. We all can learn from them. We are committed to reviewing the successful PDS models and incorporate the best practices to revise the existing PDS, for benefitting the common man. Restructuring FCI for greater efficiency in delivering food grains is also on the agenda. Decentralized procurement of food grains provides an alternative and more effective model for food grain administration. I have been informed that only some States have adopted decentralized procurement but many have not. I seek your views on this matter.

9.We believe that growth can be revived through increased investment in the areas of Infrastructure. We have to think big and build an infrastructure which can cater to a growing population in coming years. Growth of infrastructure will also pull out sectors such as cement, steel and power etc from the current downturn and will lead to massive job creation. You will appreciate that this cannot be achieved alone by the central government without partnering with the States. Similar approach is also required to modernize our Industries. We should no longer remain a market for global industry rather we should become a global manufacturing hub.

10.We have now reached a stage where demographic dividend will be bereft of any meaning unless we improve access and quality of education and health services for teeming masses. Programmes like SSA, NRHM and PMGSY have improved access to these services, quality has however been questioned by many. We believe that not only access but there has to be a quantum jump in the quality of education and health services at affordable costs. I seek your support in achieving the objective of, quality education for all and assurance of health care for all.

11. I would like to stop here and invite you to share your suggestions for Budget 2014-15. I keenly look forward to your active participation in today’s deliberations.

'Putting The Indian Economy Back On Track Is Paramount'