Not having scored more than 250 so far in the Test series, India at 38-2 and chasing 354 for victory, face a daunting task with the entire fifth day to bat out. 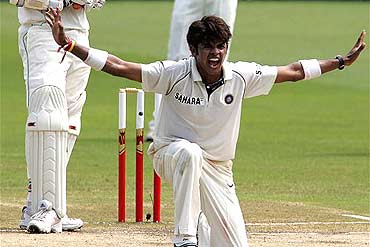 India were faced with a Herculean task of preventing South Africa from recording a series levelling victory in the second Test which was heavily loaded in favour of the home team today.

Chasing a stiff target of 354 for victory, India were precariously placed at 38 for two with Virender Sehwag (8) and Rahul Dravid (11) being sent back to the hut when play was called off early due to bad light again on the fourth day.

India would now have to bat out the entire fifth day on a last day Kingsmead wicket but the weather could come to the rescue of the visitors as overcast conditions have led to early closure of play on all the four days.

The target appears all the more daunting with the Indians having not scored more than 250 runs in any of the innings in the three-match series so far, a factor which must have been taken into account when Graeme Smith declared the innings on 265 for 8, about one hour before the tea break.

The Indians plunged into trouble early with Sehwag perishing cheaply yet again to an away going delivery while it was the prized scalp of Dravid immediately after the tea break which put the visitors completely on the backfoot.

Dravid, who has the temperament to play a long innings and hold one end up, was caught behind off Makhaya Ntini (2/14) who had also accounted for Sehwag.

The fifth day's play is likely to throw up an absorbing tussle between India's key batsmen like Sachin Tendulkar, who was yet to open his account, and Sourav Ganguly against the battery of South African pacemen. Wasim Jaffer was giving company to Tendulkar on 22.

Jaffer, during his stay of an hour, faced 40 deliveries and hit three fours in his 22 runs, looking elegant and promising to play once more a match-saving innings as he had done twice this year; centuries against England in Ahmedabad and in Antigua against the West Indies.

The hosts, resuming at their overnight score of 64 for no loss, survived a few anxious moments before posting 265 for eight in their second innings, thanks largely to the opening stand of 99 between Graeme Smith (58) and AB de Villiers (47); and later an association of 70 for the seventh wicket between Shaun Pollock (63 not out) and Andrew Hall (21).

Sreesanth was once again the spearhead of the Indian attack as he picked four more wickets to go with his four in the first outing as India tried their best to stop the hosts from reaching their intended declaration in double quick time.

After conceding an 88-run first innings lead, India put the skids under the hosts' batting, taking six wickets in the first session before Pollock combined with Hall to sooth the hosts' nerves.

Sreesanth brought about the shift in fortunes for the Indians, picking three wickets in the space of seven deliveries.

The topsy-turvy morning session was in tune with the way the match has progressed so far.

The Indians began with a defensive mindset as Sreesanth and Zaheer Khan bowled way outside the off-stump with packed offside field in an attempt to keep the hosts down who were 152 runs in front to start with.

De Villiers was the first one to leave on 99 when he edged VRV Singh to VVS Laxman at second slip for 47 runs.

Sreesanth, the star of the tour for the Indians, then picked up the baton and claimed three quick wickets to send quivers down the South African spines.

He began with the scalp of Hashim Amla, a virtual wreck on this tour, with a leg before shout to make it 108 for two on the penultimate delivery of his 13th over.

It soon was 121 for four when Sreesanth made a twin strike in his 14th over, first having Smith cleaned up for 58 runs and following it up with the first innings centurion Ashwell Prince (0) who guided his third delivery to Ganguly in the slips.

Smith, in his first substantial innings of the tour, batted for 162 minutes in all, hitting 11 fours from 81 balls.

India were now on a roll and poor strokes by Herschelle Gibbs (9) and Mark Boucher (8) made them slip to 143 for six with 50 minutes still to be negotiated for the lunch break.

Gibbs spooned up Anil Kumble to short extra cover and Boucher was leg before to Zaheer for eight as South Africa suddenly were gripped by the fear that they could lose the match.

However, Pollock and Hall steadied the innings with some sensible batting, hitting crisply but mostly defending stoutly.