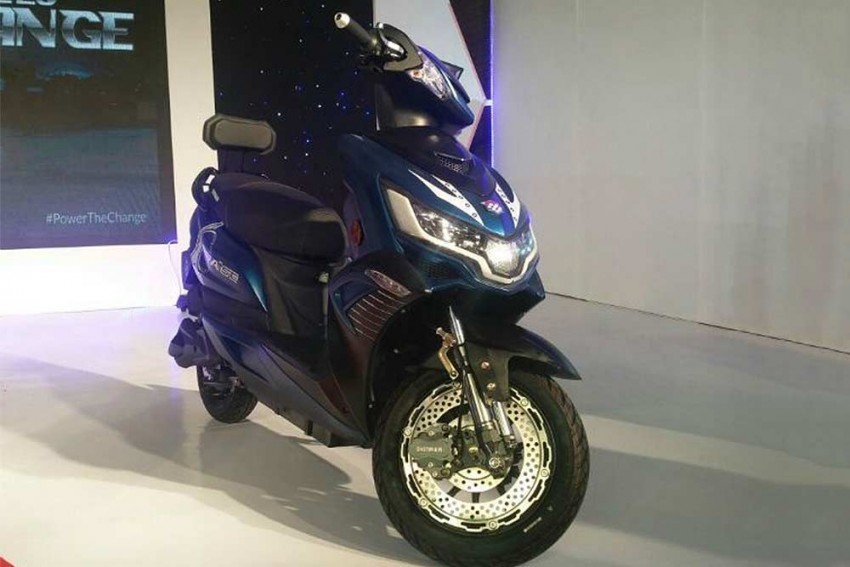 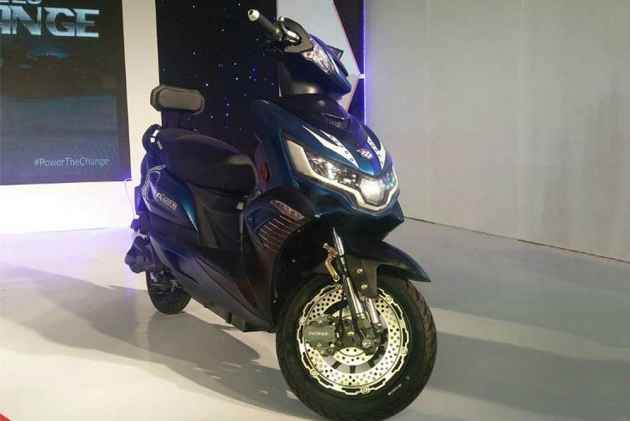 Okinawa, the Rajasthan-based electric two-wheeler manufacturer, launched a new electric scooter, the Praise, which is priced at Rs 59,899 (ex-showroom Delhi).

On the design front, it is a clear standout with its sporty and futuristic look. The e-scooter features a fast-looking V-shaped LED headlamp with LED DRLs. Other interesting features include an anti-theft sensor, keyless entry, ‘Find My Scooter’ function, an all-digital instrument console and more.

The motor has a claimed power output of 2.5kW and peak torque of 18-40 Nm, with a range of 170-200km. The Okinawa Praise also gets three different riding modes - Economy, Sport and Turbo.

With a company claimed top speed of 75kmph, the Okinawa Praise ranks as the fastest e-scooter once can buy in India today.

Suspension duties are handled by gas-charged telescopic front and rear shocks. The Okinawa Praise is also the first scooter to get dual disc brakes up front and a single disc at the rear. 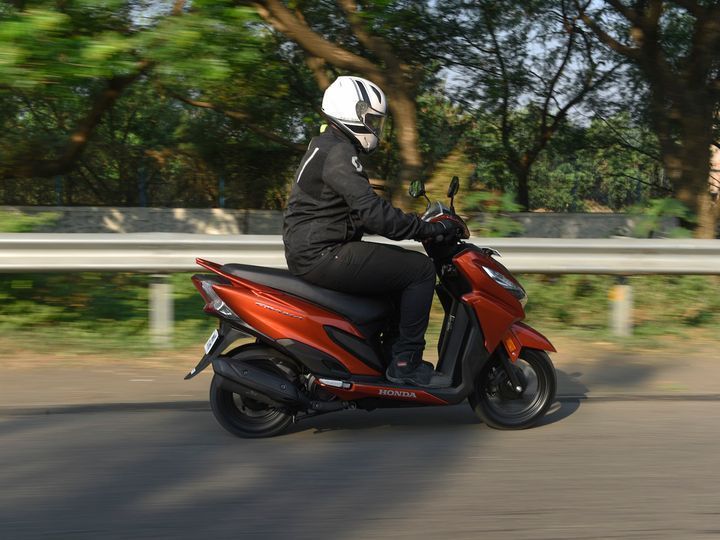 Honda launched the snazzy looking Grazia in November 2017 at a price point of Rs 57,897 (ex-showroom Delhi). The Grazia is Honda’s second addition to the 125cc segment, sitting alongside the Honda Activa 125. A couple of firsts the Grazia showcases include LED headlamps, an all-digital instrument console, 3-step eco meter and 4-in-1 lock with seat opener switch.

In order to tackle our not so even roads, Honda has equipped the Grazia with telescopic front forks and a monoshock unit at the rear. Braking is taken care of by 130mm drum brakes on the standard variant, while a 190mm front disc brake is an optional extra and available on the deluxe variant. CBS (Combi Braking System) is available as standard across all variants though. Click here for a road test review of the Honda Grazia. 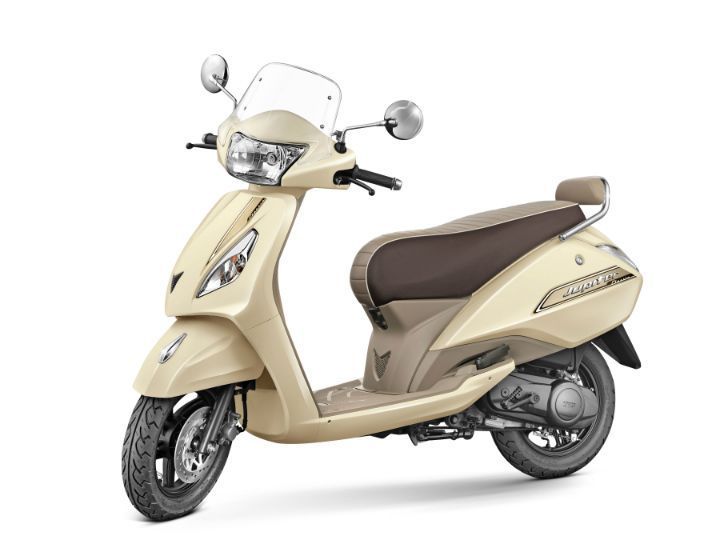 In August 2017, TVS Motor added a new variant to its successful scooter brand Jupiter and termed it as the TVS Jupiter Classic edition, priced at Rs 55,266 (ex-showroom, Delhi). The Jupiter Classic is the most expensive variant in the Jupiter scooter range.

The scooter gets some retro design elements like a windshield, round chrome mirrors and a backrest to give it a retro feel. Other design elements that give the Jupiter a classic touch includes dual tone seat, chrome-finished bar ends, silver oak-shaded panels and new graphics. It also features a fresh colour addition, which TVS calls Sunlit Ivory.

The new edition continues to be powered by the same 109.7cc, single-cylinder, air-cooled engine that’s seen on the standard version. Peak power output of 8PS and 8.4Nm of torque is sent to the rear wheel via a CVT gearbox.

Suspension duties are handled by telescopic front forks and a monoshock unit at the rear. Braking is taken care of by a 220mm front disc and a 130mm rear drum brake.

A USB mobile charging port is available as standard and other features common with the standard variant include an external fuel filler cap, reserve light, power/eco mode and a pass light switch. 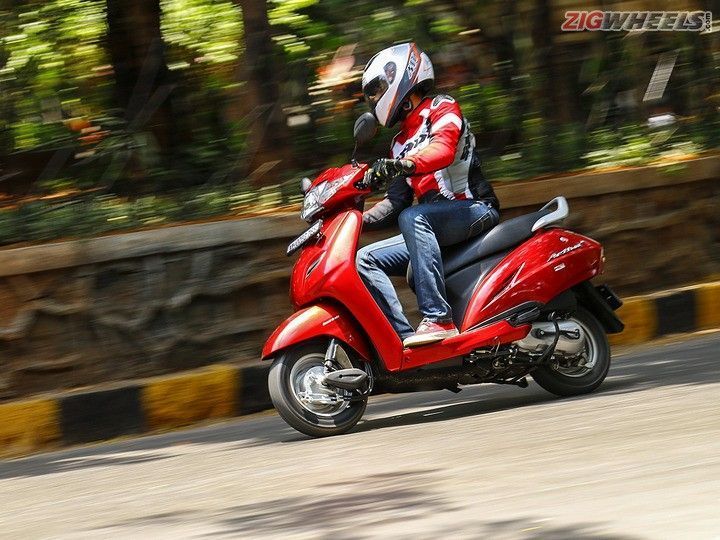 The Activa is by far the highest selling two-wheeler in the country. Honda launched the BS4 version of the Activa under the name Activa 4G in March 2017 for Rs 50,730 (ex-showroom, Delhi).

Fortunately, with BS4 compliance, there is no change in performance numbers of the scooter and it continues to pump out the same 8.11PS of peak power and 9Nm of peak torque, which is transmitted to the rear wheel through a CVT gearbox.

Another additional feature that the scooter receives is a mobile charging socket placed in the underseat storage area. Previously seen features such as Combi Brake System and tubeless tyres are carried forward on the new model. 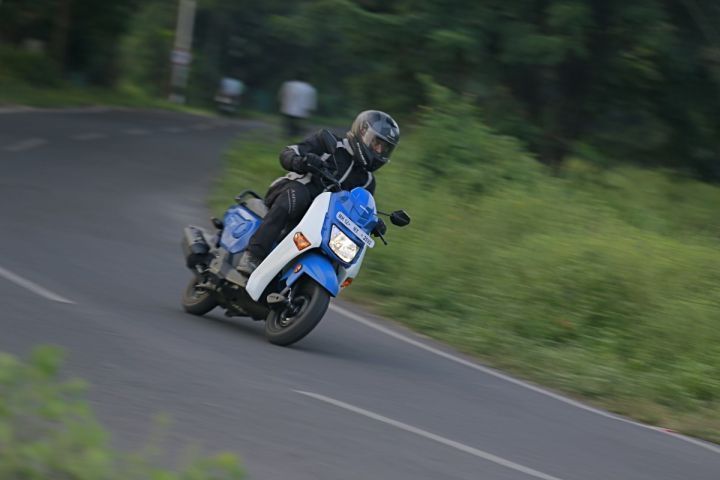 The Cliq looks as quirky as the name given to it. Honda initially pitched it as a scooter targeted at the rural areas but our tests proved it to be more of an urban scooter that will find its place amongst youngsters. Some of the elements like the knobby tires and the wide and long seat do seem fit for the rural setup but that's about it. The flimsy plastic body panels and lack of adequate storage space are a letdown but enough for college goers that are tight on budget. Plus, the low quality plastic means cheap replacement costs in case of a crash.

The scooter feels peppy thanks to the same four-stroke, air-cooled and carburetted 109.19cc engine that powers the Activa and the Navi. There is no change in performance figures either and the Cliq generates 8.11PS of power and 8.94Nm of peak torque, which is ample considering it’s 6kg lighter than the Honda Activa.

Handling is also nimble and the suspension setup includes a bottom link suspension up front and a monoshock at the rear, both derived from the Activa. Set on the stiffer side, jerks do seem to unsettle the rider but with two up it isn’t a concern.

Braking is managed by 130mm drum brakes on both ends and CBS (Combi-Brake System) is standard. Some of the additional accessories include mobile charging point, a small load carrier and a small storage compartment sitting on the floorboard.

The Honda Cliq was launched in July at an ex-showroom, Pune, price of Rs 43,076 for the standard variant and Rs 43,569 for the deluxe version.