To Hug Or Not To Hug: Debate At CWC Meet Over Rahul Gandhi’s Jaadu Ki Jhappi

Rahul embraced Prime Minister Narendra Modi right after talking up peace and forgiveness as the basis for Congress politics. 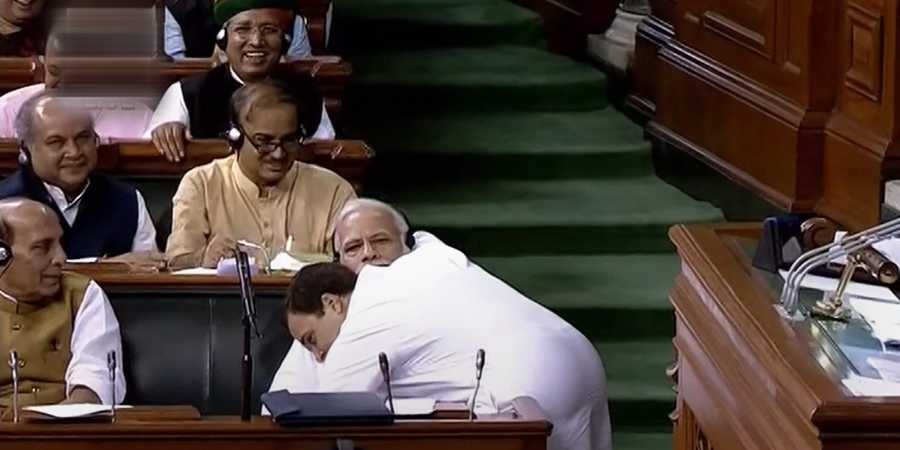 To hug or not to hug — that was the question raised by several Congress leaders at Sunday afternoon’s CWC meeting. The context was party president Rahul Gandhi’s speech in Parliament on Friday that ended with a theatrical flourish. Rahul embraced Prime Minister Narendra Modi right after talking up peace and forgiveness as the basis for Congress politics.

The hug captured headlines and drew attention to Rahul, whose speech was supposed to signal his political coming of age. Nevertheless, when Congress leaders from all over the country sat down on Sunday to discuss their strategy for the coming state elections and the 2019 polls, the hug featured prominently in the discussions, and not all seemed to be on exactly the same page as Rahul.

Several Congressmen raised the hug to underscore that it would not make a dent in the politics of the BJP. The leaders did not directly criticise the Congress president’s gesture towards the PM, but they said the symbolism he had tried to project would be “lost” on the BJP. They felt that the “language of love” would not change the BJP’s attitude towards the real issues Rahul had raised in his address. They also stressed that both the politics and the language of BJP and Congress are directly opposed to each other.

In response to the misgivings, which were apparently raised by 5-6 leaders, Rahul said the Congress lives by Gandhian principles and will continue to stand by them. He told Congress leaders that all of them also have to guard against “crossing the line” in their language and deeds and not to stray from the party line.

“Lots of leaders said lots of things at the CWC meeting. It came up during discussions that this was the first time that a ruling party had disrupted Lok Sabha to the extent that proceedings had to be adjourned,” said Shaktisinh Gohil, CWC spokesperson, on the no-confidence motion proceedings, during which Rahul delivered his speech.

“It is in this context that Rahul Gandhi had said at the CWC meet that Congress party leaders should never overstep boundaries in their speech,” he said.

“The signal for Congress grassroots workers will come from the top. There is free speech but when the top leaders won’t cross a ‘lakshman rekha’ in word or deed our on-ground workers will follow suit,” Congress spokesperson Randeep Surjewala said on Sunday.