More than 10,000 people joined a march in Melbourne where protestors chanted "always was, always will be Aboriginal land" 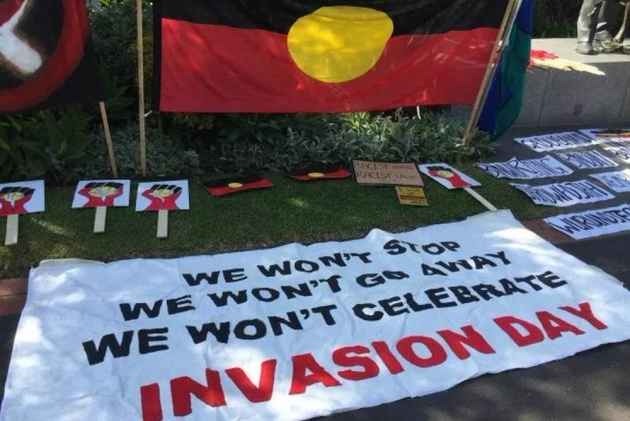 Tens of thousands of people marched across Australia today in an "Invasion Day" protest calling for a rethink of the national day they say is offensive to indigenous people.

The annual January 26 Australia Day holiday commemorates the arrival of the first British settlers in 1788, but for many Australians it marks the beginning of colonial oppression of Aboriginal people.

"Australia is a diverse culture now, and we need to be inclusive to everyone, so change the date (of the national day)," Melbourne protestor Rachel Muir told AFP.

More than 10,000 people joined a march in Melbourne where protestors chanted "always was, always will be Aboriginal land", and holding banners stating "You are on stolen land".

Thousands more people rallied in major cities across the country.

"Australia has to come to terms with our indigenous peoples," protestor Greg Hunt told AFP.

"To celebrate Australia Day on the day that Europeans invaded Australia is an affront and very, very disrespectful to the people whose land we took."

Divisions have deepened in recent years with increasing calls to change the date and protests increasing in size.

In 2017 three local councils in Victoria state voted to no longer recognise January 26 as Australia Day.

Last November youth radio station triple j, whose traditional Australia Day "Hottest 100" music countdown has become synonomous with the national holiday, announced it was moving the event to a different date due to "increasing debate" on the issue.

Prime Minister Malcolm Turnbull has long-resisted calls to change the date as divisive.

"We recognise that the history of European settlement in Australia has been complex and tragic for indigenous Australians," he said in a recent speech.

"But above all on Australia Day we recognise and celebrate our achievements as Australians."

"I'm disappointed by those who want to change the date of Australia Day, seeking to take a day that unites Australia and Australians and turn it into one that would divide us."

Aboriginals, whose cultures stretch back tens of thousands of years before the British arrived, remain the most disadvantaged Australians, with higher rates of poverty, ill- health and imprisonment than any other community in the country.

They were believed to have numbered around one million at the time of British settlement, but now make up only about three percent of the total national population of 24 million -- meaning there are now fewer Aboriginals than when the first Britons arrived.

Australia day is celebrated across the county, with picnics, traditional Aboriginal performances and citizenship ceremonies, where close to 13,000 new Australians pledged their commitment to the nation today.

A recent poll suggested most Australians were laid back about their national day, and most people do not know why it is held on January 26.

The survey of 1,417 Australians by the Australia Institute found that just over half of respondents did not mind when the day was celebrated.