Home  »  Website  »  International  » Opinion  »  The Wrong Guy Got The Prize?
View From Pakistan

The Wrong Guy Got The Prize?

Bah! The usual claims and charges followed the Nobel Peace Prize for Dr. Muhammad Yunus and the Grameen. The most polemical, even comical, argued that Wal-Mart's legendary founder Sam Walton deserved it more. 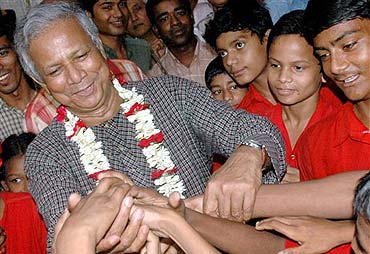 The usual wrong-guy-got-the-prize claims have followed the Nobel Peace Prize for Dr. Muhammad Yunus and the Grameen Bank. But one of these claims stands out: that Wal-Mart’s legendary founder Sam Walton is a better candidate for the Nobel Peace Prize than Dr. Yunus and Grameen. As John Tierney argued in the New York Times (October 16), no-one has done more for reducing ‘Third World’ poverty than Wal-Mart and that getting a job at Wal-Mart is the best way to a better life for the world’s poor.

It sounds polemical, even comical. But it is probably best intended as a stylized version of the argument that globalization is helping eliminate poverty. The mainstay of this argument is job creation by foreign direct investment (FDI) in developing countries by multi-national corporations such as Wal-Mart. In China, it is pointed out, Wal-Mart may be responsible for creating an estimated half a million jobs a year for more than a decade. Even stated this way, the claim shows how ill-understood Dr. Yunus, Grameen, poverty alleviation and, indeed, the Nobel Peace Prize remain.

Dr. Yunus is not your average do-gooder. He has that rare distinction of having contributed an innovation to the field of finance and of establishing a gargantuan machine for attacking abject poverty—the Grameen Bank. Wanting to lend to the poorest of the poor, Dr. Yunus was faced with a foundational problem: how to create an incentive against loan default. He cracked the puzzle with the idea of a five-person ‘loan group’. Each loan is given to an individual but five borrowers bound into a loan group are jointly responsible for each repayment installment.

Dr Yunus went on to scale this idea up with the Grameen Bank. Grameen’s business model aims solely to provide credit to the poorest for income-generating work. The Grameen model is: one-year loans (of $150, on average—micro-credit), equal weekly installments, an annual interest rate of 20 percent (competing with the rural money-lender’s 120 percent or more!) but no collateral and no paperwork—just the loan group and a relationship with a loan officer who stays in very good touch.

The Grameen Bank has over 6.7 million borrowers in Bangladesh—over 90 percent of them poor women. And lending to women is a business decision, not an ideological one. Grameen found them to be more responsible borrowers and more likely to invest in their own families than men from the same backgrounds. Take an average of 5 persons per Bangladeshi household and you get over 30 million lives influenced by Dr. Yunus and Grameen in Bangladesh alone. That is one in every five people in Bangladesh. And the Grameen model has been replicated in over 100 countries. That ought to catch Wal-Mart’s envy.

With all this said, Dr. Yunus is not just a pioneer of finance and Grameen is not just a lender. Their mission is to give meaning and purpose to the lives of the poor while putting ‘poverty into the museum’. Each Grameen borrower also agrees to make Sixteen Decisions which inculcate simple values such as discipline and hard work as well as practical undertakings for Bangladesh’s rural setting such as growing vegetables, using pit-latrines, not giving or receiving dowries, earning to pay for children’s education, etc.

More than this, Dr. Yunus and Grameen have proved what is still considered counter-intuitive by most people on this planet: that the poorest are bankable. The loan default rates for the poor are less than 10 percent practically all over the world. Dr. Yunus and Grameen have placed the onus on the rest of us to answer the question: what business model have you come up with to pull the poor out of poverty? That is what deserves the Prize.

The Nobel Peace Prize is not an annual performance bonus. And its prize money is not an investment for generating employment. Despite some controversial awards, the spirit of the Nobel Peace Prize has been to recognize a lifetime spent in the selfless pursuit of a better, more peaceful world. The laureate is lauded for giving an inspiring new vision of such a world not just to us living in the world today but to generations to come. Dr. Yunus and Grameen meet these criteria without competition from Sam Walton and Walmart.

Dr. Yunus and Grameen are focused on providing a dignified way out of poverty for the poor. Wal-mart and other multinational corporations are focused on maximizing profits and job creation is a by-product of this pursuit. Beyond these definitional arguments, FDI cannot be expected to reach the poor in every country anytime soon. According to the World Bank, in 2004, 60 percent of the net FDI flow of US$ 165 billion to developing countries went to only five countries: Brazil, Russia, India, China, and Mexico. By comparison, Bangladesh received US$ 449 million dollars of FDI in 2004. That is some US$ 3 per Bangladeshi compared to Grameen’s $150 per borrower. Grameen’s focus on the poorest is clearly much sharper than Walmart’s.

All told, the debate about whose numbers look better is useful mainly to those who are blind to the complex ways poverty alleviation works. Only people whose contact with the poor is restricted to global poverty statistics are likely to take an ‘either you’re with us or with the poorest’ approach. To grow out of poverty, the poor don’t just need jobs at Wal-Mart facilities. They also need institutions tailored to serve their aspirations and to channel the non-poor world’s immense wealth to fuel the productive activities of the poor. The Wal-Mart factory worker can well use a micro-loan to start a small new operation to supply the factory. In this respect, Dr. Yunus and Grameen have shown that the poor are not that different from the non-poor. Both need jobs where they get training and credit for starting new operations where they apply their training.

Both Wal-Mart and Grameen are needed to eliminate world poverty. Who knows, there may be a couple of future Sam Waltons hidden among Bangladesh’s poor.

Kazim Saeed is developing a micro-equity fund in Karachi, Pakistan.

Who Is A Fascist?