Fahter, son, and the holy ghost of a party. Sanjay Nirupam, Narayan Rane ... and now Raj Thackeray declaring war on "the pimps around" Thackeray. But he can't take the Congress route, and it is not so easy doing what his uncle did, way back in 1966.< 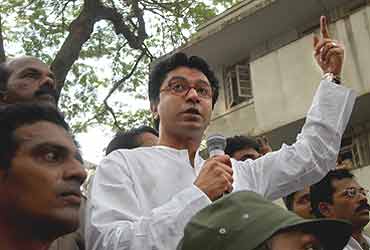 "Balasaheb was, is and will remain my God but I have nothing to do with the pimps around him," thundered Raj to thousands of supporters outside his Shivaji Park house on Sunday. "The Shiv Sena is run by a four-six clerks…they have taken a ‘supari’ to finish it off and I cannot be party to such a sin. My people have been systematically sidelined, I have been kept out of everything. I don’t want the top job but I cannot tolerate this any longer. I resign from all posts in the Sena."

It was a masterstroke in the sense that he had challenged - and openly so - Uddhav and his coterie while revering Thackeray as his deity. Ironically, it was Raj who had proposed Uddhav’s name as working president at the Mahabaleshwar conclave in 2001. Steadily since then, Uddhav’s influence and control over the party has grown, and Raj has been ignored. "It seems I had shot myself in the foot that day," rued Raj.

Minutes later, as impassioned supporters unleashed Sena-style violence on cars, bikes and people belonging to the Uddhav camp, it became clear that this is, indeed, the war within. The Sena’s culture of violence had come home, its language of hate had been directed towards one of its own. Raj and Uddhav will henceforth be two parts of a family, two different faces of the Sena, two polarized options for lakhs of Sainiks. The political lesson - that when the family is the party, expect an acrimonious outcome - is not too different from a ‘brotherly’ spat over the country’s largest corporate empire earlier this year

Raj and Uddhav present a study in contrasts. They have individual characteristics that complement each other, ironically the combination is what the party badly needs at this juncture if it must keep its political identity and future intact. Raj is the natural leader of people, militant and flamboyant, given to grandstanding and extreme options. Uddhav is the sober and sophisticated strategist, the archetypal backroom guy given to quiet networking and a modern approach. Uddhav wants the Sena to get out of its thuggish hangover, Raj wants to go back to the streetfights. Their visions for the party - and for themselves - are as different, even contradictory. There’s space for one of them, not both. It’s a fierce and bitter power struggle. The split was to happen, and the question was when would Raj reach breaking point. 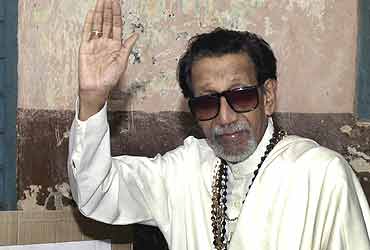 But it wasn’t always like this. Raj, the only son of Thackeray’s brother Shrikant, spent more time with his uncle learning to cartoon and paint, growing up with cousin Uddhav and his brothers, often calling late Meenatai Ma. Meenatai, Thackeray’s wife, was also Raj’s maternal aunt. As it turned out, Raj resembled his uncle, adopted his mannerisms, learned the nuances of his style, replicated his oratory and thought in personal life as well as on stage. By the late 80s, Raj was given the job of traveling across Maharashtra to build the Bharatiya Vidyarthi Sena, and he styled it as mini-Sena with the same aggressive ideology and violent methods. Raj sat in on the political meetings at Thackeray’s bungalow ‘Matoshri’ while Uddhav indulged in his twin passions of wildlife and photography.

In mid-90s, Raj was heading for the top job. When it came to the crunch in 2001, Thackeray chose Uddhav, finally anointing him working president. Raj, caught on the back foot then in a murder case, couldn’t really complain. Uddhav had the throne but the real power behind the throne would always be with him, or so he would have thought, because Uddhav was such a novice, not a true "Shiv Sainik". That may have been the script but the reality turned out different. Uddhav asserted his own style and agenda which was unlike that of the old Sena: He aspired to make the party more acceptable, he wanted debates on developments and issues, he called for inclusiveness (Mumbaikar, not Marathi manus) that Sainiks had never heard of before. Raj’s politics, agenda and methods did not fit in anywhere. Eventually, Raj himself did not. Also, Uddhav realized that he could not be secure as long as he depended on Raj for his politics. The battle for supremacy finally drove a wedge between the two. Whenever Raj sulked - at least thrice earlier - Thackeray would broker a truce but essentially for public consumption. For his own political future, Raj has exercised his last option - war on Uddhav.

Narayan Rane’s revolt in July this year opened the doors for Raj, albeit in a roundabout way. The issues they have raised about the party’s future, about Uddhav’s style of functioning, about a self-serving coterie are the same but Raj cannot take the Rane route to the Congress. Being a Thackeray is an albatross round his neck. His future, he believes, lies in creating his own organization on the lines of the Shiv Sena, as it originally was, even if it is with the backing of Sharad Pawar. Easier said than done, even if a handful of MLAs, few MPs and one-fourth of the 103 Sena councilors in the Brihanmumbai Municipal Corporation - all disgruntled with Uddhav - pledge support. He cannot promise them anything now unlike Rane or even Uddhav. In an age of remixes and re-makes, Raj plans to re-make what his uncle and 17 others did in 1966. Re-makes have their limitations, serious limitations.

Having become wiser after the Rane episode, when they played into his hands, Thackeray and Uddhav have chosen a different strategy to counter Raj. Raj would like Uddhav to expel him from the party - an unthinkable for a Thackeray - so he becomes the legitimate victim. Uddhav wants to ‘expose’ Raj, wear him down, call his bluff. The nitty-gritty of gathering support from amongst the Saniks itself will open Raj’s eyes to reality, believes Uddhav. The mediation efforts are on but if push comes to shove, he will take the extreme and ultimate step but only after neutralizing Raj’s support base to a minimum. For now, Uddhav is content to play the emotional card: "Raj is my younger brother…he has resigned from party posts, how can he resign from the relationship?"

In this battle between brothers, Thackeray thundered in the party newspaper Saamna: "the Sena isn’t anybody’s private property…those who have grown up in the shadow of the Himalayas should not believe themselves to be bigger than the Himalayas". He is the court of last appeal, he is the only one who still has the power to persuade Raj to return to the fold - the family and the party. But for all purposes, the father has backed his son and the nephew must make his peace. Raj is beyond emotional appeal. It’s too late for him to turn back, even if he so wishes, but not easy to totally cut himself off. A Thackeray who’s not a Shiv Sainik? It’s certainly not a happy present for his uncle’s landmark birthday.

'Gonychi Navi Sakal': Mamata Banerjee On 2-Day Goa Trip, But Not On 'Vacation'