All that you wanted to know about the US financial crisis but were afraid to ask -- a quick FAQ for those who don't wish to wade through dense treatises on collateralized debt obligations, asset backed commercial papers, and blah-yada-blah. 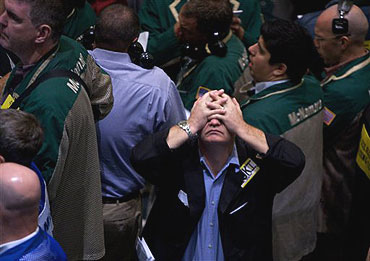 If you don’t understand the financial crisis on Wall Street, don’t fret. No one does, least of all the experts. What we do know is that it is an unholy mess, which is about to get worse. Here’s a quick FAQ for those who don’t wish to wade through dense treatises on collateralized debt obligations, asset backed commercial papers, and blah-blah-blah. It’s hardly comprehensive, but it can serve as a starting point for engaging with the issues surrounding the greatest financial debacle since the Great Depression.

Do the roots of this crisis lie in the housing bubble?
The roots are all over the place (in the absence of regulation and oversight, for instance), but for the sake of simplicity, let’s say yes. After 2001, the Fed kept its interest rates low in order to increase liquidity and encourage spending. Financial institutions offered easy credit to those who wanted to borrow money to buy a house. Many who did not qualify for loans at regular market rates – the subprime borrowers – were persuaded to take out mortgages despite the fact that their income level, ability to make a down payment, and credit history made them high-risk debtors.

Why did so many borrowers take out mortgages?
As the number of buyers increased, the values of homes started going up. And as the values of homes started going up, the number of buyers increased. Everyone wanted to jump on the gravy train. In 2005 and 2006, 40% of homes sold in the U.S. were purchased as either investment or vacation homes. Financial institutions offered subprime borrowers "teaser rates" which were scheduled to go up after a period of time (these were the so-called ARMs – adjustable rate mortgages). Existing homeowners assumed that the value of their principal asset – their home – had increased (when they noticed, for example, what their neighbors’ home was selling for) and refinanced their mortgages, spending the borrowed money.

Why did the financial institutions lend so much money to these "subprime" borrowers? Weren’t they worried about defaults?
Not really. For one, most mortgage brokers do not lend money of their own; they merely collect commissions. Besides, the system is geared towards increasing revenues and profits in the short run. Bonuses are linked to current performance. But more importantly, many of these institutions were not planning to take much of a risk. Because of a lax regulatory system, these loans were allowed to be "securitized". In other words, the rights to these mortgage payments along with the accompanying credit risks were sold to third-parties.

So the risk passed on to the third parties then?
In some cases, yes. But for the most part, these third parties cut up these securities, mixed them up, repackaged them, and sold them down the line in the form of Mortgage Backed Securities (MBS) or Collateralized Debt Obligations (CDOs). There was little, if any, regulatory oversight. At each step, the parties in this chain collected profits, and believed they were handing off the risk.

What was the role of AIG?
AIG offered insurance to those who bought MBSs and CDOs in exchange for a fee. Credit rating agencies such as Moody’s and Standard and Poor’s gave a high grade to these securities, thus reducing the amount of collateral that AIG was required to post in order to demonstrate that it had the ability to make payments in case there were defaults.

I am not sure I understand.
Assume that you bought $1 million worth of securities. You are worried that the assets behind these securities are not a sure bet. So you hedge by buying $1 million insurance from AIG. If there is a default on the payment, AIG pays you your $1 million. These are the so-called "credit-default swaps". Pay attention to that term. We will hear a lot about it in the near future. There is currently a $62 trillion (yes, that’s a trillion) market for these swaps which is absolutely unregulated.

How much is a trillion anyway? Apart from being a large sum of money?
As figures keep getting tossed around, one begins to suffer from number fatigue. How does one make sense of these large values? Here’s one way to imagine a trillion dollars. Let’s say you have a magic machine that spits out a $100 bill every second, all day and all night long. In the first minute, you’d have $6,000. In the first hour, $360,000. In the first 24-hour day, you will possess more than $8.6 million. A year later, you’ll have a little more than $3.15 billion. In other words, it will take you and your machine more than 317 years to produce a trillion dollars.

So, back to our story. Wasn’t everyone making money?
Until a point. But as usually happens with a bubble, the quid came calling for the quo. Subprime borrowers defaulted on their loans when the higher ARM rates kicked in. Foreclosures increased, putting a pressure on the now heavily inflated home prices. Excess inventory created by builders and speculators during the boom started to mount. As prices began to deflate, owners found it increasingly difficult to refinance their homes. The MBSs were not so attractive any more.

So institutions that owned MBSs were in trouble?
Exactly. Bear Sterns was the first to crash. The Feds had to step in and facilitate its "sale" to JP Morgan at the cost of $29 billion to the taxpayers.

And why did AIG stumble?
Credit rating agencies woke up to the fact that they had assigned AAA ratings to relatively worthless securities, so they downgraded the credit of AIG, requiring it to post additional collateral. Since AIG didn’t have the billions it would have taken to do this, it had to be rescued if it was to be prevented from declaring bankruptcy.

Why would that have been such a terrible thing?
If AIG went under, all those who had hedged their bets would have suddenly found themselves in a heap of trouble. They would have most likely gone belly-up too.

So AIG was too important to allow it to fail?
That is the narrative being bandied about. But the bailout wasn’t about AIG. It was done in order to save its "counterparties", the ones who had bought insurance.

Who were these counterparties?
We are not sure. But most of them (around three-quarters) were probably European banks.

Why wasn’t Lehman bailed out?
We don’t know. Perhaps it was the luck of the draw. It came second in line (after Bear Sterns) and maybe the government wanted to play it tough. Or perhaps its counterparties were not important enough to rescue.

What was the story with Freddie and Fannie?
Mac ‘n Mae owned or guaranteed many of the MBSs and several mortgages that were subsequently bought by foreign banks (China was a big player), who assumed that these government sponsored enterprises (GSEs) would not be allowed to fail. Since foreign funding (those trade surpluses China has with the U.S.) are essential to making up budget (and trade) deficits, the government had to step in and rescue the GSEs, lest foreign capital wander off elsewhere.

Now what?
The U.S. government is planning to bail out the financial institutions whose reckless greed produced the mess in the first place.

What if it doesn’t?
Financial institutions devastated by this crisis have very little capital to lend. Without the credit that they provide, the economy will suffer. How much is unclear, but the impact is likely to be quite severe.

What does the administration want?
The Treasury Secretary is asking for unfettered access to $700 billion in order to buy any asset from any institution at any price he thinks is right. Further, the Secretary says that his decisions will be "non-reviewable and committed to agency discretion, and may not be reviewed by any court of law or any administrative agency." The government plans to buy up the MBSs at a price it determines (critics worry that lobbyists of the financial institutions will play a role in this), thus freeing the institutions to infuse credit into the markets.

Who will foot the bill?
Ordinary citizens – the taxpayers – who will see a skyrocketing deficit, and most likely, shrinking investments in public goods, dwindling retirement accounts, and greater inflation.

Is there any alternative?
If it doesn’t want to think outside the box (and it is clear that it doesn’t), the least the government should do, in my opinion, is to demand an ownership stake in the companies it bails out. That way, if the firms recover, the money can be returned to the treasury. The current plan only rewards those who drove the economy into the ground, and who made a lot during the good times.

So one final question. Was the crisis primarily caused by irresponsible borrowers who took on loans that they did not have the ability to repay?
No. It’s true that defaults on mortgage payments, especially in the subprime segment triggered this crisis-in-watitng. It is also true that borrowers, both prime and subprime, failed to read the fine print, took out larger loans than they could afford to repay, and got carried away by the thought of buying property that was supposed to keep increasing in value. But the subprime loans were pushed by an unscrupulous industry, which preyed on a population that did not have the wherewithal to figure out the swindle before it was too late. A lot of educated, middle-class Americans lost a whole lot too, but the subprime crisis represents the greatest transfer of wealth from the poor to the rich in recent times, and the greatest loss of wealth for communities of color in the post Civil War period.

Mir Ali Husain is a professor of management. He teaches in New York City. He is also the co-author of Anthems of Resistance: A Celebration of Progressive Urdu Poetry and the lyricist of films such as Dor and the forthcoming Aashayein.