Having reduced a once significant anti-colonialism to a self-serving dogma, Mugabe and his party's addiction to power will further indulge an equally self-serving Western appetite for spectacles of Third World despotism 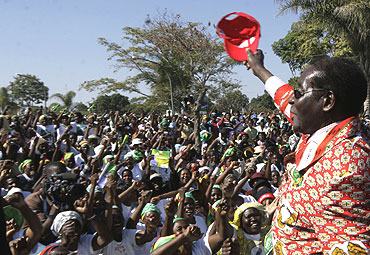 Over 40 years ago, as Africa commenced the long  and arduous process of decolonisation, one of its foremost liberationist thinkers issued a prophetic warning. Frantz Fanon, himself a freedom fighter, wrote that the national leader in the postcolonial era should not 'fall back into the past and become drunk on the remembrance of the epoch leading up to independence.' His powerful descriptions of a once effective leader who gradually  secedes from reality and betrays the people who entrust him with their future has resonances for the tragic situation in which Zimbabwe finds itself today. Having reduced a once significant anti-colonialism to a self-serving dogma, Robert Mugabe is the kind of fallen leader Fanon cautioned Africa against. Hesitant African leaders who are being called upon to intervene might want to reread his classic essay,  ‘The Pitfalls of National Consciousness’ from that classic liberationist text, The Wretched of the Earth.

As Zimbabwe spirals into further political chaos, Mugabe and his party’s addiction to power will further indulge an equally self-serving Western appetite for spectacles of Third World despotism. If Mugabe finds it convenient to invoke the demon of  colonial oppression (which many Zimbabweans, barely thirty years out of colonial rule, remember all too well), he also enables British politicians to spout  pieties condemning violence while their own nation is currently implicated in two dubious and bloody wars. Were the BBC and Channel 4 to show as many close-ups of injured and dead Iraqis as they do of Mugabe’s maimed victims, criticism of violence against innocents might be somewhat more evenly distributed than it currently is. The British government turns accusatory fingers in Zimbabwe’s direction while Mugabe shouts back anti-colonial slogans. It is a perfect symbiosis, a mutually convenient embrace of denunciation, with each party laying claim to the higher moral ground. The only innocents, however, are ordinary Zimbabweans.

Both Mugabe and Britain are guilty of avoiding historical truths in favour of a skewed story which legitimates their own position. Britain’s persistent  refusal to acknowledge its own colonial legacies is contradictory. It reneged on its commitments to the land reform programme claiming, in Claire Short’s words, that there were no 'links to former colonial interests'  while nevertheless concerning itself with the fate of the white farmers who represent these interests.  Alongside an extremely selective use of human rights discourse, such contradictions mean that Mugabe's denunciations have some truth to them even if their main purpose is to detract from the ruling elite’s own depravities. While Africa is ostensibly central to Britain’s international development agenda, the emphasis has always been on the paternalism of aid rather than acknowledging and making reparations for the economic devastation wrought by colonialism. Rarely do condemnations of land seizure, violence and intimidation extend back to the time Matabeleland came under British rule. This too was accompanied by the seizure of vast swathes of fertile land by a handful of British farmers while large numbers of Ndebele and Shona people were killed or forced into labour. Brutal modern regimes in that part of the globe didn’t begin with Mugabe.

Mugabe,  meanwhile, should also reacquaint himself with the original aims of anti-colonialism and the people’s expectations of the liberation struggle in Zimbabwe. Having resisted the anti-poor agendas of international monetary institutions and initiated necessary land reforms, the Zimbabwean leader has also refused all responsibility for those many failures of his rule not reducible solely to the colonial past. A once dynamic band of freedom fighters have degenerated into a party who brandish their liberationist laurels while they subjugate, starve and brutalize an entire population in the name of anti-colonialism. The sanctions imposed by the West have, as they usually do in such cases, strengthened Mugabe’s brutish hold on power and further harmed the vulnerable.

Real anti-colonialists like Fanon and Gandhi both insisted that that freedom was not about replacing the white tyrant with the brown or black one. Mugabe is the exemplary cautionary tale here, a freedom fighter who has essentially recolonised his people. Indeed, the very techniques of suppression and intimidation deployed by the Zimbabwean leader, a knight of the British Empire until yesterday, were taught to him by the colonial masters he professes to despise. Censorship, brutal suppression of resistance and the dismissal of any form of criticism as seditious were all part of the colonial arsenal. Quick to claim credit for spreading parliamentary democracy, Britain is less forthcoming about acknowledging the legacy of authoritarian rule also left behind by its empire..

Frantz Fanon died young, but one can imagine what he might have to say to his fellow former liberationist: Mr Mugabe, it is time for you to return the power which the Zimbabwean people once vested in you but which they now legitimately wish to reclaim. Liberate them from the tyranny of the rule you have exercised for too long and without a continuing mandate. Your actions weaken all of us who hold the accomplishments of liberation dear and only strengthen the hypocrisies of former colonial powers. The great tradition of African anti-colonialism to which you constantly refer has never  been about blaming the coloniser alone; it has always taken account of the culpability and responsibilities of African leaders and elites.

As for those in Britain, it is time for the 'proper analysis' some commentators have called for, one which would include honest reflections on the imperial legacy rather than 'shutting up' because of colonial guilt. It is the only way to deprive Mugabe of his main moral weapon. This is not just about the kind of simple-minded 'balance' which the BBC generally advocates (though it has long since abandoned that value with regard to Zimbabwe), but also an informed sense of how history shapes the present. Failing this, Zimbabwe and the rest of us are destined to asphyxiate ourselves in what Fanon aptly termed 'the tragic lie' of the aftermath of colonialism.

A shorter version of this piece appears in the Guardian today

Is China Doing A Myanmar In Sri Lanka?