The simultaneous rioting over Chinese-controlled Tibet and a presidential election in Chinese-claimed Taiwan may inadvertently have thrown a spotlight on a new era of international diplomacy... 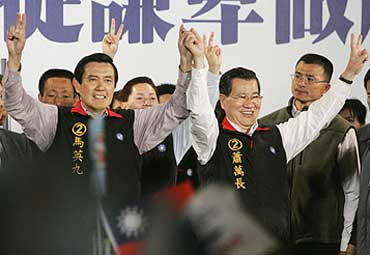 The simultaneous rioting over Chinese-controlled Tibet and a presidential election in Chinese-claimed Taiwan may inadvertently have thrown a spotlight on a new era of international diplomacy--one tempered not by strategic balance or competing moral values, but by demands of the global supply chain.

Both Tibet and Taiwan have long been tipping points on which China threatens to abandon its nation-building focus on the economy and lash out regardless.

For the West, too, these have been deeply ideological problems: Tibet represents religious and cultural oppression; Taiwan is evidence that a developing society can move peacefully from dictatorship to democracy and thrive.


China's size, its economic clout and permanent seat on the UN Security Council have made Western governments more circumspect when championing both issues. Most recognize China's suzerainty, or de-facto sovereignty, over Tibet and most refuse to recognize Taiwan's de jure independence, thus blocking Taiwan's entry into many international organizations, such as the United Nations.

Over the past decade, however, China's integration and growing influence within the global economy has given diplomacy and roads to peace or conflict a new, untested set of benchmarks.

A previous Tibetan uprising in March 1989 saw martial law and troops firing on demonstrators, followed in June that year by the Tiananmen Square killings that led to condemnation of China. Almost 20 years on, China's immediate national interest lies in hosting a smooth Olympics in August. Despite widespread abhorrence over how China controls its citizens, there's no appetite for a wholesale Olympic boycott, while China argues that deployment of armored columns in Tibet are no worse than the West's daily military digest in Iraq.

In 1996, Taiwan's first presidential election prompted China to carry out military exercises on its eastern seaboard, prompting the US to send two carrier groups to patrol the Taiwan Straits. Twelve years on, in a diplomatic somersault of sheer real-politik,


Washington sides with Beijing to rein in Taiwan's aspirations of international recognition. The recent March 22 presidential election included a referendum calling on Taiwan to apply to join the UN--a move that a decade ago would have seen covers coming off China's coastal artillery batteries. Instead, China left it to the US to warn off Taiwanese voters by describing the referendum as "provocative" and risking stability in East Asia.

The referendum failed. The opposition Kuomintang's Ma Ying-jeou won a resounding victory on policies favoring closer ties with China. The immediate upshot: a 4 percent rise in the stock market and the Taiwanese currency reaching a 10-year high against the US dollar.

After decades as a flashpoint for war, the Taiwan-China conflict is, in effect, no more. High-level conferences did not bring peace. Nor has one side battered the other into submission. Time, pragmatism and compromise produced a win-win formula that could serve as an example elsewhere--the Middle East, the Balkans, Tibet. It's already being replicated between the US and China.

China and Taiwan have each become so irreplaceable to the global supply chain that the benefits of the status quo, coupled with increased living standards, far outweigh those of causing trouble.

The information-technology sector alone gives an idea of how easily a China-Taiwan conflict could paralyze world consumer markets.

Between them, China and Taiwan control much of the computer internet market. According to J.C. Liao, chief executive officer of the hi-tech Taiwanese multinational D-Link, more than 80 percent of personal computers, laptops, wireless routers and data cards rely on the two nations.

"Routers are about 85 percent of the global market," he says. "Wireless LAN (Local Area Network) is about 90 percent. Ninety-five per cent of our manufacturing is done in China, but the key design components come from Taiwan and the United States."


On a wider scale, economic links between China and Taiwan continue to grow. More than 50,000 Taiwanese companies operate in China. Taiwanese overall investment there is at least US$150 billion--with more from Taiwanese-owned offshore companies. China-Taiwan annual trade is more than US$100 billion dollars, and products of this alliance involve supply chains from dozens of other countries, from Israel to Brazil.

Add China's reliance on exports to the US along with its holding billions of dollars of US debt, and the scenario of all this suddenly unraveling becomes unthinkable--conjuring up a Cold War comparison of a mutually assured destruction through economic instead of nuclear strikes. The difference is that bankers and economists, not generals, call the shots.

In recent years this economic reality has increasingly loomed over Chinese and US policymaking, paving the way for a permanent peace. "Beijing made a decision in the summer of 2002 that the economic development of China was more important than the unification of the motherland," explained Chong-Pin Lin, of the Foundation for International and Cross-Strait Studies. "And that was inter-related to another principle of placing cooperation with Washington higher than conflict with Washington."

China's latest anti-secession law, passed in 2005, includes more obstacles to a cross-straits conflict than before. While re-affirming its claim to Taiwan, the legislation states that any military action must be approved not only by the Central Military Commission, but also by the civilian State Council.

For its part, the US, since 2003, has taken the side of China whenever Taiwan makes rumbling noises on the issue of independence. The US inconsistency on the issue of its global democratic mission and simultaneous warning to Taiwanese voters not to upset the Chinese apple cart is another example of the changing paradigm. As the international affairs spokesman for Taiwan's defeated Democratic Progressive Party, Bi-Khim Hsiao, notes: "America is praising the people of Iraq for going to the polls yet at the same time condemning us for having a vote to express our desire to be part of the international community."

Her argument about cherry-picking democratic credentials and sovereign rights becomes more poignant when taking into account US recognition of Kosovo's independence despite Russia's objection and US refusal to recognize the 2006 election victory of the Islamic militant group Hamas.

The US could eliminate its inconsistencies by using the very model that it fostered--China-Taiwan supply-chain diplomacy--to motivate other conflict zones towards peace.

One crucial marker is the link between economic performance and political maturity. According to the Taiwan Institute of Economic Research, it was only possible to begin dismantling Taiwan's dictatorship in the mid-1980s when the per capita GDP had reached US$5,000. The institute's president, David S. Hong, suggests that China will not be ready for such a transformation until per capita GDP reaches US$15,000, perhaps more than a generation from now. At present the GDP is about US$2,000 against Taiwan's US$17,000.

Both the Chinese government and Tibetan activists could learn from the Taiwan example. At present, decades of Chinese investment and economic growth in Tibet have had scant effect on Tibetan subjects who cling to their culture and religion even if that means less material improvement. China, too, remains determined to preserve its control over Tibet no matter what the economic cost may be. It's a lose-lose situation.

Tibet is straddled between India and China, the two economic giants of the 21st century and perfectly placed to become an integral member of the global supply chain. For that to happen, though, Tibetan activists must stop attacking Chinese businesses. Chinese security forces must give space to Tibetan culture and expression. Both sides could then begin to trust each other and work together to create a Taiwan-style success story instead of a lingering victim with an unjust past.

Humphrey Hawksley's reports from Taiwan can be seen on the BBC. His latest book Security Breach is due out in August 2008. Rights: © 2008 Yale Center for the Study of Globalization: YaleGlobal Online