'The Siege Of The Mind'

The author of In Times of Siege on its contemporary theme, its relevance, inspiration and how a 'writerly slogan' is necessarily nuanced, complex, structured, and does not remain on the street or even in the living room of the house. 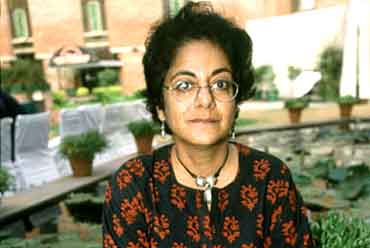 Githa Hariharan’s latest offering In Times of Siege is a stark story of a history professor whose warts-and-all portrayal of the 12th century Basavanna earns the wrath of self-appointed protectors of history. The contemporary relevance is obvious and the book reflects the claustrophobic sense of oppression as ordinary lives are besieged by all-pervasive hatred.  Hariharan talks here to Vaishna Roy about her book’s attempt to tackle our own times of siege.

Has fundamentalism been reduced to just an ‘obvious’ plot line?

When we have to identify and grapple with an enemy I don’t think you can stop in the middle of the grappling and say ‘is this subtle enough?’ or ‘Is my view of the enemy complex enough?’ You just grapple. And that’s what the novel is doing.

The world in In Times of Siege is all too real. How difficult was it not to be able to escape into a world of imagination; where you could find your own solutions?

As a writer, because I have in my earlier novels used invented landscapes and magic and so on, to look at very real things or problems of real men and women it was a temptation (to look into imagination). But I was absolutely determined that I would have a hard-hitting, straightforward narrative strategy.

How afraid are you really of Hindu fundamentalism, about it growing out of hand?

I don’t know that I would use the word ‘afraid’. I think that we need as many warnings as possible, in all kinds of ways possible. Whether it is through art or literature, or journalism or in the classroom or courtroom. To say that any kind of prejudice, bigotry, warspeak, fundamentalism, obscurantism is going to diminish our lives, impoverish our lives. And this applies to a range of fundamentalism, whether Hindu, Christian, Muslim…

You have said earlier that writing this book was like ‘shouting a slogan’. How effective are slogans against real problems?

That’s why I said a ‘writerly’ slogan. Which is not to belittle the kind of slogans shouted on the streets. That does one sort of thing. Everything can’t be solved on the streets. Similarly, everything can’t be solved in the courtroom. Every monster has to be taken on in a variety of settings -- classrooms, homes, books, literature, Parliament. But a writerly slogan is necessarily nuanced, complex, structured, and most of all it does not remain on the street or even in the living room of the house. It goes to the most personal part of an ordinary life. Whether in a workplace or in the bedroom or into the mind.

So the state of siege I am talking of - of course there is a typical siege and all the kind of problems we know only too well whether it’s mobs or violence or hatred or murder, or Gujarat or so on. But there is the siege of the mind as well. So, the siege in the mind that the novel is actually shouting a slogan about is this: That if even in a university minds are not safe against fundamentalism -- just as we say that even Ehsan Jaffrey and others were not safe in Gujarat -- then that’s a measure of how horribly unsafe the ordinary mortal is.

How did you feel when Modi came back to power in Gujarat?

Deeply depressed. Deeply frustrated. I think this is going to be a long haul. We cannot be carried away by romantic woolly-headed notions of how neatly the Modis of the world will be got rid of with one election. It would have been wonderful but they won’t. Because there is a whole history there. Gujarat has been worked on for long enough and while the voices of dissent are necessarily patchy, there are lots of different voices. We are celebrating the differences and coming together and saying that you cannot have this sort of thing. So it’s going to be difficult but I think it is happening in a modest way and will continue to happen.

In that sense, fundamentalism cannot ever have a neat solution, right?

Most of us, as we’re growing up, without our awareness, we pick up a little baggage of prejudice, most of it received wisdom. But as you grow, as you are exposed to different ideas, meet people, as you read, learn, as you live, experience teaches you that some of those prejudices are false. So what is the answer? The answer is to get to know each other better. The answer is to fight prejudice at all levels, certainly starting with the youngest minds.

Rewriting history has always been the prerogative of the victors in any war. What’s really so surprising about a resurgent Hindu nationalist movement wanting to rewrite or colour history?

You are absolutely right. Whoever is in power wants to put out a kind of authorised version. In our Indian case… you have people saying the Left has also put in its historians in cartels and universities and so on. But I must counter that with a question of my own.

As you know, the British imperialists did their own spot of rewriting our history, but they were hardly challenged. Is our intelligentsia now more on its guard against this sort of fictionalisation of history?

How influenced were you by Coetzee’s Disgrace while writing this book?

I don’t know about influence. When you are writing a book, you’re aware of your ancestors, your riches in the bank deposit of whatever you’ve read and admired, and Coetzee is a writer whose work I admire very much. But I think if I spoke in terms of a kind of link because I admire the work, it would be as true of The Age of Iron as of Disgrace. And finally like all writers I am indebted to the writers I admire. And the mythical reader in my head is a composite of myself and people whose ideas or work I admire.

You fought and changed the guardianship law. Any other gauntlet you are picking up?

(laughs) You summon up this very comfortable image of, you know, a pleasant walk between gauntlets but… I lead several lives simultaneously. It’s not as if before the guardianship case, I was not deeply committed to various issues. It’s only because I took up the guardianship case after I became a published author that, well… ‘activism’ got dated from then on. But I must insist that I was a citizen and woman first and then a writer in the chronological scheme of things!

Where are you looking to for your next book?

I think that - having moved to this new sort of arena as a writer, this direct, no-holds-barred kind of approach and speech -- I think I am going to remain there for a while. I always have tackled social issues but will now take it on more directly, tackle them head on.