The stink, the uprooted bamboos, the vegetable peels — all that is left behind once the prayers are said and the festival draws to an end 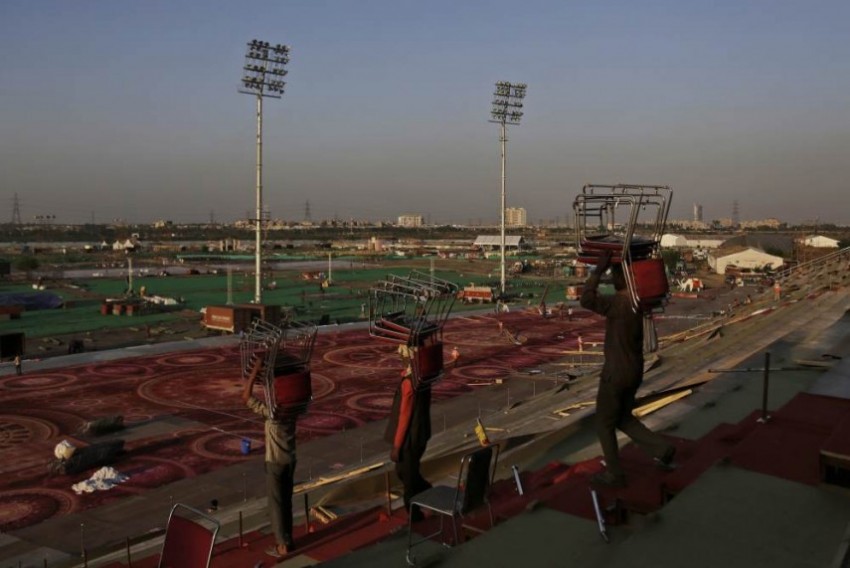 Workers carry chairs as they dismantle stadia temporarily erected for massive three-day cultural festival organized by the Art of Living Foundation on the banks of the river Yamuna.
AP Photo/Altaf Qadri
Anjana Basu March 15, 2016 00:00 IST The Residue Of Faith 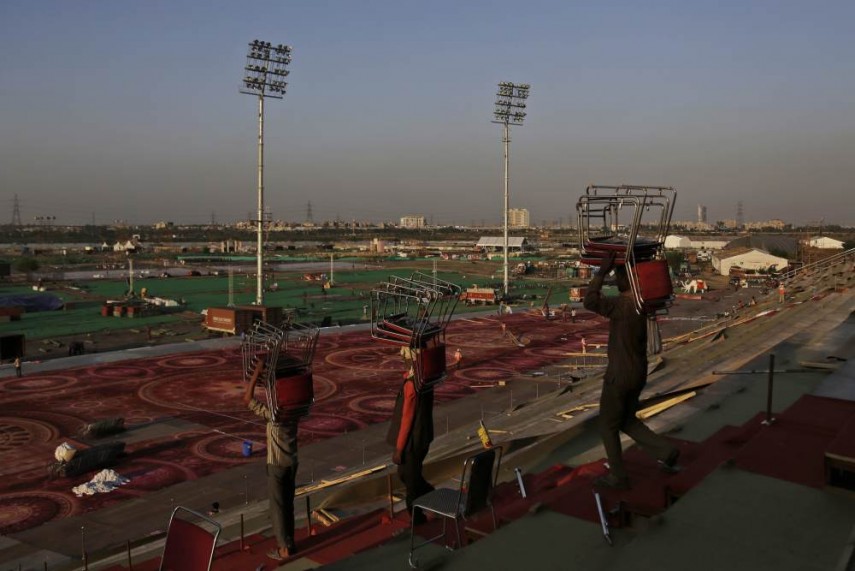 Three days after the puja the road is lined with white powder, bleach to get rid of the stink of cooking pots, onions and potato peel. The smell still lingers despite the generous scattering that makes the pavement outside my door look like it has been snowed on. Bamboos lie uprooted in piles, red plastic chairs heaped on more red plastic and the hammered light panels and twists of multi-coloured wire waiting for someone to remember them. This evening there is no aarti or collection for bhog, Rs 101 for a papad and bhog, the auspicious amount to be stuffed into the black box waiting to receive it.

The white grilled temple came from nowhere to decorate the corner of the pavement on the main road. It started as a Saturn temple. Shani Maharaj bright red and propitiated on Saturdays, then there was competition, Shiva and side by side with him Tara Ma who rose to heights of beatification. It was started of course by the hawkers who added those inevitable elements of faith, the box for donations and a bell ringing priest in the evenings surrounded by whirling clouds of incense.

On the nights of no moon vast cauldrons materialized outside my front door blocking the gate — though there were promises to move aside when required, especially if the car had to be taken out of the alleyway for an office run. The cauldrons were for khichri bhog accompanied by patches of water and an indescribable aroma.

Every January just before the sun sailed into makar sankranti, Tara Ma's devotions reached a fervent new pitch — an annual celebration. I calculated that it depended on how much funds the hawkers had accumulated from the donations.

The bell rang and I opened the door to a rush of hawkers. They had come to announce that they were holding a blood donation camp in the gully as part of their celebrations. That did not really register. They added that they were going to build a 'false ceiling' for the blood donation camp which turned out to mean a shamiana — at that point mysteriously, our phone line was cut, or perhaps not so mysteriously since it was a crow's nest of wires outside our door.

A façade went up in the best Durga Puja style framing the original mandir. Lights twinkled all the way down to Dover Road. Mics squawked and music boomed — though to be fair the noise pollution abruptly stopped at 10 30 and a lot of it was drumming.

Blood donation camps seemed to be the political cause celebre. They were periodically springing up — there was one for women's empowerment on Hazra. However what worried me was the one outside my front door. My father and grandfather had worked with blood and there had been a laboratory for blood testing on the ground floor. This however was going to be blood collection cheek by jowl with the potato peelings dropping into the drain and feet coming and going, not to mention thermocol plates.

My hawker brothers assured me it was a good cause. I told them it needed to be done in an enclosed sterile environment and the blood had to be tested before being dumped on an unwary blood bank. One of them listened, the rest shrugged. I told them I would record it on my phone and send them to the Municipal Commissioner who would sympathise and advise me not to ruffle a vote bank's feathers.

They spread mats on the road and laid out charpoys. A woman materialized with a briefcase and stethoscope. The eager bhog eaters became eager blood donors without a thought, sticking out their arms and going away rewarded with scarlet mishti boxes instead of the regulation boiled egg and banana. I imagined my grandfather's ghost grumbling somewhere.

All it needed was a shout of 'Jai Ma Tara!'

Fixing Cradles In The Sky