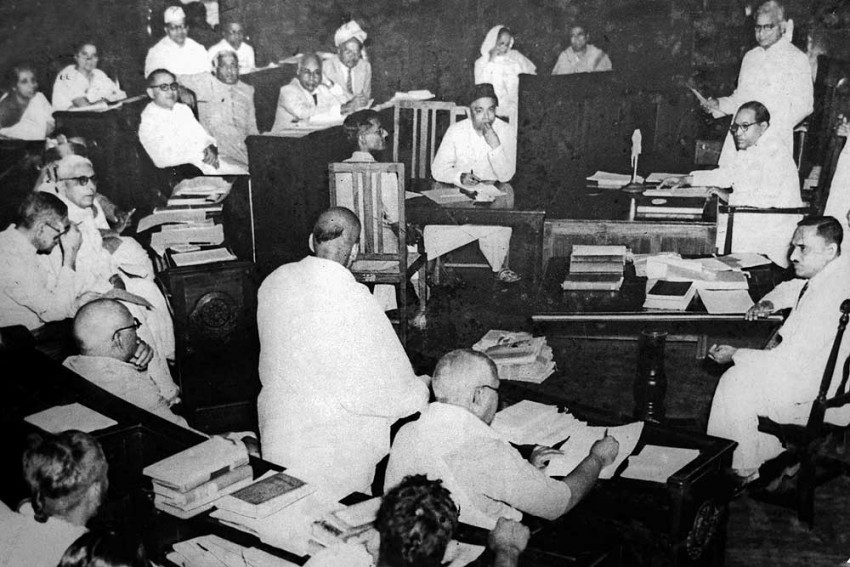 Political icons are easily appropriated. This is more so the case for figures who have such widespread, almost universal resonance, that their mere invocation can bestow some level of acceptability. For some time now, and over the last two years in particular, a noticeable feature of the BJP's political rhetoric has been its appropriation of political figures whose views would sit uncomfortably with those of its own.

The most recent example of this was the adulation Ambedkar received on his birth anniversary. Of course, other political parties similarly tried to claim to be Ambedkar's political inheritors but what is interesting is that the BJP and indeed the RSS are more audibly and visibly concerned with invoking figures, other than their own ideological progenitors.

This tussle over the appropriation of national figures from pre-independence India is not restricted to Ambedkar. Bhagat Singh is also co-opted by an entire spectrum of politicians and civil society organisations in which he is portrayed as everything from a devout Sikh, to a militant Hindu nationalist, to a socialist revolutionary.

Similarly Gandhi's legacy is also laid claim to even by those who historically have been fundamentally opposed to him. It is worth recalling that not only did Narendra Modi identify himself as a Hindu Nationalist by invoking Gandhi but indeed BJP member Vijay Goel compared Modi to Gandhi. The BJP has time and again used innocuous quotes by Gandhi, at best to appropriate him and at worst to emasculate him. This happens despite the fact that the RSS, the BJP's ideological progenitor, has always borne a deep antipathy towards Gandhi and his politics.

This process of cooption is not restricted to individuals in the recent history of India but indeed someone like Maharana Pratap of Mewar is recast as a shining example of a Hindu king protecting India. The inconvenient facts that his 'senapati,' Hakim Khan Suri, was an Afghan pathan and Emperor Akbar's 'sipahsalaar' was Raja Man Singh of Jaipur are of course ignored.

An important question that therefore arises is about why the BJP specifically, and the various organisations affiliated to it in general, seem to be adamant on co-opting and appropriating the legacies of those figures who, while they were still alive, were not only vigorously opposed by the ideological forbears of the BJP but in some instances were even its victims. Gandhi's assassination was a case in point and so the contradiction of trying to co-opt Gandhi into the same pantheon as V D Savarkar, creator of the term Hindutva and one of the main interlocutors against whom Gandhi writes in Hind Swaraj, is strange to say the least. Ambedkar, like Gandhi, criticised Savarkar's ideas of nationalism in his book entitled Thoughts on Pakistan, which is often cherry-picked for quotes in order to somehow prove that Ambedkar was anti-Muslim.

Perhaps one of the most obvious answers lies in the fact that popular mass politics is not possible without invoking figures that have left an indelible imprint on India's political landscape. Here it must be underscored that while the BJP is tripping over itself to claim Ambedkar, Bhagat Singh and Gandhi as their own, no other political parties or organisations are even invoking, let alone co-opting, those dear to the BJP such as Savarkar, Gowalkar, Hegdewar or Deen Dayal Upadhayaya amongst many others. In fact most these proponents of an exclusionary nationalism based on religion were fundamentally opposed to Gandhi. Indeed most of them saw him as responsible for the emasculation and impotency of India. Gowalkar saw Gandhi's call for Hindu-Muslim unity as 'treason' and Upadhyaya called for Gandhi to stop being called 'the father of the nation.'

It seems that the BJP is almost compelled to try and co-opt figures like Bhagat Singh, Gandhi and Ambedkar into their pantheon because their own ideological progenitor's roles in the independence movement was negligible and indeed at times was characterised by collaboration with the colonial powers. There were of course a number of people in the Congress Party whose views resonated more with the Hindu Mahasabha and Jan Sangh and this desire to accommodate people from across the political spectrum has always proved to be the Congress' Achilles heel. However, most of these figures were not subsequently seen as inextricably linked to the project of the constitution as a whole and their names certainly do not resonate with today's electorate. The Jan Sangh was quickly taken over by the RSS after the death of its founder S. P. Mookerjee, incidentally a member of Nehru's cabinet, and one its popular and divisive slogans was 'Hindi, Hindu, Hindustan.'

It is evident then that in the absence of any substantial role in the freedom movement and in the creation of the constitution, today the BJP cannot but try to co-opt the two figures who are inextricably linked to both these periods: Gandhi and Ambedkar. Without appropriating them the BJP will be unable to draw any connection between itself and figures who are pivotal to understanding the nature of politics, of the constitution and therefore the Indian nation-state.

The fact is that Savarkar and Gowalkar's articulation of the idea of India is anathema, indeed diametrically opposed, to the constitution as it stands today. Thus, the BJP's cooption of icons such as Bhagat Singh, Ambedkar, Gandhi and others is proof of the inherently unviable politics that it espouses because it tries to hide its reality beneath the veneer of universal acceptability. In a way this represents a kind of schizophrenia on the part of the BJP because not only does it seek ideological succor elsewhere, however superficial, but indeed tries to bring together figures who themselves were ideologically opposed to each other.

Gandhi and Ambedkar's disagreements are well known and so is Gandhi's criticism of Bhagat Singh. Ironically, perhaps the only thing that these figures might have seen eye to eye on was their opposition to any kind of exclusionary and chauvinist nationalism. Perhaps this politics of appropriation is an indication that the BJP is realising, consciously or unconsciously, the fundamental unviability of an idea of India based on religious exclusion and chauvinism.

Ali Khan Mahmudabad an assistant professor at Ashoka University where he teaches history and political science.

'Get Ready For More Droughts'