So he said he was setting out to do, but in the end he had them eating out of his hand when he said he is "opposed to fundamentalism of all kinds, Left or Right" as he matter-of-factly went about answering questions without any notes or slips being 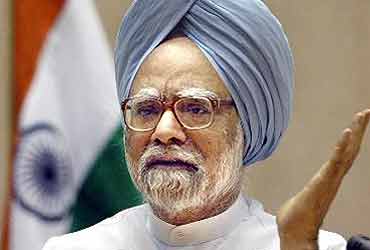 On the recent Savarkar controversy
Aiyar's statements are his personal views and not of the government...it is an unnecessary controversy. Savarkar was a freedom fighter and a patriot, but there were some aspects of his life which have created controversies. He was also associated with the ideology of Hindutva with which all of us do not agree. He also was an accused in the Gandhi assassination case but was acquitted. History, however, gives us the luxury of interpreting events in different ways, but I do not think any any good is achieved by speaking ill of the dead.

On "de-toxification" of education
Our focus is on de-politicisation of institutions by giving them maximum autonomy to manage their concerns. But certain distortions were introduced in the last five or six years. These needed to be corrected. I'm opposed to fundamentalism of all kinds, whether from the Left or Right. Our education policies should motivate all the sectors to give their very best in terms of professionalism and should not be a prisoner of any ideology or excessive dominance of bureaucracy.

On Vajpayee asking the government to take steps to break the parliamentary deadlock
The proof of the pudding is in the eating. I met Mr Vajpayee as part our efforts to consult political parties before Indo-Pak talks. As for the wider issue of what happens in Parliament, the Speaker has convened a meeting to discuss the issue.

On being "rude"
The impression that we are not amenable to reason or discussion is not correct. The specific incident is a closed chapter and I don't want to dwell on it.

On Indo-Pak dialogue
The dialogue can move forward only if terrorism is under control. We continue to be concerned about infiltration. We continue to believe that for the process of reconciliation to move forward, there must be an honest effort on the part of all concerned to implement what was promised in the January six, 2004 statement.

Our approach to talks will be based on realism and the belief that the people of South Asia are bound together by a shared destiny. It is not my nature to promise a false dawn but I do believe in the ancient saying that a road is made by walking step by step.

My agenda (for his proposed meeting with Musharraf) would be to normalise and expand the multifaceted relations between the two countries. We do not buy the argument that it (Kashmir) is the only issue affecting relations between India and Pakistan.

On Indian nuclear doctrine
Let me say we are a nuclear weapon state and we accept all that goes with it. I think also that it is our view that the no first use posture is the right posture to be adopted by a country like ours.

On ties with US, Russia, China
We will continue to strengthen strategic and political equations with the United States and the Russian Federation. Foreign Secretary Shyam Saran will be visiting Washington in the coming fortnight for final negotiations on the subject, this will enable closer bilateral cooperation in the areas of science and technology and space exploration. We shall move forward on resolving the boundary issue with China and fashion a stable cooperative relationship with that country.

On the Security Council seat
It is a legitimate aspiration that India's interests and concerns cannot be ignored for any reforms in the United Nations system. With a collective strength of a hundred million people India cannot be ignored. A new international order has to take into account the interests of countries like India and Brazil.

On tainted ministers
If the law allows people of criminal antecedents to get elected and to expect these persons not to be made ministers, I think there is some inconsistency there. The time has come for all political parties to sit together to agree on electoral reforms to ensure that tainted persons of all shades of opinion do not get elected to Parliament. It is only this way we can ensure that criminalisation of politics and persons of corrupt practices do not enter legislatures and impact on the processes. We cannot allow tainted persons to sit in judgment over the processes in Parliament and legislatures.

Code of conduct for MPs
All political parities must sit together and work out a new code of conduct for MPs in Parliament. During the just concluded Budget Session of Parliament, I had expressed deep regret and concern on the floor of both the Houses over the manner in which important bills were passed without being subjected to Parliamentary scrutiny.

Water gives rise to emotions. Whatever we do has to be done keeping in mind its sensitivity. The Punjab legislation annulling all water agreements and the subsequent developments showed that the centre was concerned as it had promptly approached the Supreme Court requesting it to test the legality of the law. When the court gives its opinion, corrective steps will be taken.

The Armed Forces Special Power Act was enforced in Manipur by an explicit decision of the Government of Manipur and hence they have a right to modify their decision.

On the creation of Telengana
We are committed to the establishment of a separate Telengana state. What we need is to have consultation with all concerned.

On whether Sonia is 'super PM'
There is no foundation for such a statement. Sonia Gandhi is the chairperson of UPA and she is also the Congress president. She has every right to know what goes on in the government. The insinuation that there are two centres of power is not true.

On being the PM
It is a great honour and privilege to be entrusted with this onerous responsibility. Of course I was not an aspirant for the post but having been in office for over 100 days I consider it as an honour, challenge and opportunity.

On spin doctors
I am not not aware of what the spin doctors are doing for my image building  and you cannot blame me for all this.

On whether the government would last its full term
I believe our government is going to last for full five years. Let there be no doubt or ambiguity about it. The misconception that I can be pressured to give in is simply not going to materialise.

On POTA
We will bring an ordinance to repeal POTA  in consonance with the UPA's promise made in the National Common Minimum Programme.

On reservation for women
We are committed to legislate that one-third of seats in Lok Sabha and State assemblies are reserved for women.

On inflation
We shall take firm measures to check inflation without hurting the growth process. Inflation is a matter of concern. It is partly due to overhang of excess liquidity which was building over last two years. But I assure you that despite increasing world oil prices, delayed arrival of monsoon and avoidable disruptions caused by such actions as the truckers strike, we shall be able to control inflationary pressures. Investments are buoyant, non-food credit has gone up. Exports growth is much better. Industrial growth has been better than previous years.

On FDI and the Left
I admit that there are some complications. I hope we can persuade the Left. We are engaged in a constructive dialogue. We will have a conclusion which is a forward looking one.  Since 1991 no government has been able to achieve the targets for FDI. There is no change in attitude on FDI...This country needs large doses of FDI.

On disinvestment
There is no ideological aversion to disinvestment and there is enough scope for it but the government would not allow the change of character of profit-making PSUs in the process from public to private.

On employment
Employment generation is a high priority area for the government, an expanded version of food- for-work programme would be announced in next 1-2 months.

Development strategy for 7-8 per cent growth should be labour and agriculture-oriented to provide more job opportunities, and the government is committed to create congenial atmosphere for employment growth.

On reservations
The private sector needs to enlarge employment opportunities for disadvantaged sections of the society. The newly constituted Group of Ministers will have a dialogue with the private sector to find out what is possible without legislation.

Modalities for enhancing opportunities for SCs, STs and OBCs in private sector need to be worked out in close consultation and cooperation with the private sector.

More attention will have to be paid to education and health as part of mid-term correction. This does not mean that we have given up on the reforms. We will stay on course as committed in the NCMP.

On agriculture
In the next three years, farm credit will be doubled. Wherever farmers have problems in returning loans, rescheduling arrangement will be made. Problems have existed for a long time. It is wrong to say that nothing has been done but it problems cannot be resolved in a short time. Our effort is to provide maximum benefit to the farmers. The focus will be on upgrading the irrigation facilities and increasing farm credit by 30 per cent this fiscal.

On growth
There is no evidence to believe that there is deceleration in growth... Industrial growth (so far this fiscal) has been higher than previous year, investment is buoyant, non-food credit growth is higher and export growth is better than last year The short term economic scenario worked out in a manner, which we would not like to go for.

The Common Minimum Programme has committed the government to a reform path to take care of those sections which were so far deprived of the benefits of the reforms. Deliberately, we have to do a mid course correction but that does not mean we have given up reforms. We will stay on our course. The entire reform process would be carried out after taking into account the views of the coalition partners.

'We Want India To Shine, And Shine For All'