The Light Shall Shine On

A writer is a light that never goes out and continues to illumine. Bhisham Sahni lived just as such a writer and despite passing away on 11 July, he will continue to shine on. 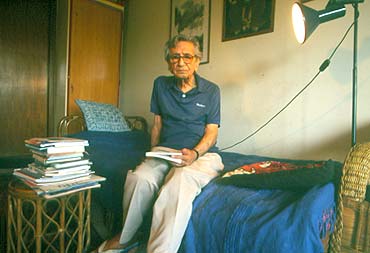 Bhisham Sahni's name is etched so deeply into the twentieth century of Hindi literature that it cannot be erased. With Independence and till the 11th. July, 2003, this name has been synonymous with Hindi story and play writing. Bhisham Sahni had gained such an unmatched popularity that all kinds of readers awaited his new creations and each and every word of his was read. There was no need to ask a general reader if he had read this or that writing by Bhisham. It was possible to begin a sudden discussion on his stories or novels. Such a rare readerly privilege was either available to Premchand or, after Harishankar Parsai, to Bhisham Sahni. This too is rare that the fame he received from Hindi should, during his lifetime,  become the fame for Hindi itself. Which other writer has been so bestowed with such a rare privilege? A timeless writer like Bhisham does not need a formal tribute because the reverential accolades received by his work have made it into an eternal heritage for modern Hindi literature.

From the point of view of vocabulary, language and thought, Bhisham Sahni was an inheritor and modern caretaker of the Hindi tradition begun by Amir Khusro in the 13th century. Bhisham Sahni's life and writing answer all those pointless questions that are raised by self-proclaimed litterateurs who bemoan lack of readership in Hindi. Bhisham Sahni was secular. He was committed. He was a Marxist. He was a member of the Communist Party. He was a supporter and organiser of literary movements and a patron of Progressive Writers Union. He was not merely a professed communist, but also an active participant and worker. He not only participated in popular movements but, carrying the flag of the proletariat, also led them,  In addition to all this, considered almost forbidden for creative people, he created timeless classics. He wrote stories, novels and plays. His creative world is very developed, but it is a world not of the heroes, but ordinary people. He took ordinary life, conditions and characters the ordinary people to create such deep and extraordinary creations that they remain engraved on Hindi psyche as milestones of compassion.

Bhisham was born in Rawalpindi in 1915. The pre-independence Punjab of that time was an ideal example of a composite culture. The psychological and ideological environment created by Guru Nanak and Sufi saints based on the great values of religious harmony, tolerance and co-existence provided the life-breath for Bhisham Sahni's work. He was active in the ‘Quit India’ movement of 1942. He was then not just a member of the Congress but also the secretary of the Rawalpindi District Congress. With Independence came Partition, and the deadly dance of murder, brutality and barbaric communalism which was witnessed by Bhisham, and, the agony caused by this inhuman experience, is what made him write a great novel such as Tamas..

Although Bhisham had been writing stories for a long time, he received recognition as a storywriter only after his story Chief Ki  Daawat [The Chief’s Party] that was published in the Kahani [Story] magazine in 1956. That was a stormy phase of the ‘nai kahanii’ movement and writing when thinking and concept of story-writing were changing. Along with Bhisham, writers such as Mohan Rakesh and Krishna Sobti reflected the pain and cruelty of Partition, churning the vast bloody ocean of hatred, violence and enmity to bring out the eternal values of compassion and communal harmony.

On the creative horizon at that time, established writers such as Yashpal, Manto, Amrita Pritam, Kartar Singh Duggal, Uprendranath Ashk were present with their deep experience of Partition, but it was Bhisham Sahni with his simple narrative structures whose sensitivity would soon filter out through literary debates to became a credible experience for ordinary readers. The novel Tamas and unforgettable story collections such as Amritsar Aa Gaya Hai [We have reached Amritsar] are a testimony to how the ideological insights borne out of his association with the leftist movement got transformed in the process of creation into literary heritage. 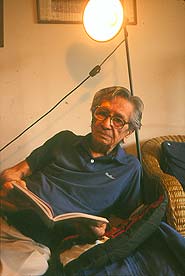 Bhisham was associated with IPTA because of his elder brother Balraj Sahni. He was a trained actor too. Bhisham and his wife Sheela acted with Kaifi Azmi's wife Shaukat Azmi  in the play Bhootgadi, directed by Balraj Sahni for IPTA. And of course, he acted in Tamas too. After Banne Bhai (Sajjad Zaheer), it was Bhisham who steered the Progressive Writers Union. He was also active with Faiz Ahmed Faiz in the Afro-Asian Writers Federation and edited its journal, Lotus which was published from Cairo. He used to teach English in Delhi's Zakir Hussien College, but went to the Soviet Union  as a translator to bridge the divide between literature and translation. He stayed there for eight years and translated Tolstoy and some of the great Russian classics into Hindi.

After eight years Bhisham Sahni returned to India and went back to teaching English in Zakir Hussien College, and remained immersed in his creative endeavours.. In the interim, he wrote some well known plays like Hanoosh, Madhvi, Aalamgir and Kabira Khada Bazaar Mein. Actually, he was multi-faceted. He was a large-hearted person and his entire writing was devoted to ordinary people. He was a dynamic and forward-looking writer. Among the founders of the collective literary tradition of Hindi, he will always have a pride of place.

A writer is a light that  never goes out and continues to illumine. Bhisham Sahni lived just as such a writer and despite passing away on 11 July, he will continue to shine on.