Did a Pakistani aircraft, which had gone to Iran to deliver some equipment, stop in a Syrian airport on its way back to pick up Iraqi WMD "material"? Was it brought to Pakistan for safe custody? Pakistani sources are not not clear by "material" -- on 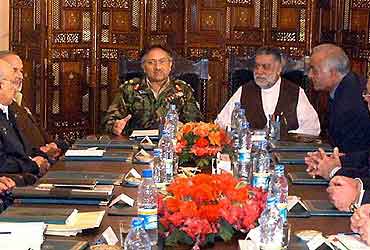 Despite the attempts of President Pervez Musharraf of Pakistan to put a strong lid over the raging controversy on the role of Pakistan in helping Iran, Libya and North Korea to achieve a military nuclear capability by persuading/pressuring A.Q.Khan, the so-called father of Pakistan's atomic bomb, to do a mea culpa on Pakistan's TV and then pardoning him because of his past services to the country, this issue is not going to die down. The world has not seen the last of the nasty surprises in this l'affaire Paknucleargate.

There are many intriguing questions which have remained unanswered. The first  is why did Iran and Libya let down Pakistan by giving officials of the International Atomic Energy Agency (IAEA) all the details of the role played by Pakistani scientists in helping them to develop a military nuclear capability? Since the beginning of 2003, Iran was under tremendous pressure from the IAEA and the US to come clean on its nuclear projects after the IAEA detected its enrichment plant at Natanz. All that Iran had to do to avoid international sanctions was to admit that it had a clandestine programme,  give details of it and agree to dismantle it. It did not have to volunteer details of the role of Pakistan in this programme. Why did it do so?

Ever since sections of the US media got hold of the inspection reports of the IAEA inspectors who had visited Natanz and other sites in Iran and reported that the centrifuges being used by Iran, which had traces of enriched uranium, were second hand and that Iran itself had admitted that it bought them from elsewhere, there was considerable nervousness and even panic in the Pakistan Army's GHQ and in the nuclear establishment. A.Q.Khan made at least half a dozen visits to Dubai to meet officials of the Iranian intelligence and nuclear establishment. On at least one of his visits, he was accompanied by Lt.Gen.Ehsan-ul-Haq, the Director-General of Pakistan's Inter-Services Intelligence (ISI).

According to reliable sources, during these meetings A.Q.Khan pleaded with the Iranians to return the copies of the drawings of the URENCO uranium enrichment  plant in Holland  which he had given to them in the past and not to tell the IAEA inspectors anything about the Pakistani origin of the centrifuges. The Iranian officials evaded his requests to return the drawings, but reportedly assured him that they would not reveal anything which might embarrass Pakistan. And yet, they did. Why? What had gone wrong in Pakistan-Iran relations which made Teheran insensitive to Pakistani concerns.

The Pakistani military-intelligence establishment was thus aware for over a year that Teheran was under pressure from the US and the IAEA to come clean on its military nuclear programme and the  external assistance received by it. It was, therefore, mentally prepared for the subsequent developments to the detriment of the credibility of Pakistan's past assurances that there had never been a leakage of Pakistani nuclear expertise to other countries.

What came as a real bombshell to it was the disclosure by the US and the UK towards the end of 2003 that officials of Gadaffi had been secretly talking to them on Libya's clandestine nuclear programme and had agreed to dismantle it. The US-UK talks with Libya were a well-kept secret and, to my knowledge, none of the Western media could get scent of it.

Till the Libyan case broke out, Musharraf was fairly confident that he would be able to ride out the storm over the disclosures of Pakistani collaboration with Iran without any adverse consequences to himself or to Pakistan because this collaboration had started during the rule of the late Gen.Zia-ul-Haq and Mrs. Benazir Bhutto and his own role was minimal.

As against this, the reports towards the end of 2003 that Libya too had made a clean breast of its clandestine programme and the role of Pakistan in it shook his sang-froid for two reasons. Firstly, much of this collaboration had taken place after he seized power on October 12,1999. Secondly, since he had been unaware of the secret talks of Libya with the US and the UK, he had had no time or opportunity for damage limitation.

Why did Libya, like Iran, betray Pakistan by volunteering information about the role of Pakistan to its interlocutors from the US and the UK and subsequently from the IAEA when it was brought into the picture? What explains the total lack of concern of Iran and Libya to the embarrassment and difficulties which they would be creating for Pakistan by their singing on this subject?

Many reasons are offered by Pakistani sources. They are speculative and not convincing , but would still need to be noted:

A more acceptable reason is the fear caused among the leaders of Iran and Libya by the fate of Saddam Hussein at the hands of the US. The capture and public humiliation of Saddam have had no effect on the anti-US resistance movement in Iraq, but they have definitely had a sobering effect on many rulers of the Islamic world and made them more responsive to US concerns on the proliferation issue.

The third intriguing question without a convincing answer is why did A.Q.Khan have to admit the Pakistani role  in helping North Korea in its clandestine military nuclear programme? In the case of Iran and Libya, he had no other alternative but to admit the wrong-doing after the two countries volunteered to the IAEA the details of the Pakistani role. North Korea has till now not betrayed Pakistan and has not admitted to any foreign role in its programme.

And yet, one could detect from October, 2003, onwards signs of nervousness in Pakistan's GHQ over the possibility of the US finding a smoking gun there too. Before October, Musharraf repeatedly denied any co-operation with North Korea in the nuclear and missile fields. After his visit to Kuala Lumpur in October, 2003, to attend the summit of the Organisation of Islamic Conference (OIC), he went to South Korea where, to the surprise of many, he admitted for the first time North Korean inputs into Pakistan's missile programme, but denied any co-operation in the nuclear field.

That was the position till the last week of January, 2004. Now, one finds A.Q.Khan admitting in a signed confession submitted to Pakistan's Nuclear Command Authority his role in assisting North Korea too to develop a military nuclear capability. What made him do so?

Dawn, the prestigious daily of Karachi, reported as follows (February 5 ) on the signed confession:

"Dr Khan in his signed statement, which he handed over to authorities, had accepted supplying old and discarded centrifuge and enrichment machines together with sets of drawings, sketches, technical data and depleted Hexaflouride (UF6) gas to North Korea. But he categorically denied that Pakistan's missile programme was in any way the result of an exchange of technology with Pyongyang. Between 1997 and 1999, orders were placed for the production of components for centrifuge machines while during 1998-2000, technical assistance was provided to North Korea. Between 1999-2001, intelligence officials had found nothing after they raided a North Korea-bound chartered aircraft. However, Dr A.Q. Khan was alerted by the chief of the general staff [My comment: Lt.Gen. Mohammad Aziz Khan?] and the director-general of the Inter-Services Intelligence [My comments: Lt.Gen.Mahmood Ahmed?]."

According to Pakistani sources, after reports appeared in the Pakistani and US media that A.Q.Khan had been talking of Musharraf being in the picture about his proliferation activities, Musharraf sent for him and pleaded with him in the supreme national interest to admit his personal guilt and not to implicate the Governments of the day. He told Khan that if he spoke of the Government's involvement in the entire affair, Pakistan's nuclear capability would be in danger.

Khan agreed to do so. His mea culpa statement for public release as drafted by the Nuclear Command Authority referred  only to his proliferation activities in general without any specific reference to Iran, Libya and North Korea. His apology was unqualified. But when he subsequently read out the statement before the TV cameras, he surprised Pakistani officials by introducing the words "in good faith".

That is, whatever transgressions he and his colleagues had committed, they did so "in good faith", meaning implicitly in good faith that he had the approval of his superiors for his transgressions. After agreeing to bail out the military leadership in supreme national interest, he had second thoughts and introduced this tell-tale change in his statement to point the needle of suspicion once again at Musharraf and his predecessors.

His mea culpa statement was not telecast live. It was pre-recorded and telecast later. How come the Pakistani authorities did not notice the change made by Khan and let it be telecast as read out by him? Another question without a convincing answer.

Pakistani sources claim that there has been another bombshell in the admissions of guilt made by Khan's colleagues and juniors, who are still under custody and questioning. They are reported to have stated that during his over 40 visits to Dubai in the last three years, he had met Iraqi intelligence officials who sought his help in having some of the weapons of mass destruction (WMD) material of Iraq airlifted from Syria to Pakistan for being kept in safe custody there to prevent their falling into the hands of the UN inspectors. Khan allegedly agreed to their request. According to them, in October,2002, Khan had a Pakistani aircraft, which had gone to Iran to deliver some equipment, stop in a Syrian airport on its way back . It picked up the Iraqi WMD "material" and brought it to Pakistan for safe custody on behalf of Iraq. It is not clear what did they mean by material -- only documents or something more?

The Musharraf regime has been desperately trying to see that this is not played up in the Pakistani media. There was a note of desperation in Musharraf's admonition of the media during his press conference on February 5, 2004, at which he announced his pardon for Khan. He said:

"For me Pakistan comes first and everything else is  secondary. In the first place you (the media) should play a more responsible role in this matter and secondly, even if for the sake of argument it is accepted that the government and the army were involved in the affair, do you think it will serve our national interest to shout about it from the roof-top?"

The Deadly Lies Of Reliable Sources