India's interests, in both the civilian and strategic fields are protected. Whatever the strategic purposes of the US, a friendlier and closer relationship is probably reflective of the goals of India's new generation for technological freedom. 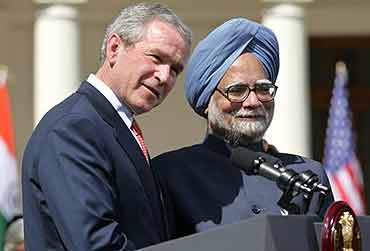 July seems to be a particularly significant month for Prime Minister Manmohan Singh--in July 1991, as Finance Minister in the Narasimha Rao government, he announced the liberalization of industry from government controls in his budget speech, starting the move towards the opening up of the Indian economy. In July 2005, in a Joint Statement with President Bush, he initiated a process aimed at removing three decades of technology denial to India by most of the countries with advanced technology.   The process was centred on an agreement with the US, the progenitor of the denial regimes, in civilian nuclear energy. And then, last week, after a rocky and strenuous two years of negotiations, the government of India approved such an agreement.

While the text is not yet publicly available, it is clear that, in spite of fears and dire prognostications, India’s negotiators have been able to project and protect India’s interests, in both the civilian and strategic fields. It is true that, as in the case of his economic reforms, Prime Minister Manmohan Singh is not solely responsible for this achievement; he built on a basis established by his predecessors and has been assisted be an outstanding team of negotiators.

To briefly put the agreement--called the ‘123’ agreement as it is under that section of the US Atomic Energy Act that the US signs such cooperation agreements with other countries--into a context, it is necessary to recall that India started her nuclear energy programme with international cooperation, including with the US, and in fact signed on to a Partial Test Ban Treaty in 1963. However, when the US and the USSR pushed through a discriminatory Nuclear non-Proliferation Treaty in 1970, after China had conducted her first nuclear test in 1964, India refused to join. In 1971, the nuclear armed USS Enterprise sailed into the Bay of Bengal to put pressure on an India that was winning the Bangladesh war, India tested a nuclear device, in 1974. Enraged, the US not only passed domestic laws to curtail the flow of all dual use technology to India, but by 1975, had established the Nuclear Suppliers Group to ensure that the technology denial regime was broad based. The nuclear issue became, and remained, for the next thirty years, a major obstacle in normal India-US relations.

In 1998, India conducted five nuclear tests and declared herself a nuclear weapon state . After an initial period of outrage, the US government, under President Clinton, a Democrat, appeared to move towards an engagement with India, recognizing that India’s security interests had to be taken into account, even while pushing for a global non-proliferation regime with progressively stricter controls on the export of dual use items and technologies to India. The objective of that government was to discuss civilian nuclear cooperation with India, even while attempting to ‘cap, roll back and eliminate’ India’s weapons programme. Clearly, this approach did not lead to any significant improvement in relations.

In the meanwhile, India’s economy had started to grow and the world itself had started to change. The Bush Administration, a Republican one, realized that it had much to gain if it could forge a new and friendly relationship with India, and for that, the nuclear ‘issue’ had to be resolved. To accomplish this, the US had to change its domestic law to favour only one country, India. For India, an opportunity presented itself to unshackle the nuclear energy sector, and to benefit from free flows of high technology to enable her to build a competitive knowledge based economy, without compromising her security interests or her technological independence.

India offered to separate her civilian and military facilities and place the former under IAEA safeguards; in return the US proceeded to change its laws to ‘exceptionalise’ India. The Hyde Act, finally passed by the US Congress, did ‘exceptionalise’ India, but it also introduced a series of conditions which made the Act as much a non-proliferation act as a cooperation one. This was a reflection of an entrenched distrust of India in parts of the US establishment, with memories of not only India’s own hostility to the US during the Cold War, but the indignation at India’s nuclear weapons tests, still alive. It was this mind set ( with an almost mirror image in India) that the negotiators of the Agreement had to contend with. It has been held that the US Congress, in permitting civilian nuclear cooperation with India, has only reiterated those sections of US law that were not amended; however, the inclusion of sections of a US non-proliferation law that had generic reference were made specific to India.

This would have been the biggest hurdle before the negotiators, one that was handled by the US side as the law applied to them and could not bind India. Clearly, this obstacle was overcome by intervention at the political level which had determined that friendly relations with India required flexibility and sensitivity to India’s concerns. There are already reports of a negative reaction in the US, with some US Congressmen taking strong exception to the ‘concessions’ made by the US to India in the Agreement.

However, India had specific concerns, too. India’s nuclear programme depends on reprocessing spent fuel; the US, in its other 123 agreements gives such rights (when using US fuel or materiel) only to safeguarded facilities. India, which had not, in its separation plan, provided for any reprocessing plants to be placed under safeguards, offered, as a compromise to build a special reprocessing plant for US fuel which it would place under safeguards. In any case, US law does not bar reprocessing rights. Secondly, India had, in March 2006, agreed to place each civilian facility under safeguards for the lifetime of the facility, provided such facility was assured fuel in perpetuity. This was a major issue, as India still had bitter memories of Tarapur. According to US law, if a non-nuclear weapon state tested a nuclear weapon all cooperation would cease, and all materiel or fuel imported from the US would have to be returned. This would have implied that either India’s investments or her freedom to test in the future, should she require to do so, would be jeopardized. Obviously, while politically the US accepted India’s possession of nuclear weapons, no amendment had been introduced to the legal provisions. A third area of difficulty related to the transfer of enrichment and reprocessing technologies; while India does not need such technologies, having developed her own, she could not accept any discrimination in treatment, which might impact on some components she may require in the future. According to the Prime Minister and the External Affairs Minister, all India’s concerns have been "satisfactorily" met in the Agreement.

Of course, there are still further steps to be taken and obstacles to be overcome. The Nuclear Suppliers Group has to be persuaded to make the same exception for India--will China agree, without some provision for Pakistan? India has to negotiate a sui generis India-specific safeguards agreement with the IAEA for her civilian reactors, the US Congress has to approve the whole deal after it is completed, not necessarily a foregone conclusion. In India, opposition Parties, particularly the Left front have to concur-an uncertain eventuality.

To try and change mindsets, to overcome decades of estrangement, distrust and adversarial relations, through  a single Agreement, however significant, is a giant task  Whatever the strategic purposes of the US, a friendlier and closer relationship is probably reflective of the goals of India’s new generation for technological freedom.. It is the heart of the matter.

Arundhati Ghose was India's permanent representative/ ambassador to the United Nations. In 1996, she dramatically vetoed the Comprehensive Test Ban Treaty at the Conference on Disarmament, a step that some say would not have been taken without her. This piece was originally written for Outlook Saptahik

Alliance With One Man