The most worrisome aspect of Narendra Modi’s personality is not his attitude to the religious minorities which has become more benign and positive now than it seemed to be in 2002, but his attempt to build a personality cult around him 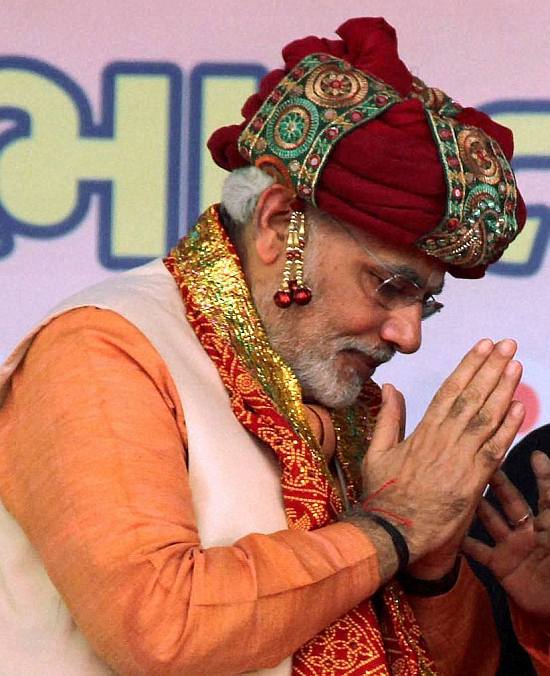 Mr Narendra Modi, the Chief Minister of Gujarat, never allows grass to grow under his feet. While the Congress party is still confused as to what should be its strategy and tactics for the forthcoming elections to the state assembly later this year, Mr Modi, like the proverbial hare, has already started racing ahead. He has inaugurated his and the BJP’s state election campaign with a powerful indictment of the state of corruption in the government of India.

It is evident Mr Modi will have a two-pronged election strategy which will focus on his record as the Chief Minister and highlight what he projects as the injustices and step-motherly policies of the government of India towards his government.

Will the Congress tortoise be able to catch up with the hare and overtake it ultimately? The answer to this will depend not only on its stamina and winner instinct, but also on its ability to project before the voters of Gujarat a credible alternative to Mr Modi in terms of individuals and policies. One sees no clear sign of any logical thinking in the Congress.

The 2009 elections to the Lok Sabha clearly showed that demonization and denigration of an individual does not bring in poll dividends. Instead of placing before the voters an attractive policy alternative package, Mr L.K.Advani focussed the entire campaign of the BJP on an attempt to demonise and denigrate Dr Manmohan Singh as the Prime Minister. It did not pay.

Similarly, the BJP’s current campaign of demonization and denigration of the Prime Minister is not showing signs of bringing in any significant poll return. The people are increasingly disillusioned with the Prime Minister and the Congress because of their perceived sins of commission and omission.

This disillusionment with the Congress and the PM has not been translated into a fascination for the BJP and its leaders. There has been a definitive corrosion of the support enjoyed by the Congress, but this corrosion has not been to the significant benefit of the BJP and its leaders. There are no signs of a gathering pro-BJP wave in the country. Disillusionment with the Congress and scepticism towards the BJP are the defining characteristics of the current public mood in the country.

Against this background, the Congress has to realise that any election campaign in Gujarat based on a continuing demonization of Narendra Modi for the communal violence of 2002 will bring in ever-diminishing returns. The time has come to jettison the policy of demonization of Mr Modi.

The Congress election campaign has to be based on a clear understanding of the ground situation in Gujarat and the electoral strategy of Mr Modi and his supporters in his party and from the diaspora.

Mr Modi enjoys three formidable assets-- his record as an effective administrator, his achievements in developing the economy of the State and his reputation as an honest leader who has not allowed corruption to flourish under his watch. The public perception of his record as the Chief Minister is going to be his best poll ally.

But Mr Modi is not a paragon of all positive qualities. There are two negatives in his personality and leadership which have not been brought out by the Congress. The first is his drive to build a personality cult around him by skilfully exploiting the modern means of communication and the virtual world and the backing of a group of IT-savvy individuals from the diaspora about whose background and credentials the voters of this country know very little.

The entourage of Mrs Sonia Gandhi and Dr Manmohan Singh is a relatively open book. One cannot say the same thing about the entourage of Mr Modi, particularly the diaspora members of his entourage. This entourage, with the diaspora members driving from the back seat, has been seeking to bulldoze Mr Modi’s way forward towards winning another term as the Chief Minister and ultimately occupying the Chair of the Prime Minister.

This lack of transparency regarding his entourage and particularly of the NRIs who have flocked to his flag should be a matter of concern to the right-thinking persons in our country. In the attempt to build a personality cult around him and make him seem 15 feet tall, his entourage has been quietly trying to identify and undermine the potential challengers to his way forward.

Mr Modi has been in power for a decade now. Has the time not come to discourage the trend towards a personality cult by trying an alternate leader? An accepted principle in many democracies is that a personality cult would prove detrimental to the health of democracy. That is why many democracies have put a limit to the number of years a head of government or state can hold office. There are two-term limits in the US and France where the head of state/government is directly elected. Even in authoritarian societies such as Russia and China there are two-term limits. No leader, however brilliant, should be allowed to occupy the chair of the head of the government for a long period.

In countries such as the UK, where the head of government is not directly elected, there is no constitutionally laid down limit, but their political culture sees to it that there is no bulldozed attempt to build a personality cult. The most worrisome aspect of Mr Modi’s personality is not his attitude to the religious minorities which has become more benign and positive now than it seemed to be in 2002, but his attempt, with the backing of his entourage, to build a personality cult around him.

Secondly, Mr Modi’s economic achievements seem so dazzling that nobody has gone into them in depth. Who are the ultimate beneficiaries of his economic policies-- certain corporate houses or the common people as a whole? Is his gathering support thanks to people-friendly policies or corporate-friendly ones? These are questions that have not been posed and discussed in depth.

Nobody can question Mr Modi’s achievements. They are there for all to see. But, nobody can fail to be disturbed by the personality cult being built around him. And one should not hesitate to raise questions about the ultimate beneficiaries of his economic policies.

Has the time come to seek an alternative to Mr Modi and his policies? That question has to be addressed in the weeks ahead before the Gujarat elections.

The New Winds From Yemen