Home  »  Website  »  Sports  » Opinion  »  The Ground Beneath Their Feet
Opinion

The Ground Beneath Their Feet

Despite all the hue and cry about the placid track, I believe Pakistan wanted this type of pitch. It was a very risky game plan. Imagine what would have happened if India batted first! 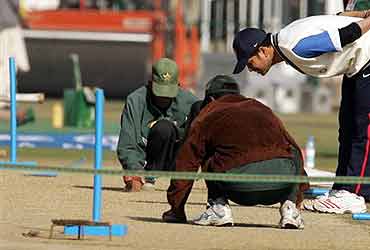 Knives are out at the curators for preparing a placid batting track for the first Test against India and the cricket administrators are blaming the weather. Frankly speaking, no curator in the world is so authoritative or powerful that he would prepare a pitch against the wishes of the home team management.

When I was captain in the home series against England in 2000, we wanted spinning tracks and we got them, although we lost the Karachi Test in near darkness. So, to say that the groundsmen did not get instructions from the team management, is a poor explanation and an effort to shift the blame.

What is understandable, though, is that the curators failed to produce the pitch they were expected to. But again, I have a different view on this and I believe that Pakistan wanted this type of pitch.

Pakistan declared their first innings at 679 and if my memory is correct, they scored something like 350 runs in under 60 overs on the second day. I think they thought that on this wicket, the ball would reverse and their pace trio would run through the Indian batting line-up that was a bit nervous due to several reasons.

The home team was also banking on Danish Kaneria to pick up a few wickets on a pitch that would deteriorate because he is a big turner of the ball and has plenty of varieties that he uses intelligently. That game plan backfired simply because Virender Sehwag and Rahul Dravid played a marvellous innings.

It was a very risky game plan. For a minute, lets assume India had won the toss and set Pakistan a 480-run target to avoid the follow-on. Would Pakistan have batted as well as the Indians did? Your guess is as good as mine! The Lahore wicket, I believe, was not much different to the one we got in Multan a couple of years ago and there, India batted first and we suffered an innings defeat.

India gained everything from the weather-affected Test. The tourists had arrived here unsure what to expect from the hosts who were flying high after a memorable victory over England in the Test and one-day series.

In contrast, India, despite beating South Africa and Sri Lanka at home, had problems with team selection and in the batting order, made all the more difficult after the inclusion of Sourav Ganguly. Dravid was captaining the team for the first time in a big series like this and the bowlers needed time to settle down.

But after the Lahore Test, everything apparently has fallen in the right place for the visitors. Dravid made a courageous and intelligent decision to open the innings in order to make optimum use of the experience that was available while adjusting Ganguly in the middle-order. The Indian bowlers may have lost some confidence after the hammering they got from the Pakistanis but it was restored with a mammoth 410-run first wicket partnership between Sehwag and Dravid.

If India gained everything, what did Pakistan earn? To me, nothing. In fact, they lost everything. The pre-series tag of favourites has gone down the drain and as I see things, they may go to the drawing board wondering what to do for the Faisalabad and Karachi Tests, particularly for the last Test because everyone is expecting another weather-hit game in Faisalabad.

I have received plenty of calls from cricket followers who are asking why Pakistan didn't leave grass on the wicket. I have no real explanation to offer except that the Pakistan batsmen might not feel comfortable batting on green tops or there is a question mark on the fitness of Shoaib Akhtar who is already carrying a niggle in his ankle since the England series.

Besides, I don't really remember if we have ever played on seaming tracks at home even at the time when we had the fastest bowlers in Imran Khan, Wasim Akram or Waqar Younis. We have always depended on Abdul Qadir, Tauseef Ahmed, Iqbal Qasim, Mushtaq Ahmed and Saqlain Mushtaq, and are now relying on Kaneria.

Whatever maybe the wicket, we cannot take any credit away from Sehwag and Dravid. They are batsmen of contrasting styles and thoroughly displayed their immense talent, footwork and eye. Sehwag, we all know, is a dangerous batsman and although the Pakistan bowlers tried to trap him by bowling in his rib-cage area, he nicely tackled those deliveries.

Dravid was cool and composed as ever, although it is very difficult for a batsmen to keep pace with a partner who is firing all guns blazing. It was sad that they missed breaking the world record by four runs but I think Greg Chappell is largely responsible for that.

The Indian coach should have sent out a message on the fourth evening informing the two about the record and they should have continued instead of accepting light even at the time when they were sending the ball to all parts of the ground.

Chappell, to me, still appears uncomfortable with the presence of Ganguly and the animated discussion before the start of the match between him, the former captain and Dravid, says it all.

To add to the controversy, he was quoted as saying in his press conference after the first day's play that he had not yet decided on the batting order. That's hilarious! He had finalised the playing lineup and he did not know who'd bat where?

The more quickly the Indian team gets over this Ganguly affair, the better because this is an opportunist Pakistan side, capable of pouncing on any opportunity that comes their way.