The Fear Of Rural Failure

The success India achieved with its IT-led service and now manufacturing industries made it a poster child for globalization. The crisis of India's farmers has the potential to derail the country's exceptional economic growth 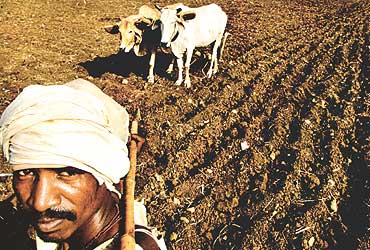 In foreign media reports India is shining. Even India's biggest English daily has begun a campaign called India Poised. But India's leaders know that a deepening crisis facing India's multitude of farmers threatens to spoil the party in Mumbai and Bangalore. India's Minister of Finance Palaniappan Chidambaram put agriculture at the center of India's latest budget. [1]

In his speech on the budget, Chidambaram quoted Nehru: "Everything else can wait, but not agriculture." Agriculture represents much more to India than a mere slice of economic pie – it is the very lifeblood of the country, the source of livelihood for 115 million farming families and 70 percent of the country's population, the base upon which the entire edifice of the nation rises.

With annual growth in manufacturing and in services each topping 11 percent, agriculture's 2.3 percent growth rate lags stubbornly behind the 4 percent target India must hit if it is to push overall growth – now at 9.2 percent – into double digits. The government's challenge is to implement policies that promote growth but also provide relief to India's stressed small-scale farmers, or else the country will have to reckon with much more than a missed growth target.

The social, political and economic threats to Indian agriculture are numerous.

India struggles with a worsening water crisis that includes plummeting water tables. Global warming increasingly threatens both the annual monsoon rains essential to life on the subcontinent and the Himalayan glaciers and snows long considered eternal. The vast majority of India's farmers exploit land holdings smaller than 5 acres and as small as half an acre. They have had difficulty coping with the opening of India's agricultural sector to market forces and the elimination of price supports for crops such as cotton. Many have borrowed money at usurious rates from private lenders to pay for more expensive hybrid and genetically modified seeds, which has plunged them into debt they cannot pay off. Arable land is shrinking as urban expansion and manufacturing gobble up thousands of acres of farmland. During the past decade that brought prosperity to so many in India, more than 25,000 Indian farmers committed suicide. An emboldened Maoist insurgency continues to expand its influence, staging violent attacks and assassinations with impunity.

While farmers struggle, agricultural production cannot meet demand. Rising food prices are fueling inflation, causing real suffering among the 850 million Indians who struggle to live on less than $2 per day. One of the ironies of democratic India is that it is the poor who vote. [2] The current government has many reasons for placing agriculture at the center of the new budget.

India, long one of the most productive agricultural regions of the world, could not meet its basic need for food grains during the early years of the nation's independence. The Green Revolution of the 1960s and 1970s dramatically improved yields in India. With considerable national pride, India boasted that it had achieved not only self-sufficiency in food grains, but had become a grain-exporting nation. In 2006, however, for the first time since the Green Revolution, and in part because of changes in agricultural policy, India had to import wheat. India will again have to import food grains in 2007.

The new budget presented by Chidambaram includes a smorgasbord of specific remedies to India's complex agricultural crisis, with increased allocations for irrigation and groundwater recharge, farm credit, rural education, farm-extension services, roads and power, and for the National Rural Employment Guarantee Scheme, which offers 100 days of guaranteed employment to one family member of impoverished rural households.

The need is great. Last year, I traveled to villages in the Vidarbha region of eastern Maharashtra state, hard hit by a spate of farmer suicides. In the village of Barshi Takli, I sat with a mother who cried for her 20-year-old son who had killed himself a few days after the family's sugarcane crop failed. Their well had gone dry, and they couldn't afford to dig it deeper. With no access to irrigation, they depended on erratic rains, and when these failed, so did their crop.

Desperate for income, they had put all their land into a cash crop, borrowing money to purchase the inputs they needed and neglecting to set aside a portion of land to grow their own food. The family's son, carrying the burden of the household, had no way to repay the local moneylenders from whom he'd borrowed at usurious rates of interest. I visited family after family in similar straits.

The expansion of farm credit and investment in irrigation promised in the new budget, while essential to larger-scale farms, would not have saved most of these families. Their farming operations are too small to qualify for bank loans, even those guaranteed by the government. Large-scale government irrigation schemes won't reach them.

Credit and irrigation measures scaled to the limited resources and critical needs of small family farms could make a difference to these farmers. The expansion of micro-credit opportunities as well as low-cost micro-irrigation systems such as those being manufactured and sold in India by International Development Enterprises (IDE), a company supported by the innovative social-venture Acumen Fund, could make a critical difference. Designed for small plots of land and expandable with investment increments, as little as $45, IDE systems can increase water efficiency by 50 percent and improve yields by 30 percent. 3 Small-scale systems such as these not only can save crops, they can literally save farmers' lives.

Large-scale industrial agribusiness will not work in India. Indian farmers have little hope of finding employment elsewhere. They must be able to earn a decent living on their land. And they must be able to do this in a way that is environmentally sustainable. The Green Revolution's increased yields were achieved in part by huge inputs of synthetic fertilizers and pesticides, both of which have inflicted massive damage on India's stressed environment.

Chidambaram admits that his government's true challenge is not only to come up with the right policies and programs but "to deliver the intended outcomes." The success India achieved with its IT-led service and now manufacturing industries made it a poster child for globalization. This could be eclipsed by the rural failure. The Manmohan Singh government cannot afford to do what its predecessors have done – let rural India languish. The best strategy it can embrace is one where farmers' needs dictate innovative solutions from the bottom up and where social entrepreneurship can flourish along with an increasingly empowered and prosperous rural population.

Mira Kamdar, an associate fellow of the Asia Society and a senior fellow at the World Policy Institute based in New York, is the author of Planet India, published by Scribner 2007. Rights: © 2007 Yale Center for the Study of Globalization. YaleGlobal Online

1 A copy of the full text of Chidambaram's February 28, 2007, speech is available here