The False Gods We Worship

It is disheartening to see some of the brightest and most respected minds in India venting their rage at Amitabh Bachchan for not being what he has never claimed he is in the first place. 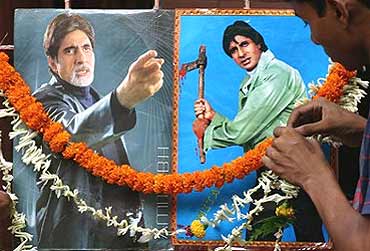 It is disheartening to see some of the brightest and most respected minds in India venting their rage at Amitabh Bachchan for not being what he has never claimed he is in the first place. The biggest complaint seems that his recent behaviour has not been in keeping with his stature as a refined "intellectual." He is being charged with betraying his father, Harivansh Rai’s legacy and for displaying his cultural poverty publicly. He is being chided for going to temples and turning his son’s private wedding into a tamasha.

To the best that one can recall, however, Bachchan has never claimed that he is an intellectual, much less a thinker, in his father’s mould. He has never made public utterances of any worth, he have never muttered a word that can be interpreted as carrying any heft. Yes, he did represent all things anti-Establishment on screen in the 1970s and 1980s but that was his job. He was enacting scripts written by others. 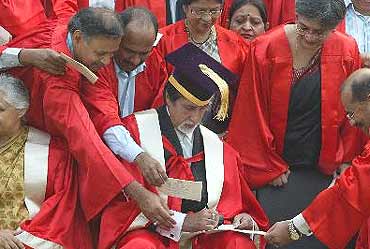 So why should we expect intellectualism and progressivism from him? He has always been just an actor and that too not a thinking one. So he’s not at fault. It is we who have been projecting our own sensibilities on to him, we who want him to behave in a manner that would satisfy our image of him as a national hero. He is not, and to his credit he has never claimed that he is. So don’t put him in the dock for a crime he has never committed.

He is a mere mortal like the 99 percent of the Indians. He believes in God and believes in demonstrating how much he believes in God. Just as most of the Indians go to their gods to seek their blessings, he goes to his. Just as most of us believe that gods should be pacified time and again by the offerings of money and prasad, so does he. Just as many of us would like to protect our children from the "evil eyes" and unfavourable "doshas", so does he. He is a product of a society that remains conservative to its core despite all the outward trappings of modernity. 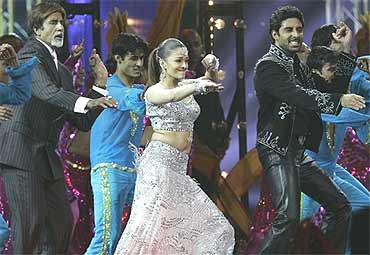 Similarly, his son and daughter-in-law are also products of a celebrity culture that produces icons that are as shallow as they are inconsequential. First, we make a national icon of a beauty queen and celebrate her as one of the success stories of modern India. And then when she decides to suffer her humiliation without so much as a murmur even as she is paraded from one temple to another, from one pundit to another, we shake our heads and bemoan her initiation into her new role as a "demure bahurani". This at a time when women across this country are rejecting the false constraints imposed by their society while here is a woman with all the power at her disposal who chooses to "stand behind quietly" and bask in her husband’s glory. Her husband, another icon of modern India, clearly loves her, but only so much. He wants her to be accepted by his parents and that includes her having to accommodate all the wishes of her in-laws. These are the brand ambassadors of an emerging, confident India, ranked as the most powerful and influential people in the country year after year. 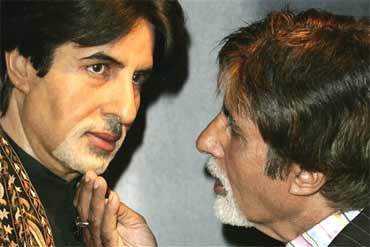 But Amitabh Bachchan and his family do not exist in a societal vacuum. Today’s India is an India where conformism is the new mantra, no one has any time to rebel, including the Angry Young Man of our films and his progeny. Why should Bachchans be any different? Why should Amitabh Bachchan be examined through the prism of his father’s ideology? Doesn’t it say enough about contemporary India that Harivansh Rai Bachchan is today known as Amitabh Bachchan’s father? 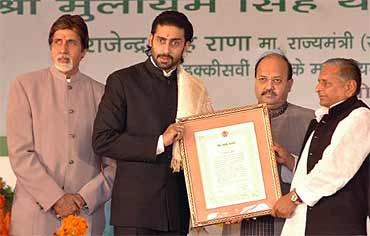 Harivansh Rai may have been a poet of a progressive, liberal vintage but his son has been too politically correct to be able to demonstrate his intellectualism in any form. Nonetheless, he has effectively used his closeness to political power to serve his interests. Once it was the Gandhis, now it’s Amar Singh-Mulayam Singh-Bal Thackeray combine. Can anyone be more politically regressive than this trio? Yet we continue to call upon Bachchan to demonstrate his progressive side when clearly there is none.

Only an actor can keep a straight face when claiming that he has nothing to do with politics and at the same time campaign for the Samajwadi Party by declaring "Uttar Pradesh mein dum hai, kyuunki yahaan jurm kam hai." Bachchan finds it hard to shed his political neutrality when events as disturbing as 1984 Delhi carnage, 1992 Mumbai riots, or 2002 Gujarat massacres take place lest it disturbs his carefully crafted political balance. Yet he does not find it problematic to support an administration in UP that has under its belt something as horrific as Nithari killings. 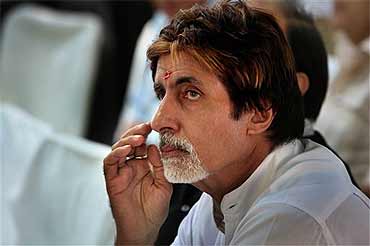 Politically inept, perhaps, but professionally always in charge, not even hesitating to charge his own company a fee to use his name. Heck, he apparently has even claimed that the Bachchans have always been farmers so as to continue to validate his claims on a piece of farm-land in the Pavana dam area near Lonavala. On top of that, every time he gets a notice from the Income Tax Department for the payment of his dues, we have to bear Amar Singh’s diatribe that the Bachchan family is being targeted due to some political vendetta.

And yet, for this country Amitabh Bachchan is not simply an honourable man but a national hero. The bitter reality is that he is not, in fact he never was. He has always been an actor with a full-time job of entertaining us, perhaps with a certain political savvy, with the normal contradictions and foibles of a human being. And that’s all right. Let him celebrate his son’s wedding the way he wants. Let him dance and enjoy. Let Hindi film songs be his and his family’s reference points. After all, they are the reference points for such a large chunk of this country. 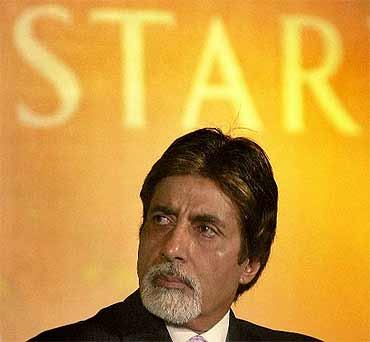 But let us examine ourselves and what we have made of ourselves as a society. We elevate an ordinary actor to extraordinary heights, call him a national hero, an icon even, and then pull him down. We cry foul when he refuses to behave as a hero or icon should. Leave him alone, let him be an actor. But don’t expect him to lead us out of regressive ideas and practices. For that we will have to wait for a real hero, someone who gives his or her life to something bigger than oneself.

Bertolt Brecht once said, "Unhappy the land that is in need of heroes." India today is a fundamentally unhappy and dissatisfied nation despite its eight percent rates of growth. And so we will continue to search for our heroes and will keep getting disappointed.

Till then let’s just give our wishes to the newly weds and their families.