Pakistan is the most dangerous country in the world, and the deadly embrace between America and Pakistan becomes more deadly every day. 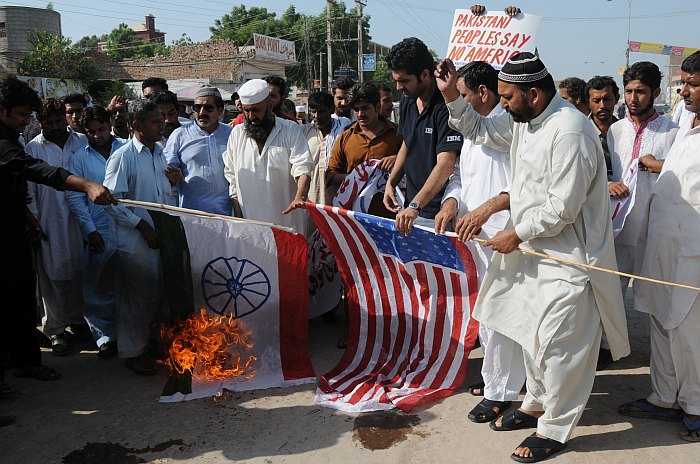 Tensions between Washington and Islamabad are at an all time high over Pakistan’s support for the Afghan Taliban. While Pakistan has long been the Taliban’s patron, providing it with sanctuary, the insurgents’ attacks on the US Embassy in Kabul and other high-profile NATO targets this fall have pushed long simmering tensions to a boil. Pakistan is encouraging provocative Taliban operations, raising questions: What is Pakistan’s goal in Afghanistan? What endgame does Pakistan’s army seek in the Afghan war?

Pakistan’s support for the Taliban is not new, of course, but US Admiral Mike Mullen was unusually blunt during his last testimony for the Senate Armed Services Committee before retiring as chairman of the joint chiefs. He rightly noted that both the central leadership of the Taliban, the so-called Quetta Shura, named after the city in Pakistan where it meets, and its most deadly cell, the Haqqani network, “operate from Pakistan with impunity.”He said Pakistan’s intelligence service, the ISI, uses them as “a strategic arm” and that ISI was directly involved in attacks on NATO targets. Since Mullen visited Pakistan 28 times as chairman and has described himself as Pakistan’s “best friend,” his remarks were especially powerful.

In response, the Pakistani chief of army staff, General Ashfaq Parvaz Kayani, convened an extraordinary meeting of the corps commanders of the army, the most powerful men in the country, and dispatched the head of the ISI on an urgent visit to Saudi Arabia to make sure Pakistan’s key ally was in step with the generals. Former ISI chief Hamid Gul spoke for the generals when he said the US was flirting with the “dangers of a third world war” by threatening Pakistan; another former ISI chief Javed Ashraf Qazi said the US is “pressuring Pakistan to hide its own failures in Afghanistan.” The Pakistani foreign minister chosen by the generals, Hina Rabbani Khar, warned that America needs Pakistan more than Pakistan needs America.

Pakistan and Afghanistan have always been conflicted neighbors. Afghanistan was the only country to vote against giving Pakistan a seat in the United Nations in 1947 because it disputes its British-imposed border, the Durand line drawn in 1893 by a British diplomat. No Afghan government, even the Taliban in the 1990s, has ever accepted the legitimacy of the border line, and some Afghan governments have laid claim to all of Pakistan west of the Indus River.

Pakistan’s generals have thus always been concerned about the danger of a hostile Afghanistan, especially one aligned with India. In the 1980s then dictator Zia ul Huq constantly warned the CIA of the threat posed by the Soviet-supported Afghan communist regime aligned with Indira Gandhi’s India, a treaty ally of Moscow. General Zia’s support for the ISI-CIA war against the Soviets was a function of his concern about Pakistan being squeezed between Afghanistan and India.

Today’s Pakistani generals see the same squeeze at play. General Gul warned after Mullen’s comments that Washington seeks an Afghan “proxy” for India. The ISI has used the Haqqani network more than once to attack Indian diplomatic targets in Afghanistan, which the Pakistanis suspect are bases for Indian intelligence operations aimed at Pakistan.

The Pakistani generals see the American and NATO presence in Afghanistan always in the context of America’s increasingly close relations with India. President Barack Obama’s visit to India in November, when he chose not to visit Pakistan, only reinforced Islamabad’s sense of isolation and the siege mentality that springs from it.

So the Pakistanis are now encouraging the Taliban to step up the war on NATO. They are convinced the Americans and Europeans are going to give up in Afghanistan and sooner or later cut and run. The ISI closely monitors the media on both sides of the Atlantic and reads polls that show support for the war is dwindling. They see Obama’s decision to draw down US surge forces faster than Mullen and other generals wanted as a sign American resolve is collapsing. They remember well that the US walked away from Afghanistan and Pakistan after defeating the Russians and are convinced it will happen again.

Now Pakistan wants to accelerate American departure. By spectacular attacks like the one on the embassy, the ISI hopes to convince Americans that the war is hopeless and that defeat is inevitable therefore give up now rather than later. If the TV talking heads say the war is unwinnable, America will quit.

For the generals, the American presence in Afghanistan has brought nothing but trouble. They blame the American war across the border for creating Pakistan’s militancy by pushing insurgents across the Durand line. They are humiliated by the drone strikes on jihadist targets in Pakistan’s tribal border zone; they were especially humiliated by the SEAL commando raid in May that killed Osama bin Laden just one mile from Pakistan’s top military academy in Abbotabad. The best solution for this trouble is an American defeat and withdrawal.

Some had hoped that Pakistan would at least facilitate talks between the Kabul government and the Taliban insurgency to provide a face-saving way to end the war. But the assassination of former Afghan President Burhanuddin Rabbani on September 20th has dashed any hopes of a negotiated agreement. Rabbani, long an enemy of the ISI, was charged by President Hamid Karzai with leading talks with the Taliban, but was murdered when a suicide bomber sent by the Quetta Shura on a fake peace mission blew himself up as he embraced Rabbani. Given the close connection between the Quetta leadership and the ISI, it is hard to believe the ISI did not have knowledge of the plot.

What the generals want is a puppet regime in Kabul or at least in most of southern and eastern Afghanistan, and the Taliban is the only instrument for achieving that. A revived Islamic Emirate of Afghanistan is the best insurance against a pro-India regime on the western border encouraging Pashtun and Baluchi separatism.

The military is a state within a state in Pakistan. The civilians, including President Asif Ali Zardari, live in fear of the ISI known for killing journalists and other enemies. The generals are not worried that America will cut off military aid; they calculate their Chinese and Saudi allies will give them what they need. China provides the nuclear reactors that fuel the fastest growing nuclear arsenal in the world. The Saudis have given more aid to Pakistan than to any other country.

And the military knows it controls the vital NATO supply line from Karachi to Kabul used to ship more half of the allies’ supplies into the country. Foreign Minister Khar was only partly bluffing when she said the US needs Pakistan more than it needs the US.

Admiral Mullen rightly has argued that despite all the frustration with Pakistan, despite the fact that they are helping to kill American soldiers, the US has no viable choice but to engage with the world’s second largest Muslim country and the sixth largest nation in the world. But the engagement is increasingly hostile; the US is now engaged in an undeclared air war in Pakistani territory. More SEAL missions are likely to protect American cities from bin Laden’s successors. Pakistan is the most dangerous country in the world, and the deadly embrace between America and Pakistan becomes more deadly every day.

Bruce Riedel is a senior fellow at the Saban Center in the Brookings Institution and adjunct professor at the School for Advanced International Studies at Johns Hopkins University. His most recent book,

Deadly Embrace: Pakistan, America and the Future of the Global Jihad,

came out in March. Rights:Copyright © 2011 Yale Center for the Study of Globalization.

Mutiny On The Titanic