'The Cusp Of Change'

Jagdish Bhagwati, the renowned economist, delivered an anecdote-laden lecture on the state of economy. 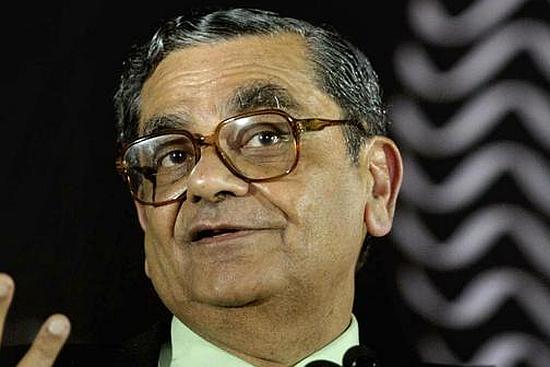 Humour and economics seem incongruous. Not so, when Prof Jagdish N Bhagwati of Columbia University took the mike at the Madhavrao Scindia Memorial Lecture in Delhi. The renowned economist delivered an anecdote-laden lecture on the state of economy. Or, more precisely, India under Prime Minister Narendra Modi's leadership.

He addrssed an audience that had several Congress leaders, including former Prime Minister Manmohan Singh, former finance minister P. Chidambaram, former Delhi chief minister Shiela Dikshit and many other senior leaders. That's why perhaps Bhagwati made it known that he has been a Congress supporter and not a follower of the ruling BJP, as is widely believed.

If Bhagwati in his lecture titled "The Cusp of Change" gave due credit to Manmohan Singh, his friend of 60 years, for being a major mover of India's first economic revolution in 1991, he also made no bones about his faith in Prime Minister Modi to deliver the promised second economic revolution by ushering reforms at a far faster pace than has been witnessed so far.

Here are eleven major takes from his lecture: