"Let's create some mahaul." Atmosphere. Voices blend in soulful, sonorous sorrow. It isn't good enough, apparently. "It's difficult to do after a haadsa like that." Incident. Happening. I am haunted by the song but it feels like a paraphrase..

I am excited. Excited enough to ask other people along for an insomniac evening. It’s a Thursday night AND it is Chand Raat, the night the Id ka Chand is finally sighted. Nizamuddin basti should be an endless sea of sensation, light and noise and grilling meat...

While walking in from Nizamuddin West, we pass a couple, blind beggar being led by semi-blind wife. Bugger this, he says, (well words to that effect) we should have stood near the dargah.

Business hasn’t been that good. On Chand Raat? That’s not very promising. 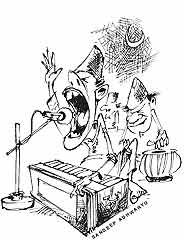 A little before midnight and it’s sort of quiet. Five minutes after we enter my favourite restaurant, Nasir Iqbal, we’re the only people there. There are cops on the road outside.

"It’s chand raat today, right? Where is the raunaq?"

"There were lots of people here till eleven, but now everyone’s gone home to prepare for tomorrow... and since the bombs there have been a lot of check posts put up here. That has made a big difference."

We walk in towards the dargah, with all the shops on the way winding down. There’s one person calling out to sell us
rose petals, just one offer of sevaiyan. Inside the dargah it’s emptier than I have ever seen it. The sound of water dripping from a hose is the loudest sound as the huge marble courtyard is cleaned for tomorrow’s prayers. A few people sitting around the mazaar, praying. The cats are out, prowling around the edges, looking for food, disappearing like ghosts through medieval crevices. We hear the faint strains of qawwali. We barge into the house of Nizami Bandhu, qawwals, and are graciously allowed to sit in on a late night riyaaz.

They live in the many-arched basement of a sixteenth century tomb, with kickass acoustics. They’re practicing for an upcoming tour of the United States. The regular rhythm guy still hasn’t got his visa. The last session is played back on a mobile phone. The next qawwali is taken up.

"It’s difficult to do after a haadsa like that." Incident. Happening. I am haunted by the song but it feels like a paraphrase: Mujhe chain se jeene ki ijaazat de de... Allow me to live in peace... O Lord?

It’s a song about Madina. City, in Arabic. This city? All cities?

They sing Kabir. Practice winds down around 1 am. Tea is called for, the family gathers around. We’re part of it all. The laughter, the camaraderie, the fun. Of course you have to stay for tea, you can’t leave. No one’s going to sleep
tonight anyway.

We finally leave after 1.30 am. The basti seems so much livelier than when we came. We eat insanely tasty phirni at 1.45 am. Our Id is already mubarak.