The opener cracked a fluent century to find his way into the record books as Sri Lanka launched their campaign with a scrappy 37-run victory over Bangladesh in a qualifying match. 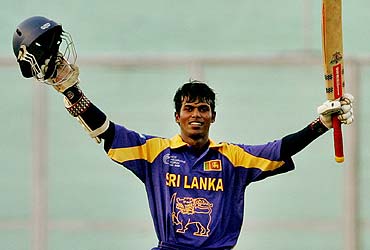 Upul Tharanga cracked a fluent century to find his way into the record books as Sri Lanka launched their ICC Champions Trophy campaign with a scrappy 37-run victory over Bangladesh in a qualifying match at Mohali tonight.

The young Tharanga gave ample proof of his class with a 129-ball 105 to steer Sri lanka to an imposing 302 for eight before the bowlers contained their unfancied opponents at 265 for nine in the floodlit game which quite unexpectedly went the whole distance.

The 21-year-old left hander, whose family home in Ambalagoda was washed away by the 2004 tsunami, not only notched up his fifth century but also created a commendable record by becoming the first batsman in ODI history to score five centuries in his first 30 appearances.

Faced with an uphill task of scoring at over six runs per over, the Bangladeshi batsmen played some cheeky shots now and then but lacked the firepower to pose overhaul the target of their vastly superior rivals.

The first match of the high-profile tournament, billed as a 'mini World Cup' unfolded in front of a near-empty PCA stadium as just a handful of spectators turned up to cheer the teams.

The Bangladeshis seemed to have a definite gameplan by opting to field first but the implementation went a little awry as the Lankans responded by rattling up a 300-plus total on what appeared to be a good batting track.

Saqibul Hasan (67 not out) hit his maiden unbeaten half century while Aftab Ahmed (33) and Farhad Reza (34) were the other notable contributors for Bangladesh. All the three batsmen unleashed some audacious strokes to provide the thrills in an otherwise boring run chase.

The Bangladeshis at least proved that they could not be treated as complete push-overs as they hung on resolutely despite the run-rate climbing well beyond their reach.

It was Bangladesh's highest total against Sri Lanka eclipsing the previous best of 231 for nine in Chittagong on February 25 this year.

The islanders could have mustered an even bigger total as Sanath Jayasuriya (31), captain Mahela Jayawardene (35), Kumar Sangakkara (22) and Marvan Atapattu (40) got the starts but could not capitalise on them.

Put into bat, the Sri Lankan openers Tharanga and Jayasuriya provided a decent start to the innings as they played the initial overs cautiously before launching a flurry of strokes.

The opening pair put on 67 runs on board before Rasel provided the breakthough for the Bangladeshis by getting rid of the dangerous Jayasuriya for 31.

Rasel managed to trap Jayasuriya in front of the wicket and umpire Daryl Harper took some time before ruling him leg before much to the jubilation of the Bangladeshis.

The presence of captain Mahela Jayawardene in the middle saw rapid acceleration in the scoring pace as the right-hander showed he was in fine nick by executing a barrage of strokes.

Jayawardene singled out paceman Farhad Reza for special treatment as he clobbered him for three fours and a huge six in one over to take the Lankan total beyond the 100-mark by the 17th over.

Jayawardene, who has been very successful at the number 3 slot, perished a few minutes later with Razzaq claiming the prized scalp.

Tharanga seemed to be in no discomfort at the other end and during the course of his conrolled innings as he completed 1000 ODI runs in his 30th match.

It was the second fastest compilation of 1000 ODI runs by a Sri Lankan after Roy Dias who achieved the feat in 27 matches.

Kumar Sangakkara, who joined the action after his captain's dismissal, also put on some quick runs with a 23-ball 22 but could not capitalise on the start as he went for a big stroke and only succeeded in holing out to Mashrafe Mortaza in the deep.

Former captain Marvan Atapattu, returning to international cricket after an injury lay-off, got into the groove straightaway and hit a quickfire 42-ball 40.