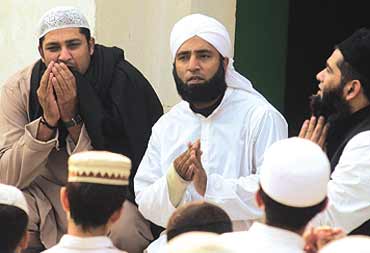 Did Pakistani cricket coach Bob Woolmer's criticism of the growing influence of the Tablighi Jamaat (TJ) of Pakistan, a jihadi organisation, on many players of the Pakistani cricket team contribute to his brutal murder after Pakistan lost to Ireland in the current World Cup Cricket Tournament in the West Indies?

Coinciding with the inauguration of the tournament, Amir Mir, the well-known Pakistani journalist, had written a disturbing article on the growing influence of the TJ on many members of the Pakistani cricket team and its negative impact on the performance of the team in recent years. His article did not receive the attention it deserved.

Other sources, however, say that Woolmer attributed the decline in the performance of the Pakistani cricket team in recent years to the growing influence of the TJ on some of the players, including the Captain, and their consequent indifference to training.They believed that they could win by praying. When the TJ preachers were there in the hotel during tours,Inzimam and other TJ players used to ignore Woolmer and did not heed his instructions. He reportedly felt that their loyalty was more to the TJ preachers than to him. It is said that this often became a contentious issue between Inzimam and the coach.

These sources also say that Inzimam, who is otherwise a likable and mild-mannered person, used to turn mad with fury when anybody criticised Islam or the TJ.

Former Pakistan Cricket Board chief Shahryar Khan has been quoted as telling Sportsweek on BBC Radio Five Live after the murder of Woolmer as follows: ""Bob told me about six months ago that he was very frustrated because the team was always at prayer at lunchtime, tea and after play.He was not able to get through to them on cricketing issues. He felt frustrated about that and asked me what to do.

"I said 'Please Bob, you're an outsider and foreigner so do not interfere with anything religiously-inclined because it will be counter-productive'. Three months later Bob came to see me and said my advice was invaluable because he found that the players praying together led to better team spirit. In the final analysis Bob was supportive of the fact that the team bonded on religious and cricketing lines as a basis for the team's performance. Bob did not interfere with religion and he respected the fact they wanted to play together. But he was worried that it would affect his ability to interact with the team. The training schedules were not really interfered with by the prayers which only took about four or five minutes. It was the fact he could not get through to the team at intervals in matches. Eventually he learned to live with it because it led to unity."Shahryar also revealed Woolmer never had full control of the national side with skipper Inzimam-ul-Haq "the unquestioned leader". "There was always a question mark regarding Bob taking total control of the team in every sense.There was resistance from Inzimam and perhaps successful resistance. Inzimam was the leader, the unquestioned leader of the team. They (the players) all fell into place around him and were totally supportive of Inzimam. Bob found it difficult sometimes."

It would be useful for the Jamaican Police to enquire whether any TJ cleric from Pakistan had accompanied the team, if so, his role, whether the TJ has a branch in the West Indies, whether its local leaders used to visit the hotel, whether Woolmer raised the issue of the negative influence of the TJ on the performance of the players against Ireland and whether it led to any quarrel with Inzimam and other members of the TJ group in the team. The TJ group in the team should be an important focus of the investigation.

'We Did Not Deserve The Cup'