Home  »  Website  »  International  » Reportage  »  'Surprised And Deeply Disappointed': India Reacts To US Decision To Go Back On Its Commitment For Food Security At WTO Meet

'Surprised And Deeply Disappointed': India Reacts To US Decision To Go Back On Its Commitment For Food Security At WTO Meet 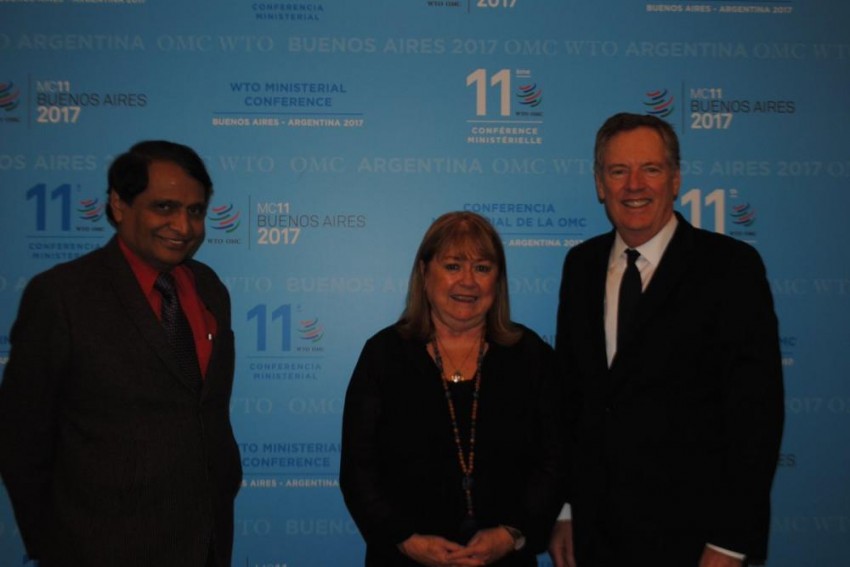 Curtesy: twitter.com/sureshpprabhu
Outlook Web Bureau December 13, 2017 00:00 IST 'Surprised And Deeply Disappointed': India Reacts To US Decision To Go Back On Its Commitment For Food Security At WTO Meet 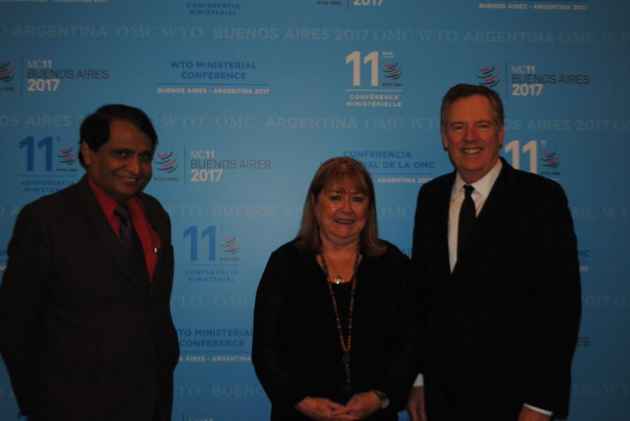 India today expressed "deep disappointment" over the United States' decision to go back on its commitment for a permanent solution to the public food stockholding issue at the ongoing ministerial conference of the World Trade Organisation (WTO).

India's attempts to find a permanent solution to the food stockpile issue at the 11th edition of the ministerial conference (MC11), has hit a roadblock as the US refused to engage, threatening a successful conclusion of the four-day conference.

Without naming the US, an official statement said, "India is surprised and deeply disappointed that despite an overwhelming majority of members reiterating it, a major member country has reneged on a commitment made two years ago to deliver a solution of critical importance for addressing hunger in some of the poorest countries of the world."

"...A major country stated categorically that they cannot agree to any permanent solution on the public stockholding at MC11. This has posed a severe threat to a successful conclusion of the conference as there was a ministerial for mandate for a permanent solution by the MC11," it said.

The ministerial conference is the highest decision-making body of the WTO.

The Indian team led by Commerce and Industry Minister Suresh Prabhu, in cooperation with the G33 grouping, has been pitching hard for permanent solution to food security issue as it is crucial for livelihood of 800 million people across the globe. The ministerial conference which began on Sunday, comes to a close on Wednesday.

According to sources, Assistant US Trade Representative Sharon Bomer Lauritsen, in a small group meeting, said that permanent solution to the food stockholding issue was not acceptable to America.

The non-fulfilments of a mandate flowing from a ministerial decision at Nairobi could "irreversibly" damage the credibility of the TWO, it added.

India, however, will continue to participate in the efforts to draft a credible ministerial declaration.

The effort, the release said, would be to ensure that declaration reaffirms the principles of the multilateral trading system, commits to completion of the Doha Development Agenda, maintains centrality of development and availability of special and differential treatment to developing countries.

India, it added, has been participating in MC11 in good faith in the spirit of constructive engagement and tried its best to engage with Members in all formats.

"We have been proponents in several areas of work in the WTO including public stockholding for food security purposes, agricultural Special Safeguard Mechanism, agricultural domestic support and e-commerce. We are committed to preserving and promoting the WTO and the multilateral trading system with a view to take the agreed agenda of the WTO forward," it added.

India's coalition partners, the release said, have remained steadfast in their support not only for a permanent solution on public stockholding but also on other issues of interest to developing countries.

The country had the support of over a 100 WTO member countries on all agriculture issues including proposal to set the direction of agriculture reforms by first eliminating the most trade-distorting form of subsidies used mainly by the rich developed countries.

The 53-member African Group as well as a large number of developing countries too have rallied around and firmly supported India in opposing rules on e-commerce and bringing in new issues such as investment facilitation and MSMEs into the WTO's agenda, it added.

Under the global trade norms, a WTO member country's food subsidy bill should not breach the limit of 10 per cent of the value of production based on the reference price of 1986-88.

Apprehending that full implementation of food security programme may result in breach of the WTO cap, India has been seeking amendments in the formula to calculate the food subsidy cap.

As an interim measure, the WTO members at the Bali ministerial meeting in December 2013 had agreed to put in place a mechanism popularly called the Peace Clause and committed to negotiate an agreement for permanent solution at MC11 in Buenos Aires.

Under the Peace Clause, WTO members agreed to refrain from challenging any breach in prescribe ceiling by a developing nation at the dispute settlement forum of the WTO. This clause will be there till a permanent solution is found to the food stockpiling issue.