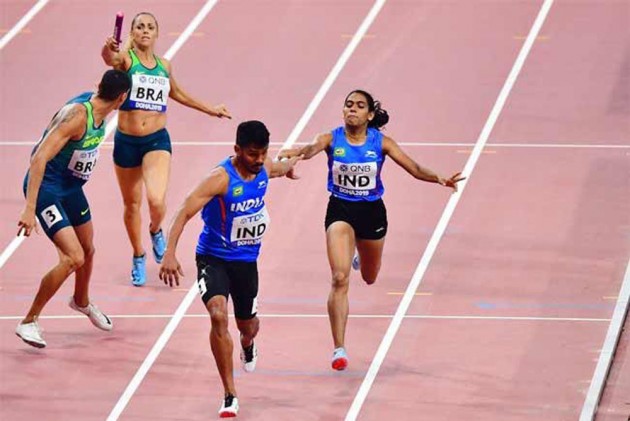 The Indian mixed 4x400m relay team qualified for the 2020 Tokyo Olympics after reaching the finals in the World Championships at Doha, on Saturday.

The top 3 in each of the two heats and the next two fastest qualify for the final of the World Championships to be held on Sunday. India entered the final as one of the automatic qualifiers.

The finalists (top 8) in relay races in the World Championships are automatic qualifiers for the Tokyo Olympics.

Anas ran the first leg and after that Vismaya led the whole second leg, giving India the lead midway into the race. Third leg runner Jisna was overtaken by Japan Poland. The baton exchange between Jisna and final leg runner Noah was not that smooth and there was loss of split seconds.

But in the end, Noah was able to finish third to take India to the World Championships final and Tokyo Olympics.

India finished seventh overall with United States on top of timings chart with 3:12.42. It will be tough for India to win a medal in the final on Sunday but an important objective of the contingent in this championships has been realised. There was an air of relief in the Indian camp.

"Yes, the team has reached the final in mixed 4x400m relay and by virtue of that it has also qualified for the Olympics," Athletics Federation of India's Planning Commission Chairman Lalit Bhanot told PTI.

The mixed 4x400m relay, which was making its debut at the showpiece event, has been one event on which the Indian team has put a lot of hope. It suffered a jolt after world junior champion quarter-miler Hima Das was ruled out due to her back injury despite being named initially in the team.

National record holder Anas was not fielded in the individual event despite breaching the qualifying mark so that he can focus in the relay.

Meanwhile, sprinter Dutee Chand's World Championships campaign ended in disappointment as she crashed out in the first round while 400m hurdler M P Jabir made an exit in the semifinals.

Dutee clocked 11.48 seconds -- one of her worst timings this season -- in the women's 100m heats to finish seventh in her heat and 37th overall among 47 competitors.

Running in the outermost lane, Jabir finished fifth in men's 400m hurdles semifinals heat number 3 and 16th overall among 24 runners with a time of 49.71 seconds. The top two finishers in each of the three semifinal heats and the next two fastest runners qualify for the finals.

Reigning world champion Karsten Warholm of Norway led the runners into the finals with a timing of 48.28 seconds.

Jabir had qualified for the semifinals with a timing of 49.62 seconds on Friday but he could not improve upon it on Saturday. He has a personal best of 49.13 which he had clocked this year.

For the 23-year-old Dutee, who ran in the innermost lane, it was another heartbreak as she had come in this championship with the hope of at least reaching the semifinals but it was not to be.

Dutee's timing was in stark contrast with those of the likes of 2012 Olympic champion Shelly-Ann Fraser-Pryce of Jamaica and last edition silver medallist Marie-Josee Ta Lou of Ivory Coast, who led the heat timings with 10.80 and 10.85 seconds respectively.

This showed how much the Indians are lagging behind as compared to the best in the world.

The timing of the last qualifier for the semifinals was 11.31 seconds and it was well within Dutee's reach but she could not do it. The first three in each of the six heats and the next six fastest qualify for the semifinals.

On the same tracks in April during the Asian Championships, the 23-year-old Dutee had clocked 11.28 seconds during the heats and 11.26 seconds (national record) in the semifinals.

But on Saturday, she came up with her third worst time of the season, after the 11.51 seconds in February and 11.61 seconds in March during the heats in the Federation Cup.

Dutee had exited in the heats in the 2017 World Championships also, clocking 12.07 in the heats.